30 years ago, man stole a SEPTA bus and took it on a wild ride

The hour-long joyride resulted in at least 15 wrecked cars and as many injuries. Incredibly, no one was killed 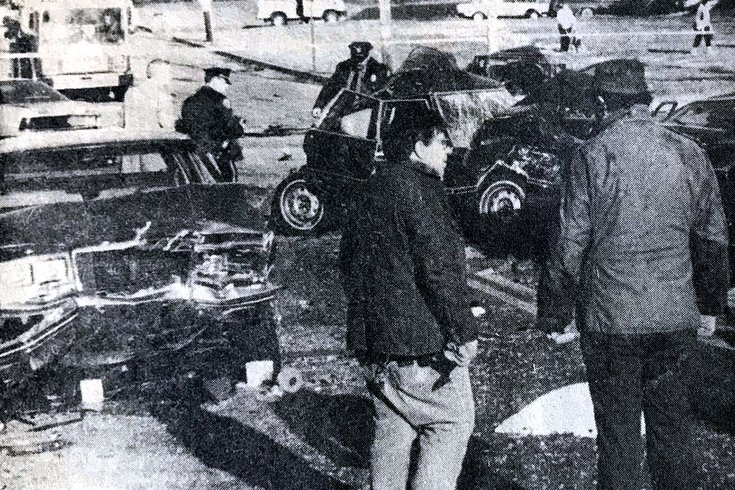 Police officers and bystanders surveyed the wreckage at Red Lion Road and Philmont Avenue in Lower Moreland Township on January 3, 1989. At least nine vehicles were rammed at the intersection by a speeding SEPTA bus stolen in Northeast Philadelphia by a Bucks County man who it on a dangerous joyride.

Thirty years ago today, a man jumped behind the wheel of a running SEPTA bus and took it on a joyride, leaving a trail of destruction and mayhem in his wake. The headline was:

• At least 15 cars damaged or destroyed.

• One state trooper struck and injured.

Here's the wild story from newspaper accounts of the day – including a report by my Montgomery Newspapers colleague Nicole Levicoff – and my own eyewitness account from the grisly scene.

A STOLEN BUS AND A PURSUIT

Glen Alton Barhight of Croydon, Bucks County, 38 years old at the time, entered an open Ro, motor-running SEPTA bus at Frankford depot at Frankford Avenue and Bridge Street in Northeast Philadelphia around 6:30 a.m. on January 3, 1989, and drove it off the lot.

A man matching Barhight's description was thrown off an El train at the depot about 40 minutes before the bus was stolen, officials said.

Described as dazed and confused, the man refused to leave the train when it reached the last stop on the line. SEPTA police escorted him off the train.

That Market-Frankford Line train had originated at the 69th Street Terminal in Upper Darby, near where another SEPTA bus was reported just three days earlier.

Once behind the wheel, Barhight crashed the Route 3 bus into about a dozen parked cars at the depot before he was eventually spotted at about 7:15 a.m. as the bus prepared to cross the Calhoun Street Bridge into Trenton. Officials tried to detain him because of vehicle height restrictions on the bridge, but Barhite continued over the span, striking overhead signs and damaging the roof of the bus.

The bus turned around and headed back into Bucks County via the Route 1 bridge over the Delaware River. Slamming through a barricade, Barhight drove south on the highway.

A roadblock at Route 1 and Street Road in Bensalem was among several attempts made by law enforcement officials to halt the dangerous spree. At one point, when the bus got caught up in traffic, Middletown Township police Officer LeRoy Alexander attempted to pry open the rear bus doors. But traffic cleared and Barhight hit the gas, pinning the officer between the bus and a police car. (Alexander would be taken to the hospital for treatment of injuries.)

A stolen SEPTA bus crashed into a tree at a business along Huntingdon Pike in Bethayres, Lower Moreland Township, on January 3, 1989. Police chased the bus through several municipalities.

Moments later, the Pennsylvania State Police joined the chase, as the bus continued southbound on Roosevelt Boulevard back into the Greater Northeast. At Comly Road, near the old Nabisco plant, a state police vehicle was set up to stop Barhight.

As the bus bounded toward his position, a trooper fired a shotgun at Barhight, who reportedly suffered a grazing wound to the head but nonetheless kept his foot planted firmly on the gas. The bus motored on after plowing through two patrol cars.

At Haldeman Avenue, the bus hit a vehicle before making a right turn onto Red Lion Road. Heading west, Barhight drove through the Bustleton section of Philadelphia before causing another accident at High Road in Lower Moreland, Montgomery County.

Barhight wasn't done, and the worst of the destruction and damage was still to come.

Still headed west on Red Lion, the bus crossed railroad tracks along SEPTA's West Trenton Regional Rail line, before continuing down the hill toward Philmont Avenue, covering the distance of about two football fields at a high rate of speed before smashing through the busy intersection.

The bus slammed nine vehicles, creating piles of wreckage and injuring more than a dozen motorists, some seriously.

'THANK GOD FOR THAT TREE'

Undeterred, Barhight sped up the hill, past Lower Moreland High School on his right and toward the township police building on his left. Quickly, the bus closed in on busy Huntingdon Pike in Bethayres, where Red Lion came to a dead-end.

Barhight decided to swing the bus right, turning north onto Huntingdon Pike, but never got there. The laws of physics caught up with him, the speeding bus forced nearly straight ahead, across the intersection and into a large elm tree in front of the Huntingdon Valley Cheese Shop at 20 Fetters Mill Square. The tree fell on the shop, though further injuries were avoided.

″Thank God for that tree,″ Richard Campbell, who was sleeping in a second-floor apartment above a boutique when the bus hit outside, would tell the Associated Press.

Chased by police through five municipalities, Barhight was finally apprehended at the scene.

The time was about 7:45 a.m. The joyride was over about an hour after it had begun.

Incredibly, no one was killed.

My mother said to get up.

I was still in bed, having worked late the night before as a reporter and assistant editor to help prepare the Today's Spirit weekly newspaper in Hatboro for its regular Wednesday publication.

You're missing all the sirens, she said, as I tried to clear my head and make sense of her words. Something big is going on and you should go investigate, she suggested. Suddenly, I could hear the cacophony beyond the windows of our Lower Moreland home. (It wasn't the last time my mother would alert me to breaking news and send me on my way.)

I jumped up and dressed quickly, grabbing my Nikon EM camera and a coat before running out the door. Whatever was happening was outside the Spirit coverage area, but I knew my colleagues at the Times Chronicle in Jenkintown would be interested.

I could hear sirens to the south. I pulled out and headed in that direction on Huntingdon Pike, which bordered my subdivision. I drove about a mile-and-a-half down the Pike in just a few minutes, before being forced to leave the car along the side of the road and walk toward the ever-louder sirens.

The twisted steel frames of two cars rest in a pile of debris on Red Lion Road, just east of Philmont Avenue, down the road from where the stolen SEPTA bus crashed into a tree, on January 3, 1989.

I saw the bus first, its tail end still jutting out into Huntingdon Pike, but had no immediate idea of the long trail of destruction and injury it had left in its wake. Turning to the east, however, I could see down Red Lion toward Philmont. There was a pile of wrecked cars in the roadway.

Walking down the hill, I took photos of the aftermath. The scene resembled a war zone, or at least ones I had seen on the evening news. Nine vehicles – some with their metal twisted and crunched like an accordion – littered the intersection around Philmont Avenue. Broken glass and auto parts were everywhere. Tires were flattened. Police officers worked the scene as some victims lie on the ground.

Bystanders – or perhaps motorists whose daily commute was disrupted by the speeding bus barging into the signaled intersection – stood around, many looking as dazed as I felt.

There was a pall over the intersection. I had never seen nor experienced anything like it, and I sensed nobody standing there among the wreckage and injured on Red Lion Road had either.

″It was like something from a horror movie,″ Mary Beach, who came upon wrecked cars on her way to work, told the AP. People were walking around dazed, and others lie on the pavement, she said.

Nearly all of the 15 victims were treated at nearby Holy Redeemer Hospital, where four were admitted and eight were treated and released. Several had multiple bone fractures. Another man was admitted with hip and leg fractures to Abington Memorial Hospital, which also received Barhight, who had to be cut out of the bus by emergency personnel. (He was hospitalized under guard.)

A 47-year-old Trevose woman was injured so badly she had to be flown by Medevac helicopter to Hahnemann Hospital in Center City Philadelphia. It was later reported that she was paralyzed in the crash scene at Red Lion and Philmont.

Barhight was arraigned at the hospital on $100,000 cash bail, facing charges that included simple and aggravated assault, criminal mischief, possession of stolen property and unauthorized use of an auto in multiple counties.

Frank Amabile, chief of police in Lower Moreland, told the media that Barhight had prior arrest and convictions on his record, but he would not reveal the nature of those charges.

At a May 1990 trial in Montgomery County Court, Judge Gerald Corso rejected a plea of insanity, instead finding Barhight guilty but mentally ill, the Doylestown Intelligencer reported.

In fact, Barhight had a long history of mental illness and was a diagnosed chronic schizophrenic.

Several of Barhight's victims would ultimately sue SEPTA, alleging the transit agency was negligent in the operation of its motor vehicles. The lawsuits would be dismissed.

But the incredible case would take another wild turn.

Examined 10 days after the incident, Barhight "had no appreciation for his acts ... because of the magnitude of his mental illness," Dr. Arthur B. Boxer, a psychiatrist, concluded.

Barhight told Boxer and two other mental health professionals that he took the bus to escape from Linda Lovelace, the star of the X-rated film "Deep Throat," who he believed had been chasing him around the city for days.

Miss Lovelace, according to Barhight, was wearing an electronic belt that allowed her to control him.