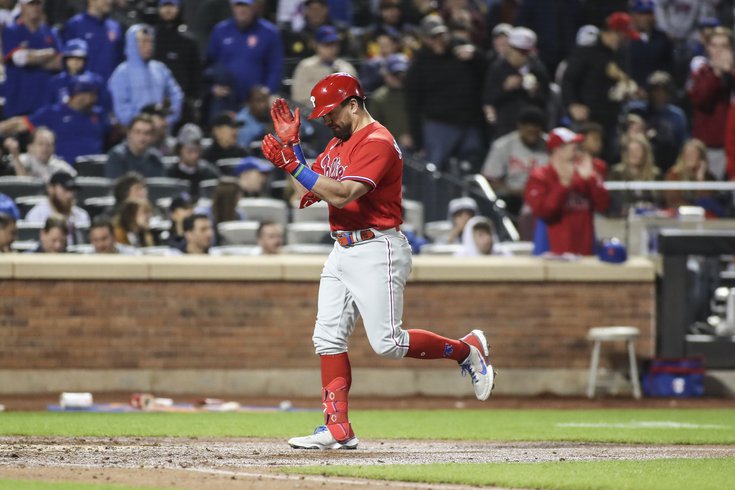 Kyle Schwarber homers against the Mets.

A chance to gain ground on the first-place Mets slipped away on Sunday, as the Phillies fell 10-6 in Queens. The Fightins dropped two of three at Citi Field, bringing their record below .500 yet again (11-12). Despite Kyle Schwarber slugging the ball like an Asgardian god, it wasn't enough for the Phils to have a successful weekend.

The Phillies return to the field at home against on Tuesday against Texas. Before then, I'll give the info on how the three games transpired and hand out five awards for the Phils' series up I-95:

• The Phillies were no-hit on Friday night in a 3-0 loss. Someone has to say it... a combined no-hitter with five pitchers is infinitely less impressive than one done by a single pitcher. The Phils also reached base six times even though they didn't do so with a single base hit. It didn't blow me away! 🙅

• Rhys Hoskins and Kyle Schwarber each homered to lift the Phils in a 4-1 on Saturday.

• Schwarber was destroying baseballs on Sunday, but a poor pitching effort from Zach Eflin (five earned runs) and the bullpen did the team in.

I don't want to give out a "Series MVP" award when the team failed to win the series (it made have a negative effect and turn them into Jerry West on Winning Time...). Regardless, Met Killer is way a more apt (and badass) title for Schwarber.
Schwarber went yard on Saturday. He hit another two homers on Sunday. For a franchise that's seen legendary Met Killers like Pat Burrell and Chase Utley, no one is putting up as wild stats against the Mets as Schwarbs. Here are a couple of tweets that were sent out after Schwarber's second home run on Saturday that illustrate how much he's been raking when facing New York:

There are 1,008 players who have had at least 100 career PA against the Mets since franchise's inception in 1962. Schwarber's current .750 SLG is the highest of all.

Schwarber has been in a funk for most of the early 2022 season. Phils fans are hoping that this is the performance that unlocks him and has him hitting like peak Schwarbs. He might be the only hitter alive who enjoys facing Max Scherzer too!

In the past, PhillyVoice has also done a "Biggest Winner" award, but, again, I don't think anyone deserves one given that they were no-hit/shut out one game and then surrendered 10 runs on Sunday. I'll go outside the box.
I'm sure this isn't what most Phillies fans believe, but I'm all about the Phillies' red alternate jerseys. Yes, I know they're just the spring training jerseys and purists might hate that the team isn't wearing the same color pants and jersey, but I don't care. It pops. It's a great summer color. I'd rather walk around the Jersey Shore in a red Phils jersey than a pinstripe, grey or cream one (baby blue would obviously be the top option for summer fashion).
I don't want to change the Phillies' current uniform structure. Red pinstripes at home, greys on the road, cream for home day games and baby blue on Thursdays works so, so well. I do like sprinkling in the red jersey/grey pants combo on select road games though, particularly if they're on national television like Sunday's matchup was.

I was tempted to give it to "every Phillies position player on Friday" given that they had the embarrassing distinction of having a no-no on them, but I'm taking aim at the announcers.
I know I'm in the minority here, but I loved Alex Rodriguez growing up. LOVED. He was right there with Ken Griffey Jr. and Ichiro (maybe I just liked the Mariners' teal-brimmed hats?) for my favorite non-Phillies. I was the rare kid who dug the frequently cringe A-Rod more than the effortlessly cool Derek Jeter.
Anyway, the KayRod broadcast of Michael Kay and Rodriguez that ESPN has been rolling out as an alternative option for Sunday Night Baseball has been getting panned. This was obviously an attempt to build upon the success of Monday Night Football's Manning Cast with brothers Peyton and Eli. It just hasn't worked out that way.
That likely comes down to Rodriguez's perception as kind of a try-hard dork who was embroiled in controversies throughout his career and did way too much PDA with whatever celebrity he happened to be dating. You could make the argument that Peyton Manning is still the most buzz-worthy NFL player on the planet even seven years after he last suited up because of his "old-fashion charm meets football genius jokester" persona. He could talk up your grandmom or break down 11 personnel with your Uncle Jack for three hours after dinner on Thanksgiving.
I'm realizing now that I should have prefaced that the elder Manning was my favorite non-Eagles football player in my youth. I know how to pick' em!
I typically dig going with a local broadcast over a national one. That goes even more so when there's an option on the table to listen to this A-Rod/Kay combo.

Nothing went right for Alec Bohm in 2021 after an encouraging first campaign in 2020 that saw the third baseman finish second in National League Rookie of the Year voting. He's back in 2022 though!
Bohm reached base on both Saturday and Sunday. His numbers are better than even the most optimistic Phillies fans could've hoped for entering this season. Check out his numbers over the last three years:
I've certainly shared Bohm criticism over the past 12 months, but I'm never afraid to give credit where credit is due. It's worth remembering, and I'm saying this to myself as much as I am to the readers, that success and development is rarely as linear as sports fans want them to be.

Segura failed to reach base in eight total plate appearances on Friday and Saturday. He did register one hit on Sunday, but also struck out twice. That leave Segura's batting average at .229, his on-base percentage at .280 and his slugging percentage at .343. Segura was great for the Phils in 2021, but they're going to need more from him ASAP if they're going to turn things around and make a postseason run.

The Phillies are off on Monday, giving Philly fans time to breathe and properly freak out over the Sixers' Game 1 contest against the Heat. An 8-14 Rangers team that just took two out of three from the defending champion Braves head to Citizens Bank Park for a two-game set. The Phils will then host these same Mets for a four-game series from Thursday to Sunday.
As of right now, Ranger Suarez will pitch on Tuesday, Zack Wheeler will pitch on Wednesday and Aaron Nola will pitch on Thursday.