A season of agony is over for the Flyers. Now what? 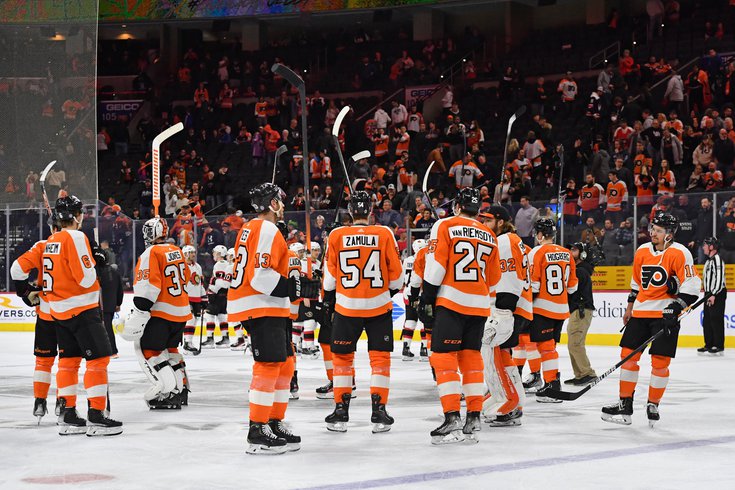 The Flyers salute the Wells Fargo Center crowd following their season-ending loss to the Ottawa Senators.

The final horn sound. The agony was over.

But there was a way forward.

Mike Richards and Jeff Carter were two budding stars, Simon Gagne was in his prime and through selling at the trade deadline, Paul Holmgren brought in goaltender Martin Biron and young defenseman Braydon Coburn.

Then there were rumors abound that the Flyers were going after Danny Briere, the top prize of that summer's free agent class — and they did, indeed, get him.

You knew the Philadelphia Flyers would be back.

The final horn sound. The agony was over.

They weren't the worst team in the league, but after months of playing lethargic, uninspiring, and flat-out boring hockey, it sure felt like they were.

Claude Giroux, the face of the franchise for more than a decade, is gone. In the final year of his contract and with the team no longer able to afford him an opportunity to win, he was shipped to the Florida Panthers after a farewell celebration was made out of his 1,000th NHL game. He's lighting it up down in Sunrise now, with a Presidents' Trophy-winning lineup that is giving him possibly his best, maybe last, chance at hoisting the Stanley Cup.

What's left up here in Philadelphia? A cap-strapped mismatch of banged-up veterans and underwhelming youth. A team with no clear game-changing talent. Just a group of mostly middle-to-bottom of the lineup guys who are too slow to keep up with the rest of the league. And there's seemingly no clear way of fixing it.

It's a tough road ahead.

The players cleaned out their lockers and did their exit interviews on Saturday. They're all painfully aware of how embarrassing this season has been and know that there's a lot to think about over the next few months. But many also tried to leave with some sense of optimism.

Here's a roundup of what was said Saturday from the players, and an important point from one writer.

A top to bottom failure

There really isn't any sugar-coating it at this point. The Flyers were terrible.

The 2021-22 season was a complete failure, and everyone in the organization, from ownership, to general manager Chuck Fletcher, the coaching staff, scouting, the medical team, all the way down to the players are to blame.

"Fifty-seven losses. The head coach fired. An admission that they had failed a franchise legend in the form of sending him to a locale where he just might be able to win a Stanley Cup (read: not Philadelphia). A negative-84 goal differential. This wasn’t just a bad season. The Flyers have had them before — the pre-Eric Lindros 1990s, for example, or the surprise disaster that was 2006-07. This was beyond that. This was a proud team reaching a new low. This was, in short, the worst season in franchise history, a failure on every single level.

"And no one is without blame." [The Athletic]

Cam Atkinson, after his first season with the Flyers, didn't shy away from any of it.

"Every guy’s got to look hard in the mirror and realize we never want to be in this spot again," the 32-year-old winger said Saturday. "What an embarrassment it was for the organization, the fanbase and the city itself. It’s hard to build a culture within an organization and it’s just as easy to lose that.

"We need to find a way to stick together and build that winning culture. Coming to the rink and expecting to win, not hoping to win. I’m just embarrassed, I guess. It’s a crappy feeling. Almost a waste of a year in my mind, but I hope Chuck is going to do some things in the summer to help this team. I want to be here. I want to win here. We will turn this thing around. Have a good summer and get back at it for next year."

Flyers defenseman Ryan Ellis meets with the media from @FlyersTCenter to discuss the end of the season. https://t.co/78dyOjTZVk

Ryan Ellis last played Nov. 13 and hadn't been seen since. A lower-body injury that never got any more specific than that had kept him off the ice, away from the team and out of the public eye for months.

On Saturday, Ellis finally spoke to the media and offered some clarity on what kept him sidelined for so long. He's shooting to be ready for training camp at the end of the summer.

"It’s just more or less a multi-layered problem," Ellis said. "It wasn’t just a one thing fix all and that was the problem, trying to figure out what was going on. It had multiple levels of what the problem was.

"We have a plan. Everyone’s very happy and comfortable with the plan and I’m excited to be ready for training camp. It’s going to be a long summer, trying to get through it all, but I’m excited."

The 31-year-old defenseman was the key return in a three-team trade with Vegas and Nashville last summer — a move that, after one season, no team walked away a real winner from — and was slotted in as Ivan Provorov's partner on the top defensive pairing.

Obviously, that never got off the ground, and with it all happening in the first year on a new team and in a new city, mentally, it took a toll.

"It’s honestly been the hardest year of my life," Ellis said. "Can’t say I’ve been through anything harder. Coming to a new team, this year is probably the most excited I’ve been for hockey. New team, new city, new fans, new building, you name it. Everything was new and exciting. Our team had unbelievable upside to it all. I think with the amount of injuries and whatnot obviously didn’t work out the way we wanted it to."

You have your opinion, Provorov has his

Two seasons ago, before the pandemic paused the season, and even in the bubble, Provorov looked set to finally step up as the Flyers' cornerstone defenseman.

Then Niskanen called it a career. He hasn't been the same since. Things came to a head this season, especially when things were at their worst.

Provorov went through a slump where he became prone to defensive lapses and terrible decision-making with the puck. He started finding his footing again in the final stretch of the season, but by then a terrible season was in the bag.

He finished -20 with a team-leading 24:53 of average ice time, and did not want to hear it from the media on Saturday.

"I don't need anyone to write glory stories on me. You all have an opinion and I have my opinion."

The 25-year-old blueliner is carrying a $6.75 million cap hit and with him struggling, there were rumors back in March that the Flyers might be at a crossroads with their former top prospect.

That's a wrap for Yandle 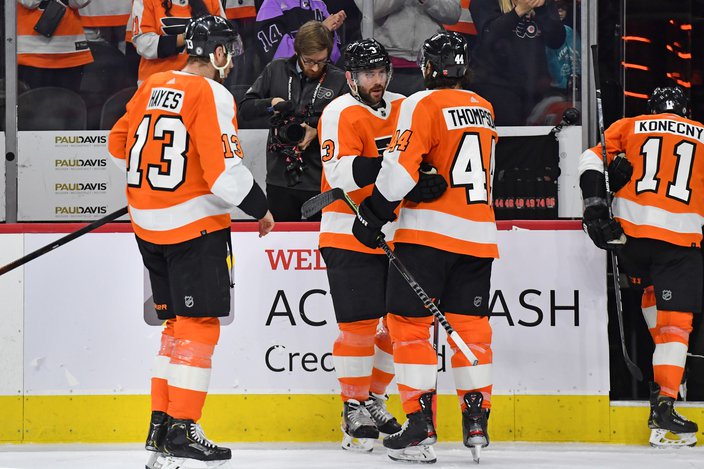 Friday night's loss to Ottawa was Keith Yandle's final game in the NHL.

The Senators and his Flyers teammates stayed on the ice after the final horn to offer hugs and handshakes to the 16-year vet. A pretty clear sign that this was it.

Yandle signed a one-year deal with the Flyers last offseason to be a bottom-pairing defenseman and a power-play specialist. He leaves with an accomplished career, which includes the 989-game ironman streak and as a well-liked personality amongst his teammates.

But it was evident for much of the season that, on the ice, he had nothing left, finishing the 2021-22 campaign an abysmal -47.

"He is probably the best teammate I have ever had," defenseman Nick Seeler said in his exit interview. "He is one of those guys that shows up the rink every day. It sounds cliche, but it is true with Yands. He brings the type of energy every day. I learned a lot from him this year. I really did. It was great to be able to play with him."

Sean Couturier, recovery, and the captaincy

The Flyers were leveled by injuries this season, and arguably the biggest one was losing Sean Couturier in December. He was shut down for good in February after undergoing back surgery but was able to skate with the team again at practice toward the end.

When Couturier is 100 percent, he is the Flyers' top-line center and one of the league's best defensive forwards.

His health will be key to whatever the Flyers are next year. Couturier has also long been considered the next in line for the Flyers' captaincy should Giroux move on. Giroux has moved on.

"It would be an honor," he said. "But it's not something I’m really focused on or what I’m trying to be. Whether I am or not, I’m still going to be the same person, the same player I am and try to lead by example. Try to help the younger guys and share the experience that I have."

Travis Konecny finished the season as the team leader in points with 52, but his goal-scoring took a noticeable drop. In 79 games, the 25-year-old winger scored just 16 goals, whereas in three of his last four seasons he put up 24 in each.

He's taking to analytics to try and get those totals back up.

"I did some work with [Danny Briere] and [analytics director Ian Anderson] in the office and just looking over some analytic stuff, which usually I never paid attention to those type of things," Konecny said. "I don’t know if there was 10 games left and I just started feeling like maybe I was in more scoring positions. It’s interesting stuff so when I took a look at it, it kind of made sense to me where I had gotten away from certain things in the past and where I was now.

"Hopefully, moving forward into the summer, I can try to get my head in the right spot for where I need to be to take it back to where I was."

Joel Farabee, who scored 17 in 63 games after scoring 20 in 55 last season, is going to work on his one-timer and try to hit the reset button.

"I don’t think my one-timer is near where it needs to be," the 22-year-old winger said. "I have been bouncing around some new sticks and things like that. I’ll definitely go home, try some new things this summer and see what I like.

"I’m just trying to hit the reset button here. I think in a long season like this with so many injuries and things like that, it’s easy to be super hard on yourself. I think just take a break from the game for a little bit. Hopefully get back to work and keep working on details so that I can try to improve my game."