Is Rasmus Ristolainen's extension signaling changes ahead for the Flyers? 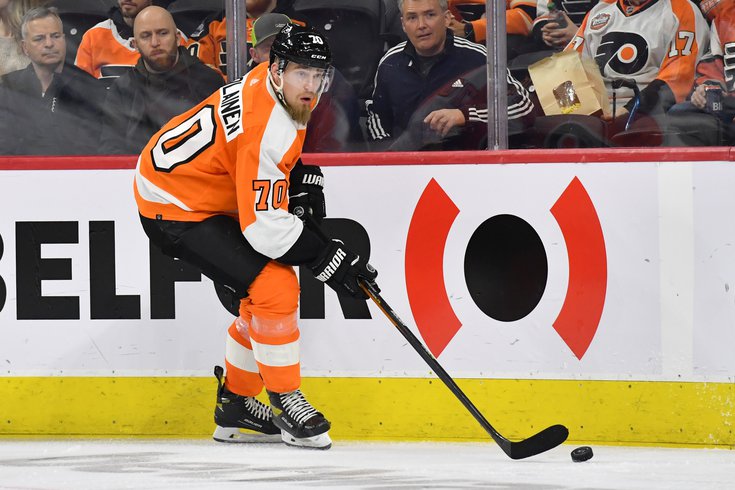 Is Rasmus Ristolainen's contract extension a sign of changes coming to the Flyers?

The Flyers re-signed the physical 6'4", 220-lb. defenseman to a 5-year, $25.5 million extension on Thursday, and based on what Sportsnet's Elliotte Friedman has heard, it may be the first domino to fall in a possible defensive makeover, one that could include a possible departure of Ivan Provorov.

Speaking on Friday's edition of the 32 Thoughts podcast, Friedman said the Ristolainen deal was a bit of a surprise. He and co-host Jeff Marek both acknowledged a league source who had heard rumors about Ristolainen being shopped, but Friedman believes the Flyers had a change of plans that might have been made evident in Thursday night's 6-3 loss to Florida.

"I think Philly is considering some things here. First of all, they really like Ristolainen as a person. They think he fits in, their players like him, he likes them. That's number one. I think that... there's a game that they played on a Saturday afternoon against Washington a couple weeks ago where, and I remember watching it, it was a really tough game. As you know, the Capitals, they're no softies, and [Ristolainen] played them tough.

"You never make your decisions based on one game, but I heard that [the Flyers] looked at it like 'that's the identity of where we want to be, and we think he's a big part of that, and he really competes.'

"I know all the debates about Ristolainen. The Flyers have settled their debate in their minds, they're going with him. I have a feeling that they are going to be re-shaping their roster a bit more and I do wonder about Provorov." [Sportsnet.ca]

The game Friedman was referencing was the Flyers' 2-1 win over the Capitals at home on Feb. 26. Ristolainen played 23:56 and threw eight hits, including a heavy check behind the Flyers' net near the end of the first period. It led to a change of possession and a Cam Atkinson goal at the other end of the ice.


Ristolainen has many detractors among fans and media. They believe his size and the physical style of hockey he plays are canceled out by his inefficiency with moving the puck and suppressing opponent's offensive chances.

But the Flyers paid a heavy price for him last summer, sending Robert Hagg, a 2021 first-round pick, and a 2023 second over to Buffalo to bring in the 27-year old blueliner on the final year of his contract. And GM Chuck Fletcher and co. seem satisfied enough with what they've seen to dedicate a hefty $5.1 million to him for the next five years.

The deal, however, came with immediate speculation over the Flyers' next move. TSN insider Darren Dreger, who first reported Ristolainen's extension, followed it up with a thought that the deal could open the door for a Travis Sanheim trade before the March 21 deadline.

Sanheim, 25, carries a $4.675 million cap hit and will be an unrestricted free agent after the 2022-23 season. He's also been Ristolainen's regular partner throughout the year, and the two have arguably been the team's most consistent defensive pairing, even if that isn't saying much at this point.

Friedman said he believes there is interest in Sanheim on the trade market, but that it doesn't necessarily mean he's going to be traded.

But then there's Ivan Provorov, the Flyers' top defenseman who has struggled immensely this season. The 25-year old is carrying a $6.75 million cap hit in year 3 of a six-year deal, and despite eating up big minutes (he's averaging 25:04 of ice time), he's become prone to defensive lapses and reckless decision-making with the puck.

Marek said that he noticed during Thursday night's loss to Florida that Provorov wasn't on the Flyers' power play. Cam York was, and he had the primary assist on Travis Konecny's second-period goal that brought the Flyers to within one.

Perhaps it's a sign that the team is at a crossroads on what to do with the once highly-touted defenseman.


Didn't even notice that, but yep -- Ivan Provorov isn't a regular on the PP tonight. That's notable. https://t.co/WY4nnejXeQ

"He's really struggled. I think they're facing a decision on what to do here. I never think it's all Provorov's fault, it's just been a really hard year there. [Ryan Ellis] has only played a few games. I just wonder where it's gonna go with him...The Flyers are definitely thinking here...What's his future?

"I'm sure Provorov's thinking it too. 'Is this the right fit for me?' So I just wonder if signing Ristolainen is a sign that there's just a big defensive makeover coming here, because one of the things I heard was that if they sign Ristolainen, it's the first domino in some other things. So I wonder just what are those other things." [Sportsnet.ca]

The trade deadline is March 21. We'll see what happens between now and then.