An era of Flyers hockey ends 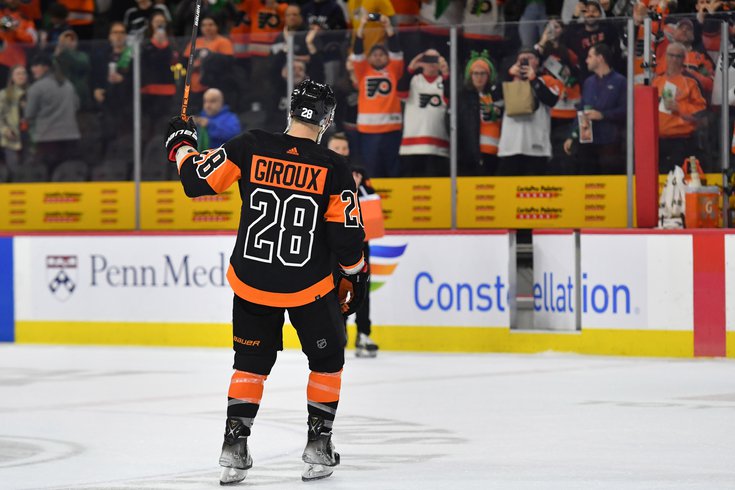 Claude Giroux has been traded. His time with the Flyers is up.

An era of Flyers hockey is over.

Claude Giroux has been traded to the Atlantic Division leading Florida Panthers, where he will have a shot at winning the Stanley Cup.

The trade was made official just past 8 p.m. Saturday night.

In full, the Panthers receive Giroux, forwards Connor Bunnaman and German Rubstov, and a fifth-round draft pick in 2024. The Flyers get prospect Owen Tippett, a 2024 first-round pick, a 2023 third-rounder, and will retain 50 percent of Giroux's salary.

The deal comes in well ahead of Monday's 3 p.m. trade deadline, and closes out a 15-year chapter for the Flyers that saw Giroux grow into the face of the franchise, leading it through arguably the most turbulent decade in its history.

"Any day that you trade your captain is a tough day," general manager Chuck Fletcher said in a statement. "And with how much Claude has meant to this organization and how he has represented himself for 15 years, makes it all that more difficult to say goodbye. Claude is one of the best players to ever wear a Flyer uniform."

The Florida Panthers have acquired Claude Giroux from the Philadelphia Flyers, per @PierreVLeBrun. #TradeCentre pic.twitter.com/QF4PACuXnf

Giroux played his 1,000th NHL game on Thursday, and while the Flyers celebrated the milestone throughout the night's 5-4 win against Nashville, it was clear to everyone in the Wells Fargo Center that this was also goodbye.

When the final horn sound, an emotional Giroux was hugged by each of his teammates, then he took a victory lap and a couple extra curtain calls for fans that cheered him all night and for the better part of 15 years.

"I...to be honest, I've seen a lot of players that I played with, that I liked and...I know it's tough when you leave a team, but I actually didn't realize how tough it is," a somber Giroux said postgame. "I wish I knew back then, but it's not...it's not something that's really fun.

"But saying that, like tonight, just all day we were telling stories and things that happened the last few years, and it was great...yeah."

It was reported after that Giroux wouldn't be on the flight to Ottawa for the team's game the next night, nor would he play Sunday afternoon against the Islanders back home. He was to be held out of the lineup until a trade was completed, with the no-movement clause in his contract presumably waived for a destination he approved of.

Giroux leaves the Flyers as their longest-reigning captain and with his name all over the team's record book. He's second all-time in games played (1,000), points (900), and assists (609) — second only to Bobby Clarke in all three categories — eighth all-time in goals, and the all-time leader in power play points (339) and assists (255).

He was regularly one of the Flyers' best players, making the All-Star game seven times — winning All-Star game MVP in this year's event — and earning consideration for the Hart Trophy (NHL MVP) for the 2013-14 and 2017-18 seasons, when his performance alone was largely responsible for the Flyers making the playoffs.

But for the all the individual success Giroux found, team success was much harder to come by, and through no fault of his own.

It was there early. The Flyers made the playoffs the first four seasons Giroux was a regular member of the team, with the 2010 miracle run to the Stanley Cup Final the peak of it. But that was when Mike Richards, Jeff Carter, and an aging Chris Pronger were the core of a roster built to compete in that window.

In the 2011-12 season, after Richards and Carter were both traded away in the summer and Pronger suffered a career-ending eye injury, Giroux took the reins. He put up 93 regular-season points playing on the iconic "G" line with Scott Hartnell and Jaromir Jagr, then put on an incredible performance in the first-round playoff series against Sidney Crosby and the rival Pittsburgh Penguins. Giroux had 14 points through six games, including that unforgettable goal on the opening shift of the series-clinching Game 6.

It led to then head coach Peter Laviolette calling Giroux "the best player in the world," and made it clear that he was the Flyers' next captain.


But the team never went anywhere after that. The roster as it was when Giroux became captain got older and slower while Paul Holmgren looked for any sort of quick fix as general manager, stagnated for a few years under Ron Hextall while he waited for his prospects to develop, then became today's cap-strapped mismatch of injured veterans and underwhelming youth under current GM Chuck Fletcher.

After a decade, all the Flyers have to show for it: a few spot playoff appearances, often a result of Giroux's play dragging them into the playoffs, one decent run to the second round in the 2020 bubble, and now a team that was expecting to compete but has completely hit rock bottom.

Giroux remained committed to the Flyers through all of it, even up to the point it was evident he was leaving. But the disappointment and frustration with this season was clear. His play still makes an impact, but with the 34-year old in the final year of an eight-year contract, the trade rumors and speculation were impossible to avoid. His talent and experience are much better served with a group ready to win now.

"I didn't think I'd be put in the position to make a decision," Giroux said of his status following an aggravating loss to Montreal last Sunday. "It's been probably the worst year since I'm here. It's been a tough year. I mean, obviously a lot of injuries but I'm not gonna start making excuses.

"But it's been a long year with the way we...I'm not too sure what to say to be honest because it's not a position I want to be in. Obviously there are still some meetings and some things to talk about with the management to see what the game plan is, not just for this year, but for the future."

That future, at least immediately, will play out with Giroux elsewhere.

"He wanted to win, and he was willing to do, he's still willing to do everything he can to win," said Giroux's former teammate and then assistant coach Ian Laperriere last week. "That's G. He's a competitor. He competes [in anything]. You wanna play pool with him? He's gonna compete. He's just got that in him, and that's pretty much the only thing missing in his career right now, winning something."

Giroux has had a career deserving of some hardware. His teammates, current and former, believe that, but the Flyers just can't afford him that opportunity anymore.

He'll be a free agent after the season, and can come back in the summer if the circumstances are right. But the focus now shifts to a Cup run down in Sunrise.

"We'd be happy for him," Sean Couturier, who has played with Giroux since 2011, said of his potential trade to a Cup contender earlier in the week. "I mean especially me, I've been around him since I've started my career. I've learned so much from him and the time and the effort he's put into this organization.

"You just wish him all the best, whether it's here or somewhere else, he's a guy that definitely deserves to win at some point in his career...Wherever it is, I'll be happy for him."