Ahead of Giroux's 1,000th game, former teammate Scott Hartnell had a story that defines G's competitiveness 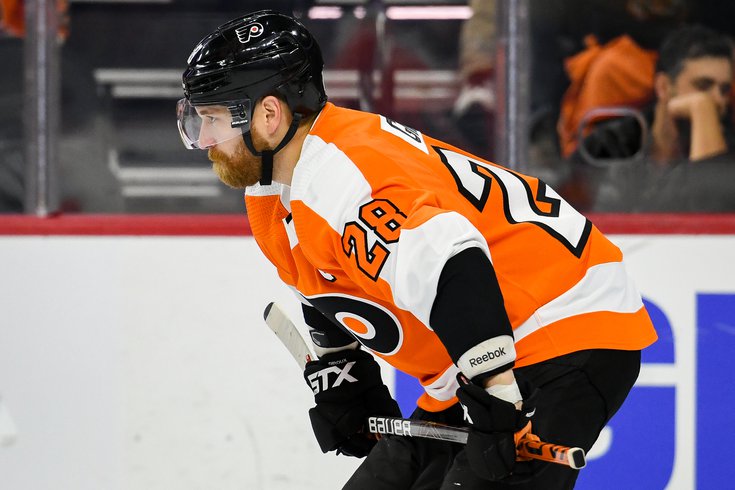 Scott Hartnell can sum up Claude Giroux's competitiveness by a single night in Nashville.

In the lead-up to Giroux's 1,000th NHL game Thursday night — against the Predators of all teams — current and former Flyers teammates Sean Couturier, Hartnell, and Ian Laperriere joined a virtual press conference to talk about the captain's 15-year run to the milestone.

A common through line they all share in the years they've known Giroux: He has an insane drive to win.

"He wanted to win, and he was willing to do, he's still willing to do everything he can to win," Laperriere, now head coach of the AHL's Lehigh Valley Phantoms, said of his time both playing with and coaching Giroux. "That's G. He's a competitor. He competes [in everything]. You wanna play pool with him? He's gonna compete. He's just got that in him, and that's pretty much the only thing missing in his career right now, winning something."

"How about arm wrestling against Chief, Hartsy?" Laperriere asked. "Were you there for that one?"

"I remember that, yeah," Hartnell replied.

As Hartnell told it, the team was at The Stage in Nashville taking in the live music from upstairs.

The table was cleared off. The match was on. And for reference: Berube in his playing days: 6'1", 210 lbs. and TOUGH.

"I was the referee, you know, with your hands on them ready to arm wrestle," Hartnell said. "G kinda let Chief have the first wind, and just like the movie Over the Top with Sylvester Stallone, he just went [swung his arm the other way], just hammered him down and was just in his face, all over him. We were just going bananas!

"I think we actually made Chief leave that bar just because he was so embarrassed that he lost, so that was a pretty funny story."

That's Claude Giroux for you.

"I'm sure there are tons of stories...Whatever he does, play sports or cards or Monopoly, bowling. Whatever little thing, he wants to challenge you. He's gonna give it his all..That's the kind of competitive guy he is."

While Giroux has garnered individual recognition over the years — putting himself among the Flyers' all-time leaders in numerous categories, earning seven All-Star nods, and even receiving Hart Trophy consideration — the Flyers themselves have failed to find sustained success in the last decade, and this season, things hit rock bottom.

Now, with Giroux in the final year of his contract, the March 21 trade deadline approaching, and the time winding down on the 34-year old's window to try and win the Stanley Cup, the shadow of what happens after Game No. 1,000 looms large.

Giroux has been the subject of trade rumors for months, but whether he stays in orange and black or goes elsewhere still isn't clear.

But wherever he ends up, he's a guy teammates current and former want out there.

"Whether it's a big faceoff or a blocked shot, he's the guy that you want out there that competes and does it every time," Hartnell said. "For a leader, it's one thing to talk, one thing to be the best player. But to have his competitiveness and just his will to do anything it takes for victory, it's pretty special."

"When you play with a guy like that, you're pushed to follow his lead and his intensity," Couturier said. "It just makes everyone better around him."