Claude Giroux's 1000th game: a celebration and a fond farewell 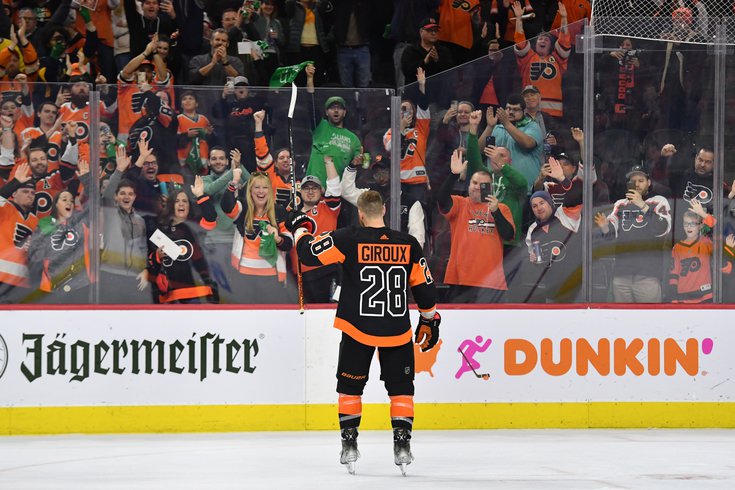 Claude Giroux salutes the fans after the Flyers beat the Nashville Predators, 5-4, Thursday night at the Wells Fargo Center. It was a celebration of Giroux's 1,000th and possibly final game as a Flyer.

A thousand games and a thousand memories for Claude Giroux, many of them prominent fixtures in Flyers lore.

Thursday night made for one more, as the team celebrated their captain's 1,000th NHL game. Players wore special warmup jerseys paying tribute to No. 28, and there was a pregame ceremony with Giroux's family and franchise legend Bobby Clarke on hand to present him with the milestone silver stick, while congratulatory video messages from family, friends, and teammates (current and former) played throughout the night.

But everyone in the arena seemed to understand that Thursday night was just as much of a goodbye to Giroux as it was a celebration.

What a send off.

The Flyers fought through the emotions and the Nashville Predators to win, 5-4, in front of a Wells Fargo Center crowd that hasn't been this packed and this lively in months. An emotional Giroux was met with hugs, congratulations, and likely well wishes from teammates after the final horn, followed by a victory lap and a couple extra curtain calls for the Flyers faithful that cheered him on not just Thursday night, but for the past 15 years.

"Yeah, I don’t feel very comfortable with attention like that," Giroux said postgame. "But seeing that, it was awesome. I mean...they’ve been, the fans and the organization, my teammates, they've been so good to me for so many years and that’s one of the reasons it was pretty emotional after the game...it’s a fun night."

Now comes the part everyone feared, but deep down, knew was coming: Giroux will not be on the team's plane to Ottawa for Friday night's game, nor will he play in Sunday afternoon's home game against the Islanders. He is being held out until a trade is completed. By Monday, Claude Giroux will no longer be a Philadelphia Flyer.

"During the game I was trying to keep it together," the 34-year old said of the emotions that hit Thursday night. "It wasn’t too bad the first two periods, and then the third period hit and the crowd, my teammates, they just made it extra special. I didn’t know what to expect but tonight was pretty awesome."

The emotions hit the fans too.

"I've been almost low-key mourning, seriously," said Sherri Barberini, a fan out of Limerick who was sitting a few rows from the ice to watch warmups with her husband Bruce.

Barberini remembered watching a 22-year old Giroux way back in the 2010 playoffs, in that historic Game 7 against Boston, when he killed off 20 seconds of clock late in the third to help preserve a comeback after being down 3-0 both in the game and the series.

"That was in my mind, that was the beginning of my love affair with him," Barberini said. "The thought that he is not going spend his career with this team...I'm getting choked up just thinking about it."

"It's kind of sad because it's like a farewell, goodbye to Claude and a thank you for all the amazing years that he gave us, being the Flyers captain for so many years," said John Smith out of Cherry Hill, a fan who was at Thursday night's game with his seven-year old son Hunter. "It's tough because we're season ticket holders, so we come to every game, well almost every game, and not to see G anymore...it's tough, he's our favorite player." 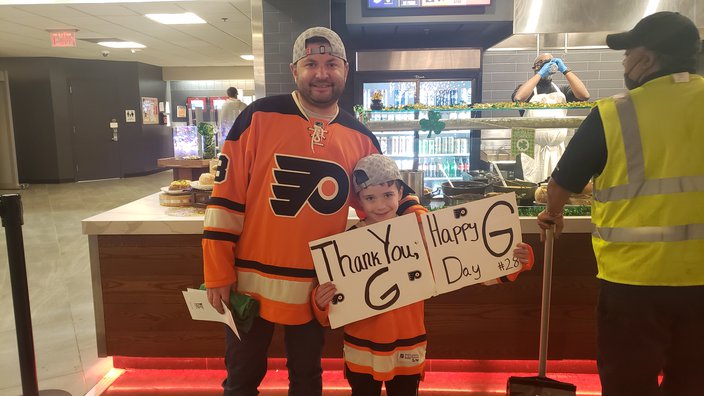 It's exceedingly rare for an athlete to build a relationship with a city that spans more than a decade, but Giroux was just the right fit for Philadelphia to become one of the exceptions.

"I've had a great relationship with the fans and the city," Giroux said. "I get them, they get me. In the warmups I saw there were a lot of fans in the stands. My first lap I was trying not to fall, just focusing on that, but...the fans...I love them, and that's one of the reasons why tonight was so tough."

"He's blue-collar," said Andrew Glickman, a seven-year season ticket holder from Delaware. "He works his ass off, he's not the kind of captain who a lot of people thought they'd want in that he's not out there leading from the front, screaming at everybody. He just shows everybody what you should be doing on and off the ice as a player, every day. He goes out and he works his ass off every chance he gets."


But 15 years can fly by fast, and when the team isn't performing, especially like it hasn't this year, change is almost inevitable.

Kim Casertano and Brandon Thuer from Media were hanging by the Zamboni tunnel, also waiting for warmups to start and bracing for the reality that Thursday was likely it for Giroux as a Flyer.

"It has to be hard decision for him," Casertano said. "On the one hand, I know he wants to win a Cup. He deserves to win a Cup, especially after going through everything with us for so long. But on the other hand, you've been in Philly for 15 years, your wife's here, your kids are here...it's really up to him."


In the postgame press conferences, interim coach Mike Yeo and Giroux's teammates didn't try to dance around the idea that this was it.

Giroux himself was somber and struggled to find the words to describe the night for most of his time with the media. But it was the answer to the final question of the night that gave the clearest direction of where things were going prior to reports coming out that he wouldn't be going on the trip to Ottawa.

Giroux was asked about how Stadium Series at the Linc was the sendoff for Wayne Simmonds in 2019, and what it feels like to possibly be in that position now.

"I...to be honest, I've seen a lot of players that I played with that I liked and...I know it's tough when you leave a team, but I actually didn't realize how tough it is," Giroux said. "I wish I knew back then, but it's not...it's not something that's really fun."

Casertano has a ritual for every game she attends. She goes to watch warmups down at ice-level, holding on to her jersey until it's time to head up to her seat, then she finally puts it on. She said would've gotten close to the glass on Thursday, but a sign she brought wasn't allowed into the arena, it was too big.

But it would've struck a chord with every Flyers fan.

There will always be a spot in my heart