NHL Trade Rumors: Are the Panthers setting up for a Claude Giroux trade? 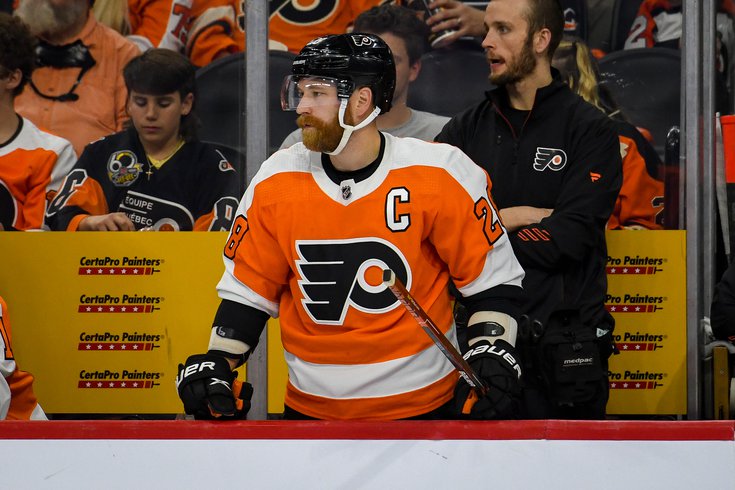 PHILADELPHIA, PA - OCTOBER 15: Claude Giroux #28 of the Philadelphia Flyers looks on during the game against the Vancouver Canucks on October 15, 2021 at Wells Fargo Center in Philadelphia, Pennsylvania. NOTE TO USER: User expressly acknowledges and agrees that, by downloading and or using this photograph, User is consenting to credit photographer. Mandatory Copyright Notice: Copyright 2021 Kate Frese (Kate Frese/for PhillyVoice)

The Flyers' main focus for Thursday night is Claude Giroux and the celebration of his 1,000th NHL game. But something might be brewing in the background.

Earlier in the day, TSN insider Darren Dreger reported that Florida Panthers prospect Owen Tippett is expected to be held out of the AHL affiliate Charlotte Checkers' lineup. The 23-year old winger is believed to be a key piece in Florida's offer for a potential Giroux trade, and his removal from the lineup hints that the Panthers may be getting ready to make a move.

Owen Tippett expected to be held out of Charlotte’s lineup tonight. More speculation in connection to Giroux rumours.

They're not stopping there though, per Pierre LeBrun of TSN and The Athletic. With 88 points and a hold of first in the Atlantic Division, the Panthers are all-in on a Cup run and want Giroux to give them a boost. They're not alone in their pursuit, however.

Habs got their first round pick on Chiarot which some people didn’t think would happen. But Florida is all-in. The Panthers still aim to try and land Claude Giroux if they can swing it.

Wrote LeBrun on The Athletic:

"And here’s the other reason not to wait on Chiarot. The Panthers aren’t done. They remain focused on getting Claude Giroux if at all possible. They’ve had regular and constant communication with the Flyers on him. They would love to get him. My sense is Owen Tippett would likely be part of any Panthers trade offer to Philadelphia.

Imagine Giroux playing alongside Aleksander Barkov on the top line? That would be the plan.

Things should get pretty serious on that front once Giroux is done playing his 1,000th game Thursday night.

Again, all indications are that the Colorado Avalanche also remain interested in Giroux. Is there a third mystery team also in there? I haven’t been able to pinpoint one, but it wouldn’t shock me if there was." [The Athletic]

LeBrun of course noted that any deal is dependent on Giroux waiving the no-movement clause in his contract, but the feeling right now is we'll know if that happens soon after Thursday night's game.

"I mean, if I can be honest, I'm trying to focus on playing the 1,000th game with the Flyers," Giroux said Wednesday. "It's something I'm proud of, something I'm very happy I got a chance to do. Then after that it's gonna be a change in mindset a little bit and we'll see how things are gonna go."

Colorado, which was originally favored as an ideal fit for Giroux, has fallen back in recent weeks but is still reportedly interested. However, the team's trades for defenseman Josh Manson and center Nico Sturm, combined with captain Gabe Landeskog's absence after knee surgery muddies up exactly where they stand.

Giroux, 34, is in the final year of his eight-year contract. With 42 points on the season as the Flyers' top-line center, he's continuing to play at a high level and can definitely make an impact on a Cup-contending team. Though that's if he even wants to leave Philadelphia.

The trade deadline is Monday at 3 p.m. ET.