The Flyers are bad, let's look at mock drafts and prospects 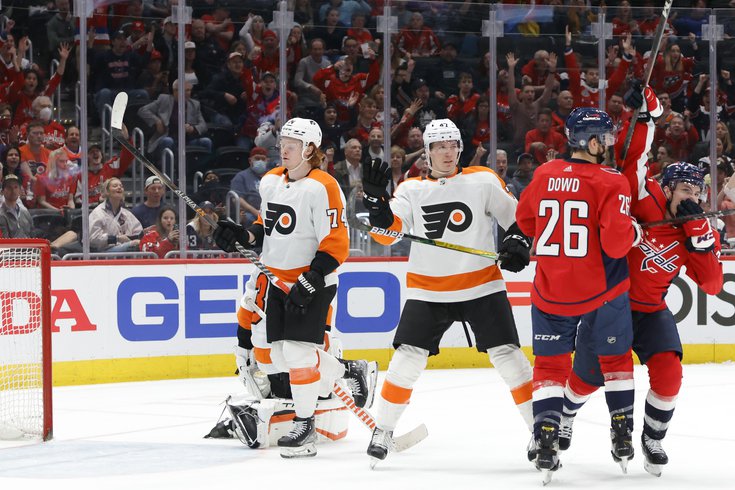 One of the many times the Flyers got scored on in Tuesday's 9-2 loss to Washington.

Every time I think the Flyers have hit rock bottom, the hole just gets deeper.

It didn't end after multiple winless streaks, including a 10 and then a 13-game one that set the franchise record. It didn't end after they had to ship one of the best players in team history to Florida (he's loving it down there by the way) for an uninspiring return, and it probably won't end even after they were embarrassingly outscored 13-2 on back-to-back nights.

They're banged up and beaten down. I think this lineup comparison from the Inquirer's Giana Han on Wednesday really puts that into perspective.

But at the end of the day, the Flyers are just BAD.

They're 23-40-11 and a spot away from the basement in the Eastern Conference. The club's single-season record for regulation losses is 48. They have eight left to play this year, and at this rate, they just might match it.

Chances are you're already well aware of the Flyers' futility if you're reading this and that an 'aggressive retool' has about as much of a shot of working out as this team does scoring on a power play (they're dead last in the NHL at that).

But they'll at least end up with a high draft pick, and since that always provides at least a sliver of hope, let's take a look at some mock drafts and prospect rankings to see who might be available for the Flyers this summer.

As of Thursday, the Flyers would hold the No. 4 overall pick in the draft, barring a ping-pong ball-related miracle/disaster. According to Tankathon's projections, they have a 13.7 percent chance of retaining that pick and have the following odds of moving up or slipping back.

The consensus No. 1 pick is 18-year old center Shane Wright, who has a staggering 94 points (32 goals, 64 assists) in his second season with the OHL's Kingston Frontenacs. He isn't the most naturally skilled player around, but as you'll see in EliteProspect's analysis below, his vision and anticipation are off the charts and combine to make him an exceptional playmaker.

There's been debate over whether he's the clear choice to go first overall, but ultimately there shouldn't be too much to think over for whichever team selects first.

Past that, here's a look at EliteProspect's Top 10 (including Wright) from last month:

We can't cover every prospect on that list today, but there are two centers in particular I want to highlight as they could address one of the Flyers' longstanding and greatest needs: a pure goal-scoring threat.

Rated the second-best North American skater by the NHL's Central Scouting, Cooley is committed to the University of Minnesota, so he won't make the jump to the NHL right away. But he's fast, sees the game even faster, and attacks the net.

His 23 goals and 63 points are the second-most for the U.S. National U18 Team this season, though he's played nine fewer games than its leader Isaac Howard (25 goals, 69 points).

His size is a knock on him, but his quickness and creativity have more than made it up for it so far. When the puck is on his stick, he generates scoring chances.

"Cooley is a dynamic player. When he has the puck on his stick you instantly notice him because of his high-end speed, skill and offensive IQ. He can make highly creative dekes and passes at full speed. The pace of his game is why I think he will be a top NHL player. He takes pucks up the ice and to the net often. Cooley lacks size, but he plays hard. He can drive play at even strength while also having the vision and shot to be a power play threat running a unit from the walls. He projects as a first line forward; if it’s as a center it would be a low-end first line center in the NHL." [The Athletic]

And Cooley's U18 coach, Adam Nightingale, told NHL.com this week that his skating, smarts, and drive will translate well to the NHL.

"He's obviously a really gifted skater, but I think that he's ultra-smart, and he's competitive. When you combine all those together, those guys seem to have success. He's a driven kid, he's low maintenance, so, obviously a really bright future for him." [NHL.com/NHL Draft Class podcast]

With the current draft order projected as is (again, barring the lottery), Tankathon has Cooley going fourth to the Flyers.

Savoie is the No. 3 rated North American skater by the NHL's Central Scouting, was the third top prospect overall in Sportsnet's March prospect rankings, and the second-ranked on Scott Wheeler's list of 64 for The Athletic at midseason.

After watching him for even just a few minutes, it's easy to see why he's so highly regarded. Savoie is quick, shifty and has a wicked shot that would be more than welcomed by the Flyers, or any NHL team, in the next year or two.

In his first full season of junior hockey for the Winnipeg Ice, Savoie has 34 goals and 86 points, which is good for the team lead and a three-way tie for seventh in the Western Hockey League as of Thursday.

When he's on the ice, Winnipeg has had little problem creating offense.

"There isn’t a player in this draft class whose game thrills more than Savoie’s does. Inside the offensive zone, he’s lethal. He’s got extremely quick side-to-side hands that help him beat defenders one-on-one off of cuts. He’s got an NHL shot (which he can place with pinpoint accuracy from a bad angle and rip by a goalie clean from a distance, but he also loves to change up and slide five-hole). He’s excellent in traffic because of his craftiness and maneuverability into scoring spots. He’s a burning skater with underrated (I can’t stress this enough) explosiveness that allows him to win races, separate in transition, and put defenders onto their heels." [The Athletic]

With Claude Giroux now elsewhere, Sean Couturier will likely slip back in as the top-line center when he returns from injury next season. But the Flyers don't have anyone waiting in the wings, at least not with the kind of upside Savoie brings, which is why Bleacher Report had him going sixth to the Orange and Black in its post-trade deadline mock draft.

Along with their first, the Flyers have will have five more picks in the third, fourth, fifth, sixth, and seventh rounds when they head to Montreal for the draft in the summer. They lost their second-rounder and an extra seventh when they dumped Shayne Gostisbehere to Arizona for no return.
The 2022 draft class is generally considered to be a weaker one, but there's still speed and skill to be found here, and after watching this team the past few months, the Flyers desperately need it.