Flyers shift to what's next after unsurprising trade deadline 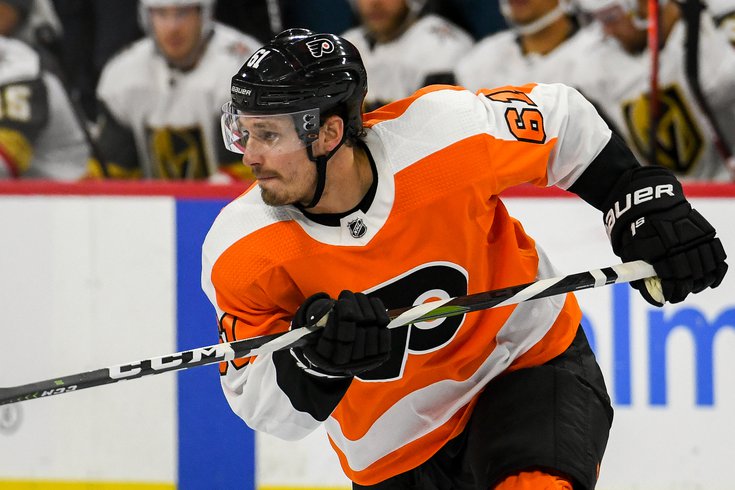 The Flyers dealt defenseman Justin Braun to the New York Rangers on Monday.

There were no surprises on deadline day.

Not for Chuck Fletcher, and probably not for Flyers fans either. Really, the band-aid was ripped off Saturday night with the Claude Giroux trade.

On Monday, everything went pretty much as expected. Well, aside from some very long waits on the NHL's call registry leading up to the 3 p.m. ET cutoff.

Defenseman Justin Braun was traded to the New York Rangers for a third-round draft pick in 2023, and forward Derick Brassard was sent to the Edmonton Oilers for a fourth-rounder also in 2023 and with the Flyers retaining half of his $825,000 cap hit.

"I think it went exactly as we expected," Fletcher said. "We had been receiving a lot of calls for Justin Braun, so we expected that we would be able to move him. Derrick Brassard, a very versatile veteran forward who has played an awful lot of playoff games, I expected we would move him as well.

"At this point we’re carrying 18 (skaters) and two (goalies) so I think we were happy moving those two players and picking up a third and fourth round pick. We have 20 games left to play so I think we’re in a good spot."


Braun was held out of Sunday afternoon's game against the New York Islanders. It was an obvious tell he was on his way out.

Fletcher even said pregame that the decision was made out of precaution for a likely trade.

"We’ll see what that means over the next day, whether we move him or not," the Flyers' GM said Sunday. "He plays really hard. He’s a guy who blocks shots and takes hits. I just thought it would be prudent to at least resolve this over the next 24 hours and just hold him out for today."

What it meant was the 35-year old blueliner, who is on an expiring two-year deal at a $1.8 million cap hit, would be leaving Broad Street for a playoff run on Broadway.

The Rangers, who also acquired Andrew Copp from Winnipeg, Tyler Motte from Vancouver and Nick Merkley from San Jose for their forward depth, are second in the Metro Division at 40-18-5 (85 points).

Braun has 16 points (five goals, 11 assists) and 114 blocked shots in 61 games this season, averaging 20:02 of ice time. He's spent the past three years in Philadelphia as a reliable middle-bottom pairing defenseman, even in the disaster that the 2021-22 campaign has been for the team.

With the Rangers, Braun figures to give them an extra blue-line option behind the reigning Norris Trophy winner Adam Fox, Ryan Lindgren, K'Andre Miller, and Jacob Trouba. 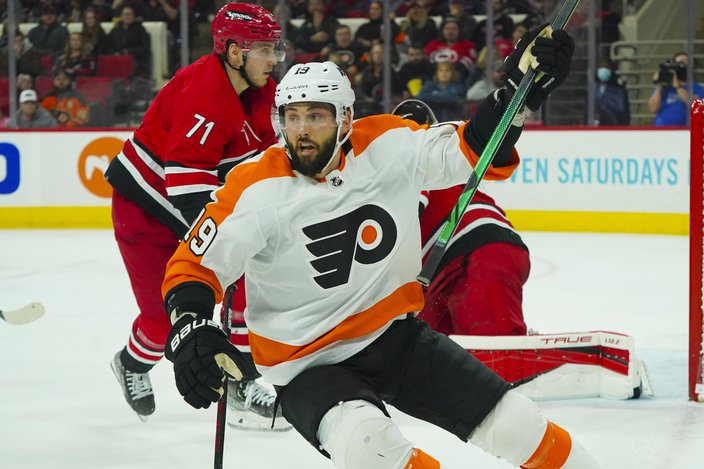 Brassard, meanwhile, will likely be a depth forward for the Oilers, but comes with a wealth of playoff experience. The 34-year old went to the Stanley Cup Final with the Rangers in 2014 and the Eastern Conference Final several other times – Rangers in 2015, the Ottawa Senators in 2017, and the New York Islanders in 2020.

He has six goals and 10 assists in 31 games played this season, but a nagging hip injury has pulled him in and out of the lineup several times until he was able to return for good on Feb. 26.

Edmonton, occupying third in the Pacific Division, has been looking to take the next step with their superstar core of Connor McDavid and Leon Draisaitl. Maybe the wisdom will help.

The Flyers now have a total of nine picks in a draft two summers from now. The 2023 class is expected to be a deep one, but Fletcher said taking those picks was a mix of assistant GM Brent Flahr's preference and the teams they traded with not having the picks available for 2022 (that does check out with the Rangers and Oilers, according to PuckPedia.)

And these trades, combined with Giroux's, do of course fly in the face of a season where the Flyers expected to compete then had just about everything fall apart on them.

"None of us anticipated being where we are now," Fletcher said. "We thought we would be a competitive team. The vets were all excited going into this season. I don’t think any of us anticipated being here. Believe me, it hit home a lot earlier than today. When you trade a player like Justin Braun that has been such a great veteran, and again a really solid contribution for our team, it certainly puts it in perspective." 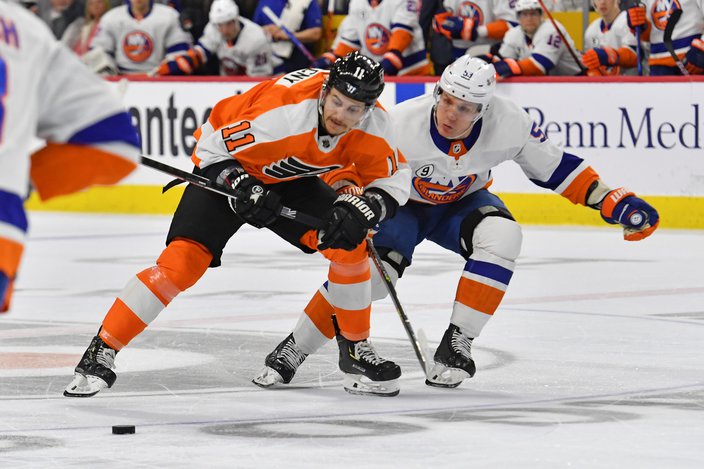 The Flyers have 20 games left. In a lost season like this, you use that time to evaluate what you have, and for pride's sake, try to finish strong.

"I think there is an opportunity for some of the younger players to gain more experience," Fletcher said. He went on to cite Morgan Frost's performance on Sunday centering a line with Oskar Lindblom and new addition Owen Tippet.

"It looked like he had fun playing with Tippett," Fletcher said of the 22-year old, who has struggled to find his footing in the NHL. "They move the puck. They had some energy. For young players like that to maybe get an opportunity to have a bigger role because Brassard’s not here, or young defensemen that play a little bit more because Braun isn’t here, those are the opportunities that are hard to get sometimes in the regular season. These opportunities are presenting themselves to many players."

And with the captain of the past decade now elsewhere, it's also time to see where new leadership might emerge.

"I certainly expect Frost, [Cam York], Tippett, [Travis Konecny] and [Joel Farabee] and all these kids to get a pretty good look here and play bigger roles," Fletcher said. "In the case of a guy like Konecny, and even Farabee, I know [head coach Mike Yeo] challenged them [Sunday] that it’s now their time to take on a little bit more leadership too.

"They’re guys that have been here a long time now, especially Konecny. It’s time to not follow and maybe set an example. I thought both were outstanding [Sunday]. Not just because they got two assists but I thought their effort, their energy, just looked like they were enthusiastic contributors. That bodes well for us."

Konecny was an interesting name in that group because, in hockey terms at least, he isn't so young anymore. At 25 and in his sixth season as an NHL regular, Konecny, like a lot of Flyers, took a step back this season, with just 10 goals and 28 assists in 60 games.

Konecny has quietly been playing better of late though. He notched two assists in Sunday's win skating with Farabee and a much healthier Kevin Hayes, and has six points in his last seven games.

For better or...well, you can't really do much worse...the Flyers are shaping up to look different next season. Maybe Konecny takes that next step as one of its core leaders.

• Fletcher mentioned both Sunday and Monday that part of deadline talks is getting a feel for what moves could be possible in the summer. "Things will certainly change over the next month or two," he said. "But one thing about the trade deadline, maybe with one or two exceptions, you basically speak with every team in the league. You get a good feel for what they’re trying to accomplish."

• Defenseman Ryan Ellis, the Flyers' big get from the three-way trade with Nashville and Vegas last offseason, is officially done for the season. Not much of a shocker, really. He played four games early on and has been out ever since with a lower-body injury. Fletcher said the Flyers' medical team is still exploring recovering options and danced around the question of if he needed surgery. "We’re just looking at different options here to get him healed up." The goal is to have Ellis ready for 2022-23's opening night.

• Mayhew Mania was short-lived. Forward Gerry Mayhew was placed on waivers Saturday and picked up by Anaheim on Sunday. The 29-year old had a respectable 25-game run but quickly fell out of the Flyers' lineup. Fletcher cited a log jam at right wing with Konecny, Cam Atkinson, Zack MacEwan, and now Tippet, with prospects Bobby Brink and Wade Allison hopefully on their way as the reason for the move. "I thought this might give Gerry an opportunity to stay in the NHL for the rest of the year and hopefully get some meaningful minutes for his career," he said.

• Scott Laughton, who's been out with a concussion, is close to coming back, but has a couple more steps to go before he's medically cleared to play again. He'll join the team on the five-game road trip beginning Tuesday night in Detroit, and has an outside chance of playing before it's over. If not, the April 2 home game against Toronto is the next date in mind.

• There was trade interest in backup goaltender Martin Jones, but nothing ever materialized. He'll play out the rest of the year behind Carter Hart. "To be honest with you, [Samuel Ersson] is out for the season, [Kirill Ustimenko] is still battling injuries, [Felix Sandström] is healthy now but has been battling injuries," Fletcher said. "We wanted to be a little bit careful here when we have 20 games to go and Lehigh Valley (AHL) is battling for a playoff spot. If there was something meaningful, we would’ve looked at it. Nothing really materialized."