Flyers notes: The post-Giroux era begins with a 2-1 win over Isles

Hayes scored twice, Tippett impresses in debut, and Braun could be on the move 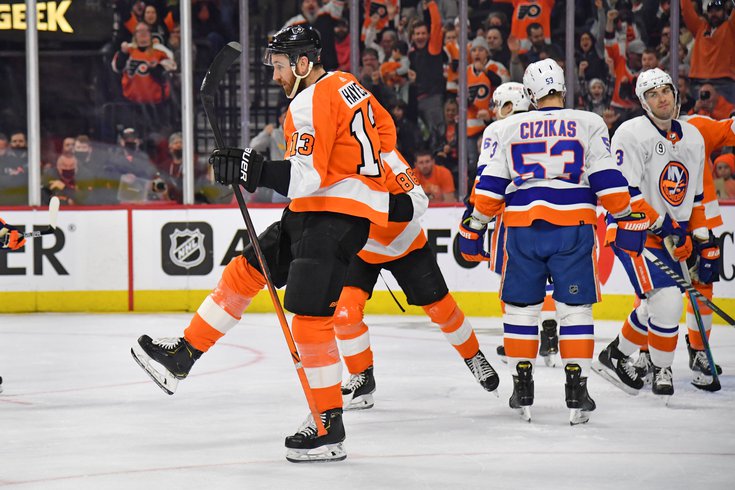 Flyers center Kevin Hayes celebrates one of his two second-period goals against the Islanders on Sunday.

The Flyers' first game following the Claude Giroux trade was always going to be strange. There's no getting around that.

For the first time in well over a decade, a No. 28 sweater was nowhere to be seen in the pre-game hype package, and the team took the ice without a captain.

But life, and the NHL season, goes on. And on Sunday afternoon, the Flyers kept the New York Islanders (who have had plenty of their own struggles) mostly in check, while receiving solid performances from three key pieces moving forward and their newest addition, to win 2-1.

The line of Kevin Hayes (C), Joel Farabee (LW), and Travis Konecny (RW) drove the offense on Sunday, with Hayes scoring both of the Flyers' goals.

With the Flyers trailing 1-0 just shy of five minutes into the second period, Islanders defenseman Sebastian Aho collected the puck from behind his own net and tried to breakout. Farabee was right behind him, poking the puck right to Konecny, who then fed it to Hayes at the bottom of the right circle. There was nothing goaltender Ilya Sorokin could do.

Later in the period, after a Kiefer Bellows hooking call put the Flyers on the power play, new winger Owen Tippett took the puck from the top of the left circle, stepped in and fired a shot that bounced up in front of the crease. Farabee batted the puck out of the air then, with one hand on his stick, pushed it to Hayes in a near identical spot in front. Same result. 2-1 lead, Flyers.

"I thought that his decisions with the puck were outstanding. I thought that he was on the right side of things all night, and obviously a huge part of why we won the game today."

Farabee now has five points in his last four games, and 27 points on the season (12 goals, 15 assists). Following Giroux's 1,000th game on Thursday, there was a good amount of praise toward the 22-year old, from both Giroux and Yeo, on the captain's way out. He'll no doubt play a critical role in what the Flyers become the rest of this season and beyond.

As for Hayes, he's looking more and more like the version of himself from the 2019-20 season after returning from a groin infection earlier in the month. In his last eight games since returning to the ice he has four goals and three assists.

"I feel better," Hayes said. "Like I said before, it's honestly night and day how I felt compared to my previous couple of comebacks, and we already talked about it and figured something out that we didn’t know at the time. It took a while to get it out of my body and just skating, working out and getting my confidence back." 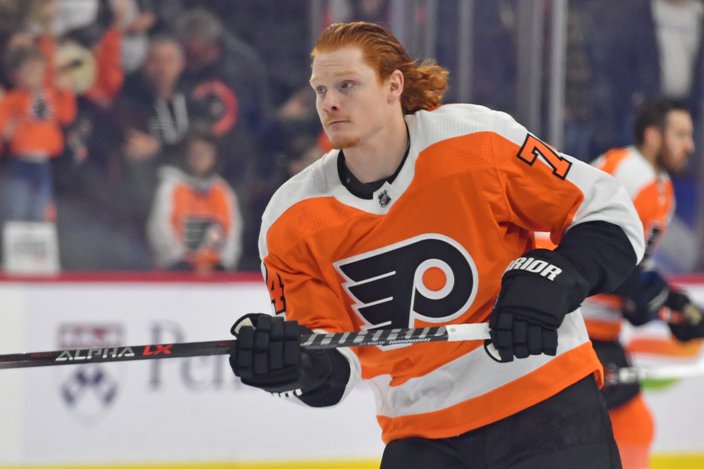 The key piece in the Giroux trade was inserted into the lineup immediately, playing right of Morgan Frost (center) and Oskar Lindblom (left wing).

The 23-year old is obviously not going to be a replacement for Giroux. But all things considered, he had an impressive debut.

Tippett drew a hooking call on New York's Casey Czikas in his first shift, and although nothing came of the ensuing power play (a Farabee slashing call ended it early), Tippett was moving, trying to find open ice to get a shot off.

In the second, with 14:00 left, Tippett picked up a blocked shot off the draw and rifled his own right off the post. Then, nine minutes later, his shot from the top of the right circle on the power play started the sequence that led to Hayes' second goal.

"He's a shooter," Yeo said of Tippett a couple hours before puck drop. "He wants to shoot it, and has a great shot, so that's something that I think can be real beneficial for our group."

A scoring touch is something the Flyers have severely lacked all season. They've been snakebitten when it comes to finishing off scoring chances. Tippett, who had six goals in 12 games while playing for Charlotte in the AHL, won't necessarily fix that problem entirely, but at least you know he'll be looking for the net when he has the puck.

Travis Sanheim broke some ankles in this win, especially near the end of the first period.

The 25-year old defenseman made a deke that caught Czikas completely flat-footed along the boards with a 1:37 left in the opening frame, then skated in toward the high slot and fired a shot that came right back to him for a couple of extra steps and another attempt.

Sanheim played 23:03 and put four shots on goal. When he's able to drop in on offense like he did Sunday against the Islanders, it's a real problem for the opposition.

Justin Braun was held out of the lineup Sunday. The trade deadline is 3 p.m. Monday. You can do the math there.

"There’s been a lot of teams calling on Justin," general manager Chuck Fletcher said pregame. "We’ll see what that means over the next day, whether we move him or not. He plays really hard. He’s a guy who blocks shots and takes hits. I just thought it would be prudent to at least resolve this over the next 24 hours and just hold him out for today."

Braun, 35, has been a relatively reliable defenseman considering how this season has gone. Skating in 61 games, he has 16 points (five goals, 11 assists), averages 20:02 of ice time, is plus-3, and has blocked 114 shots.