After winning the NCAA title in Denver, top prospect Bobby Brink will make his Flyers debut 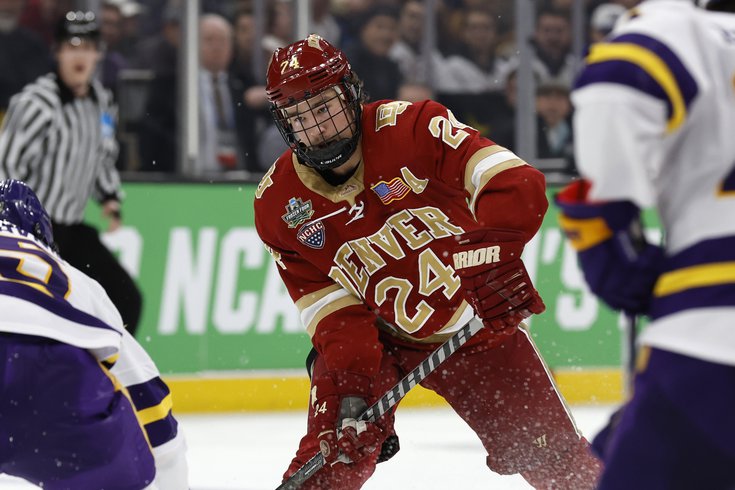 Bobby Brink won the national championship with the University of Denver on Saturday, signed his entry-level contract with the Flyers on Sunday, then skated in his first pro practice on Monday.

It's been a whirlwind few days, and they'll continue on for the 20-year old winger when he makes his NHL debut at Washington Tuesday night.

Brink, who was taken by the Flyers in the second round of the 2019 draft, is the third college signing the team has made for the last stretch of a lost season, and despite his smaller stature (5'9", 163 lbs.), he could be the one that makes the biggest impact.

"He certainly has that potential," interim coach Mike Yeo said Monday. He likened Brink's playstyle a bit to Cam Atkinson's, the longtime Columbus Blue Jacket and current Flyer, who has enjoyed a successful career as an undersized forward.

As a junior, Brink produced for the Pioneers this season, putting up a nation-leading 57 points (14 goals, 43 assists) in 41 games. He was named a finalist for the Hobey Baker Award (given to the best men's player in college hockey), and his performance in the NCAA Tournament was key to Denver's national title run.

In the quarterfinals against Minnesota-Duluth, Brink created a turnover in the offensive zone then made the pass that set up the tying goal late in the first period.

Cole Guttman (#GoBolts) ends Ryan Fanti's shutout streak and gets @DU_Hockey on the board, tying the game at 1-1 in the first period.

Then, in overtime of the Frozen Four against Michigan, Brink collected the puck in the corner and zipped a feed through four defenders to teammate Carter Savoie for the game-winner.

Hopefully, these are all signs of a vision and offensive touch that will translate to the NHL level, giving the Flyers an element going forward that they've sorely lacked for the majority of this season.

With 10 games left in the regular-season schedule, it at least looks like the Flyers will give Brink an immediate opportunity to prove it.

In Monday's practice, he skated on the second line with Scott Laughton (center) and Travis Konecny (left wing) and was on the top power-play unit with Konecny, Joel Farabee, Kevin Hayes and Travis Sanheim.

Yeo didn't want to lock that second line in just yet, he said afterward, but he did confirm that Brink would be on the power play and doesn't want him to shy away from what worked in Denver.

"Don't defer," Yeo said. "Sometimes for younger players, it can be a little bit intimidating when you're playing out there with older players. Instead of doing what's instinctual or even what you should be doing, or more importantly, taking what the other team's giving you, you start to force things and try to make plays that you think your teammates might want you to do.

"So go out there and do the things that come naturally to you. I think that if he does that he'll be fine."

Watch live as Flyers forward @BobbyBrink19 meets with the media from the @FlyersTCenter ahead of his NHL debut on Tuesday. https://t.co/fNnGyYgPlM

Defenseman Cam York, who has started to get settled in with the Flyers this season and played with Brink on the U.S. junior team, had the same advice.

"Just play your game," York said. "I think sometimes it's the bright lights, it's the NHL, you think you gotta do something a little bit different now that you're up here, but it's the same game," York continued. "We play hockey our whole lives and nothing changes. So play your game, do your thing, and go have some fun."

Brink joins forward Noah Cates and defenseman Ronnie Attard as the college prospects who joined the Flyers for the rest of the season after their collegiate careers wrapped up. He's also the third player from the 2019 draft class to make the team alongside York and Attard.
Cates and Attard, both 23, have held up reasonably well since their NHL debuts. Cates has scored twice and averaged 14:01 of ice time through five games as a steady bottom-six forward, and Attard has a goal and an assist through five games and 15:40 of average ice time as a middle-bottom pairing defenseman.
York, 21,  has 10 points through 29 games and has steadily taken an increasing role on the blue line as the year's gone on.
With him being the Flyers' 2019 first-round pick, and Brink the second, both figure to be a bigger part of the team's plans long-term.