The Flyers came nowhere near the playoffs, so here's a guide to see who you might want to pull for 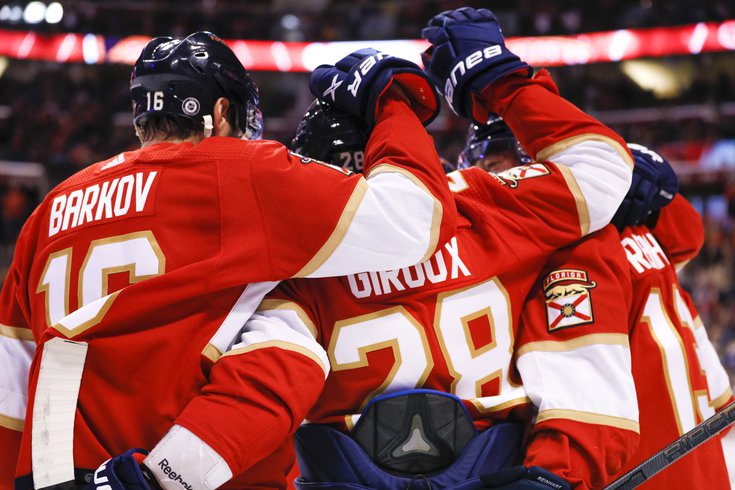 Aleksander Barkov (left), Claude Giroux (center), Sam Reinhart (right), and the Florida Panthers head into the NHL's Stanley Cup Playoffs as one of its top seeds.

But while they begin an offseason tasked with finding a way out of the NHL's basement, fans aren't without other options.

- There are the Phillies still early into a new season and trying to slug their way to October.

- The Sixers in the second round of the playoffs after a first-round series that was in cruise control one minute then on fire the next (and now Joel Embiid's out indefinitely, not good, not good!)

- The Union going strong as one of Major League Soccer's best, looking for another shot at the Eastern Conference title and the MLS Cup.

- And then I guess the Philadelphia Stars in the new USFL too...with whatever the hell this is.

But for anyone looking to stick to the ice, an exciting couple of months are ahead in a postseason that's going to be filled with speed, skill, and creativity (basically the antithesis of Flyers hockey).

You can watch the playoffs stress-free and enjoy all the games for what they'll be, or you can hop on another team's bandwagon for a bit and ride that for however far it'll go. Let's face it, if you're a Flyers fan, you've already made that call a month ago.

Regardless, we'll be running a bandwagoner's guide to the Stanley Cup Playoffs for both the Eastern and Western conferences.

1. Carolina Hurricanes (54-20-8, 116 pts.): The Canes have been one of the funnest on-ice products to watch the past few years, and this season's team has been Rod Brind'Amour and co.'s best yet. They set the franchise record for regular-season wins (54) and points (116) on the way to clinching the Metropolitan Division, doing so with a group of five 20-plus goal scorers led by star forwards Sebastian Aho (37) and Andrei Svechnikov (30).

You'd think recent injuries to starting goaltender Frederik Andersen and then backup Antti Raanta would be huge concerns heading into the playoffs (they probably still are), but in came prospect Pyotr Kochetkov to hold things down in net on short notice.

Concrete jungle where dreams are made of pic.twitter.com/e4d6AYvde9

1. Florida Panthers (58-18-6, 122 pts.): Claude Giroux. If you're running with the Panthers for this one, it's because you want to see Giroux get the Cup. And the Panthers have maybe the best chance of pulling that off for him. Since the trade away from the Flyers last month, the former captain has been on an absolute tear, with 23 points (three goals, 20 assists) in 18 games. Boasting one of the most complete lineups in the league top to bottom – one headlined by Sasha Barkov, Jonathan Huberdeau, Sam Reinhart, Anthony Duclair, and a rejuvenated Sam Bennett, among many others – the Panthers have been playing some of the best and most entertaining hockey all season.

Getting Giroux made them better. They've gone 16-4, winning a franchise-record 13 straight, and clinched the Presidents' Trophy since completing the deadline deal. And although they hit a rough patch at the end with losses to Tampa Bay, Boston and then Montreal in a meaningless finale, make no mistake, they can skate with anyone right now. This is a stacked team, one that Sunrise has been waiting a long time for.


2. Toronto Maple Leafs (54-21-7, 115 pts.): If you're looking for offensive firepower, Toronto has it in spades. Led by Auston Matthews, who just reached the 60-goal mark for the season, the Leafs are coming in hoping this is finally the year they make it past the first round after 18 seasons. They'll have to find stable goaltending fast though. Even though they've kept up in the Atlantic Division, they've dealt with inconsistent play from Jack Campbell, Petr Mrazek, and a run of AHL call-ups all season. And in the playoffs, that type of uncertainty in net almost never flies.


3. Tampa Bay Lightning (51-23-8, 110 pts.): Looking to become the first team to win the Cup in three consecutive seasons since the New York Islanders did it four straight times in the early '80s, the Lightning's title defense will go up against its stiffest competition yet. The Bolts are still as formidable as ever with a core of Victor Hedman, Nikita Kucherov, Brayden Point, and captain Steven Stamkos – who, in his 14th season, crossed the 100-point mark for the first time in his career – and one of the league's top goaltenders in Andrei Vasilevskiy.

But everyone else in the field will be gunning for them, and with two short offseasons already, you do have to wonder at what point will the grind catch up to them. They're coming in hot though, having won five of their final six regular-season games and outscoring their opponents, 34-17.

1. Boston Bruins (51-26-5, 107 pts.): The Bruins have been playoff regulars for the past six seasons and the better part of the past 15 years, but they might not be the Cup contending threat they used to be. The core of Patrice Bergeron, Brad Marchand, and David Pastrnak remains productive, and guys like Taylor Hall, Erik Haula, Charlie Coyle, and Jake DeBrusk have been solid complimentary forwards while Charlie McAvoy has taken over on the Bruins' blueline.

But Bergeron is 36 and in the final year of his contract, Marchand is 33, and longtime goalie Tuuka Rask retired after rehab from a hip injury. Can they still make some noise? Maybe. But signs point to a team in transition.


2. Washington Capitals (44-26-12, 100 pts.): Like the Bruins, the Caps have also been playoff regulars for most of the past 15 years, but since winning the Cup in 2018, they haven't advanced past the first round. They just never seemed to recapture the fire they once had. Still, the roster is talented enough to have Washington playing into May. The question is are they good enough to go any further? Alex Ovechkin, at age 36, turned in his ninth 50-goal season in his run for the all-time goals record, though that has had a dark cloud over it because of the star winger's relationship with Russian President Vladimir Putin.

Evgeny Kuznetsov has been nearly a point-per-game player as the top-line center (78 points in 79 games), Tom Wilson put up 24 goals, and John Carlson (17 goals, 54 assists) continues to anchor the Caps' defense. But the Caps get the top-seeded Panthers right away. They face a tremendous uphill battle, one where they might no longer have the drive or the talent to win.

Here's how the first-round in the East shapes up with each team's odds to win their respective series courtesy of DraftKings: