Will Colorado or Edmonton finally break through? 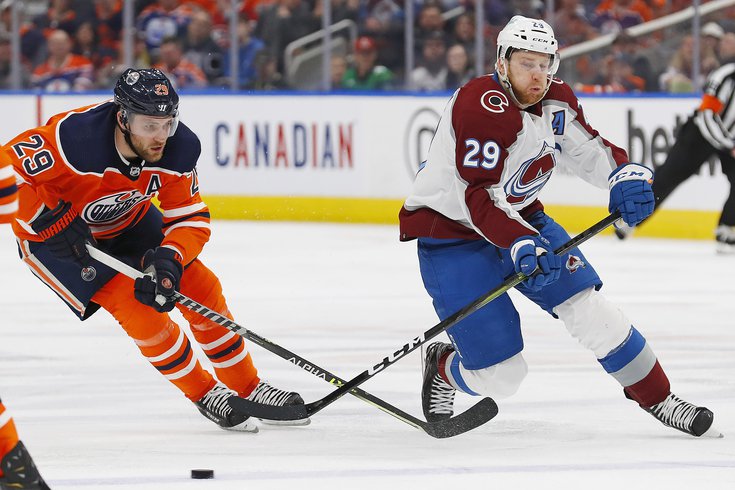 The race to the Stanley Cup is on for the Avs' Nathan MacKinnon and the Oilers' Leon Draisaitl.

The race to the Stanley Cup is on.

On Sunday we went over each of the eight teams in the East and where they stand heading into the postseason. Today, it's the Western Conference, which comes in with tons of offensive firepower, a few of the absolute best players in hockey right now, a quite literal wild card and some upstarts in silver and black.

Without further ado, here's a breakdown of the Western Conference. (See the East here.)

1. Colorado Avalanche (56-19-7, 119 pts.): A team with one of the league's premier players, but one that, for whatever reason, can't manage its way past the second round. Sound familiar? Nathan MacKinnon and the Avs want to finally break through, and they're coming in with their fiercest lineup yet. There's MacKinnon (88 points) and Mikko Rantanen (92 points) at the top, with captain Gabe Landeskog expected to return from surgery soon to join them on the left wing. Nazem Kadri has put together a career season (28 goals and 87 points), and defenseman Cale Makar (86 points) constantly has the puck moving the other way for Colorado.

After Vegas eliminated Colorado last year, MacKinnon lamented that he 'hasn't won sh**' yet. Colorado is dead set on changing that.

2. Minnesota Wild (53-22-7, 113 pts.): Any Flyers fan looking at the Wild is likely watching them to see how fast they can recover from Chuck Fletcher if he gets the boot. Minnesota spun its wheels as a one-and-done playoff team for years and looked like it was beginning to bottom out. Then Kirill Kaprizov came over from Russia. The Wild got fun, and after trading for Marc-Andre Fleury at the deadline to boost their goaltending, they mean business too.

3. St. Louis Blues (49-22-11, 109 pts.): The Blues have goals coming in from everywhere. Vladimir Tarasenko, who returned to form after a couple of years' worth of shoulder issues and a resulting trade request that went unfulfilled, leads St. Louis with 34 goals and is one of nine players who have scored 20 or more this season (Pavel Buchnevich, Jordan Kyrou, David Perron, Ivan Barbeshev, Brayden Schenn, Brandon Saad, Ryan O'Reilly, and Robert Thomas).

The Blues boast a solid defense too, between Colton Parayko, Justin Faulk, Nick Leddy, and Torey Krug. It's their goaltending that's the question though. Jordan Binnington, who was crucial to the 2019 Cup run, hasn't been at the same level since, and Ville Husso comes in with better numbers and probably more of a right to start.

1. Calgary Flames (50-21-11, 111 pts.): What a difference a year makes. After missing out on the playoffs last season, the Flames came roaring back, with Johnny Gaudreau leading the charge. The South Jersey native played himself into the Hart Trophy conversation with a 115-point campaign and is one of Calgary's three 40-goal scorers alongside Matthew Tkachuk (42) and Elias Lindholm (42). Andrew Mangiapane brings even more firepower with 35 goals of his own, and Rasmus Andersson and Noah Hanifan help provide Calgary with a reliable defensive group, while Jacob Markstrom offers solid goaltending with .922 save percentage and 2.22 goals-against average.

The Flames have impressed in the regular season only to fall flat in the playoffs before, but they're probably the most complete team coming out of Canada this postseason (sorry, Edmonton and Toronto).

2. Edmonton Oilers (49-27-6, 104 pts.): As long as Connor McDavid and Leon Draisaitl are around, the Oilers will always be a spectacle to watch. But playoff success has eluded the superstar duo, and it's always been a question of whether Edmonton can put the right cast around them to get the team over the hump.

So far, they haven't done it, and if you look past McDavid's (44 goals, 123 points) and Draisaitl's (55 goals, 110 points) production, there's a huge drop-off from the rest of the team. Zach Hyman still added 27 goals though, and the Oilers got 22 more when they added Evander Kane (though the decision to bring him in was a controversial one. As far as goaltending goes, they're hoping Mike Smith can stay steady for them.

At the very least, we have a good shot of seeing McDavid do something cool.

3. Los Angeles Kings (44-27-11, 99 pts.): The kings turned heads this season and return to the playoffs for the first time in four years, but do so as a team in transition. The old guard of Anze Kopitar, Drew Doughty, and Jonathan Quick got them to the dance. Now it's on the next core of Adrian Kempe, Quinton Byfield, Sean Durzi, and complementary players like Viktor Arvidsson and Phillip Danualt to run with it.

They're not expected to go far. Not yet, at least. Doughty is out after undergoing wrist surgery and former captain Dustin Brown announced he will retire after the playoffs. Combine that with Anaheim Ducks captain Ryan Getzlaf's recent retirement, and it's clear that an era in California hockey is coming to a close.

1. Dallas Stars (46-30-6, 98 pts.): The defending Western Conference Champions (yeah, you read that right), in a lot of ways, are the ultimate wild card. They come into the postseason with a negative goal differential (-8) but have a top line of Jason Robertson (41 goals), Roope Hintz (37 goals), and Joe Pavelski (27 goals, 54 assists) that commands teams' respect, and a defense led by Miro Heiskanen that can lock things down when they want to. But past that, you have no idea what you're going to get with this team.

Tyler Seguin and Jamie Benn aren't what they used to be, but this is still generally their era of Stars hockey, and it's one that's been defined by wild fluctuation. They'll be a playoff team one year, middling the next, then just pull a run to the Cup Final out of nowhere like they did in the bubble two years back.

2. Nashville Predators (45-30-7, 97 pts.): This team probably should've been lingering in mediocrity, but 40-plus goal performances from Matt Duchene (43) and Filip Forsberg (42), a Norris-caliber season from defenseman and captain Roman Josi (96 points), and incredible goaltending from Juuse Saros has Smashville back in the postseason. But an injury to Saros spells a devastating blow to their chances if he can't make it back in time, especially up against top-seeded Colorado.

Here are the first-round matchups for the West, with series odds courtesy of DraftKings:

And here's something to set the mood: