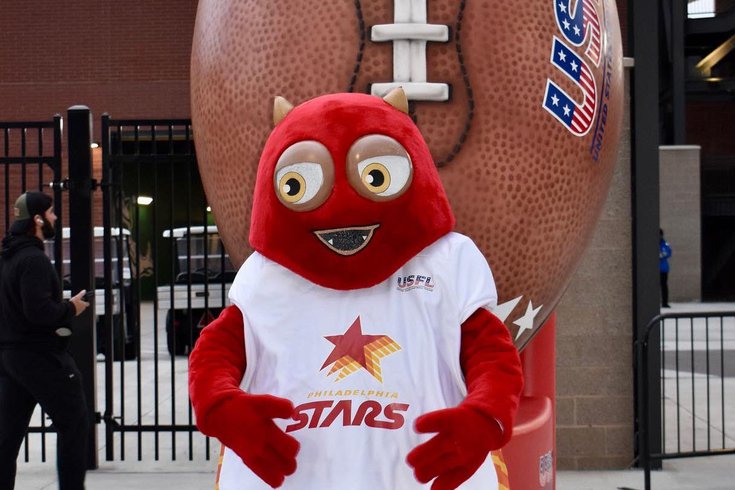 Philadelphia is a hallowed mascot city.

The Phanatic is the gold standard that all mascot should be held up against. The brief period where Phillies fans saw a fugazi Phanatic walking around Citizens Bank Park is over, as the real Phanatic is back in South Philly. Across Pattison Avenue, there's Gritty. After being torn to shreds when first revealed, Gritty has since become a phenomenon both locally and national due to the mascot's 'WTF' nature.

There is a new mascot in town, however, trying to get in on the "amorphous creature" territory. The Philadelphia Stars, who will be playing in the revival of the United States Football League that starts on Saturday, unveiled their mascot earlier in the week, prompting a naming contest that would be played out in a Twitter poll:

To the surprise of literally no one, "Blob" ran away with the voting.

On Friday morning, the Stars announced the mascot would indeed be named Blob:

Honestly... good. The hit rate for upstart sports leagues is almost zero. They need ever ounce of goodwill possible to build a brand and a fan base. Getting the weirdest mascot possible that's a somewhat-creepy, somewhat-endearing spiritual successor to both the Phanatic and Gritty, is wise. Yes, Blob (will always think of the X-Men villain instead of the Stars mascot when I hear that name) is certainly a knockoff Gritty, but leaning into the absurd in almost any facet of life is going to get a stamp of approval from me.

I have to say, however, that Blob isn't the best name for this mascot. It was very clearly 'Chunky,' a nod to the cult hit Netflix sketch comedy series "I Think You Should Leave with Tim Robinson." If the Stars really wanted to endear themselves to Weird Philly Twitter, naming the mascot 'Chunky' would've been iconic:

chunky new year. figure out what you do. you have all year to think of it pic.twitter.com/9R2fJrQIBT