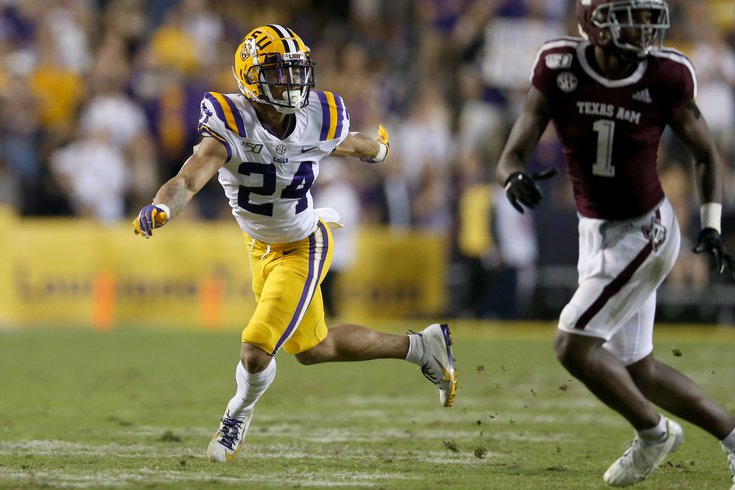 With the 2022 NFL Draft 14 days away, there are a bunch of new mock drafts out there from the heavy-hitting national guys/gals. And so, as I sit here staring blankly at my computer looking for something to write on an absolutely gorgeous day here in the greater Philadelphia region, let's just do another mock roundup and call it a day, shall we? Cool.

#JimmySays: I don't like London, and a punter that early, now matter how fun he might be, would be a silly pick, in my opinion. That aside, this would be a fantastic haul.

Pick 15: Chris Olave, WR, Ohio State: After last week's trade with the Saints, the Eagles now have one fewer first-round pick, but you have to think they'll take a receiver with one of them, right? If they're committed to using 2022 as an evaluation year for Jalen Hurts, they should give him the tools to succeed. Olave had seven touchdowns out of the slot last season, but he can move outside, too, and use his 4.39 40 speed to get open. Hurts would love throwing to him and DeVonta Smith, with Dallas Goedert working the middle of the field.

Pick 18: Nakobe Dean, LB, Georgia: I see a massive void in the middle of the Eagles' front seven, and we're getting to the point in this draft in which an off-ball linebacker will be taken. I have Devin Lloyd just ahead of Dean in my rankings, but there are teams that will fall in love with Dean's intangibles. He's a tremendous teammate who was the leader of the national champs' historic defense. He's a little undersized, but he can play sideline to sideline.

#JimmySays: I think it's interesting that Kiper says, "The Eagles now have one fewer first-round pick, but you have to think they'll take a receiver with one of them, right?"

That's probably right, as long as the Eagles stick and pick. I believe they'll explore opportunities to trade up either for a defensive end or perhaps one of the top two corners (Sauce Gardner or Derek Stingley) in this draft. But if they just stay at 15 and 18, there will be a good wide receiver prospect available. Let's call a WR in Round 1 something of their "safety school" scenario.

Pick 15: Trent McDuffie, CB, Washington: Philadelphia has an obvious void at one cornerback spot, and McDuffie gives the Eagles one of the stickiest, toughest man corners in the draft.

Pick 18: Treylon Burks, WR, Arkansas: Jalen Hurts needs another weapon on offense, and Burks is one of the most well-rounded in the draft, combining size (6-3, 225), athletic ability, play strength and run-after-the-catch capability.

#JimmySays: McDuffie is a good player, but I believe that the dropoff from Gardner and Stingley to him is substantial. If you're going to invest in a cornerback in the first round, spend the third-round pick to go up higher in the draft and go get one of the top two guys. If the cost is too high and McDuffie is the best player on the board when you're on the clock, trade out. If McDuffie is who the Eagles ultimately end up with, particularly at pick 15, that would be a pretty big disappointment.

Pick 15: Jordan Davis, DT, Georgia: Philly’s Fletcher Cox is only 31, but he’s had two — by his standards — subpar seasons since being one of the best in the league.

Pick 18: Trent McDuffie, CB, Washington: The Eagles haven’t drafted a first-round cornerback since 2002. The Eagles were 22nd in DVOA defending No. 1 receivers last season, which was the worst in the NFC East. After the 18th pick, Philly won’t draft again until 51st, at which point the top eight CBs are almost certainly going to be gone.

#JimmySays: It still blows my mind that the Eagles gave Fletch $14 million.

I'm curious who these supposed consensus "top eight CBs" are.

Pick 15: Derek Stingley, CB, LSU: Stingley falls to the Eagles who add one of the draft's premier talents to their secondary.

Pick 18: Daxton Hill, CB/S, Michigan: Another defensive back for Philadelphia with the nickel corner/safety hybrid with high-end upside due to his athletic gifts.

#JimmySays: I almost feel like Stingley can't possibly fall to 15, because I think the Eagles would trade up for him by the time that would ever happen.

The idea of Hill is growing on me, but I just can't see it this high in the draft. There will be better players available.

And then, what the hell... I did a simulated mock at TheDraftNetwork.