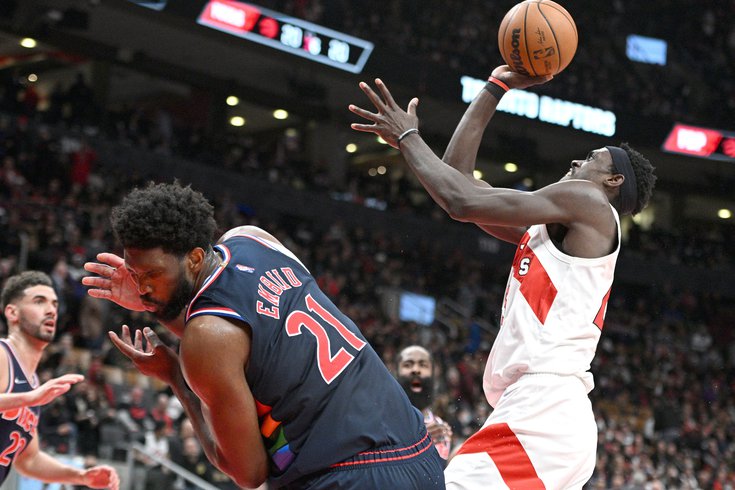 Joel Embiid is out indefinitely after taking this hit from Pascal Siakam.

Sixers center Joel Embiid suffered a right orbital fracture and a mild concussion in Thursday night's win over the Toronto Raptors, and the Sixers have ruled him out for the time being, with updates to be provided, "as necessary" moving forward.

Embiid appeared to suffer the injury late in the fourth quarter of Philadelphia's blowout win over Toronto, when Pascal Siakam hit Embiid with an elbow to the face with just under four minutes to play in the game, the Sixers up by 29 points at the time when Siakam made contact:

(It has no bearing on the injury, obviously, but this play was initially ruled a foul on Embiid on the first go-around, only overturned to a foul on Siakam after Doc Rivers challenged the ruling on the floor.)

Embiid suffered a very similar injury back in 2018, when a collision with then-teammate Markelle Fultz resulted in a left orbital fracture for Embiid. The big man would miss the final eight games of the regular season in addition to the first two games of the 2018 playoffs after undergoing surgery to address the problem, making his return for Game 3 in Miami on April 19th, 22 days after colliding with Fultz on the floor and 19 days after the successful procedure to address the issue.

There's been no indication that surgery will be required at this time, which leaves the door open for Embiid potentially playing at some point during the Sixers-Heat series, though it's premature to speculate on timing based on a number of factors, including how long the Sixers' series might last against Miami with Embiid out in the short-term. Following surgery in 2018, Embiid famously returned to play wearing a customized mask, even donning a Phantom of the Opera costume as the bell ringer for the Sixers' first game of the playoffs. Embiid recieved further evaluation in Philadelphia on Friday night after returning from Toronto.

To put it lightly, this is a massive blow for the Sixers in a series where Embiid's play may have been even more instrumental to their success than it was against Toronto. The Heat present a stiffer, more experienced test in round two than the Raptors did in round one, better organized on almost all levels. Embiid's ability to orchestrate the defense on the back end and deal with Miami's pressure on the offensive end was expected to be a key to the series, and now the big question is whether he can/will play at all.

On that subject — Embiid will be the hardest person to convince on this, but it's not unreasonable to suggest at this point that it may be time to cut your losses and live to fight another day. No one has been less fortunate with injuries impacting him in the playoffs than Embiid over the last five years, and proving he is capable of playing and delivering through pain and ailments has been central to his rise to MVP candidate. Expecting him to be an impactful basketball player with a torn thumb ligament in his dominant hand and a fractured face, though, seems more than a bit unreasonable. There are two separate questions Embiid, the medical staff, and a group of decision makers will have to answer. Is bringing Embiid back a responsible decision, and will bringing Embiid back in this state offer enough upside to even justify whatever risk is assumed putting him on the floor?

With or without Embiid on the floor, the guy who gets put into the spotlight here is James Harden, the star Daryl Morey was after for months in Ben Simmons trade talks and the guy who was expected to be Embiid's co-star in a potential run (and hopefully, multiple runs) for a title. The concept of this Philadelphia team is built around the idea of each guy drawing attention/doubles with the ball in their hands, providing space and scoring opportunities for the other at basically all times. Now that Embiid has been ruled out, at least for now, Harden's ability to win individual matchups and organize the offense from the perimeter becomes the primary driver of potential Sixers success. Needless to say, that's slightly worrying, though Harden did have an excellent Game 6 in Toronto and a quietly great Game 3 against the Raptors to set up Embiid's second-half heroics.

There's no denying that things have just gotten a lot easier for the Heat, who can now feel comfortable throwing more pressure and bodies toward Philadelphia's perimeter players, comforted by the knowledge that Embiid is not there to punish them while in rotation. What Rivers decides to do with his big man rotation is something of a mystery until we talk to him this weekend. The safe money is on Rivers going with a two-man combination of DeAndre Jordan and Paul Reed, given that they're the only guys who have gotten regular minutes behind Embiid lately, but don't be shocked if this is a time for some experimentation in a crappy situation, the Sixers either attempting to go small or perhaps even leaning on an unknown entity like Charles Bassey in a pinch.

One bit of ediorializing, since I saw this pop up in the moments after the news broke — sure, you can be upset about Embiid being in the game at all with the Sixers running riot and the series all but over with four minutes to play. But that feels like misguided anger, given how on edge everyone is and was about Philadelphia preserving leads on a micro and macro level. If Siakam had been called for any of a few dozen elbows directed at Sixers players throughout the series, perhaps he would not have been throwing them around in the dying moments of his team's final game.