Five things we learned from our first Megaformer workout

Owner and instructor Stephanie Tolar does a leg exercise using one of her studio's Megaformer workout machines.

In April, Philadelphia was graced with its first Megaformer studio -- a long time coming, considering the machine-based fitness trend first started in California in 2001.

Sculpt Fitness was opened by Stephanie Tolar at the Piazza in Northern Liberties and houses 10 Megaformer machines. Tolar told PhillyVoice she first came upon the Megaformer at a studio in Brooklyn, where she watched from afar with skepticism ("Pft, this looks easy!"), only to be won over after trying it for herself and basking in the next-day soreness that followed.

When she realized Philadelphia lagged behind both New York and Washington, D.C., with the trend, she felt it was a no-brainer to bring the fitness method here. In the short time her studio's been open, she said she's experienced a strong reception -- strong enough to now begin scouting a second location in Center City she hopes to open in 2016.

In a nutshell, the allure of the Megaformer comes from its promise to offer a full-body workout in 50 minutes. Created by French bodybuilder Sebastian Legree, it's designed to be ideal for both strength trainers and anyone who merely wants to tone. It's also designed to not overwork the joints or spine, instead focusing on slow-twitch muscle fibers with concentrated motions.

As Tolar puts it, it's a workout where, unlike with a CrossFit workout, "your muscles will give out before your lungs do."

Intrigued, and as skeptical as Tolar during her Brooklyn experience, we took the machine for a test run. Below, five things to know heading into your own Megaformer workout.

1) It looks like a torture device, but it's not (seriously) 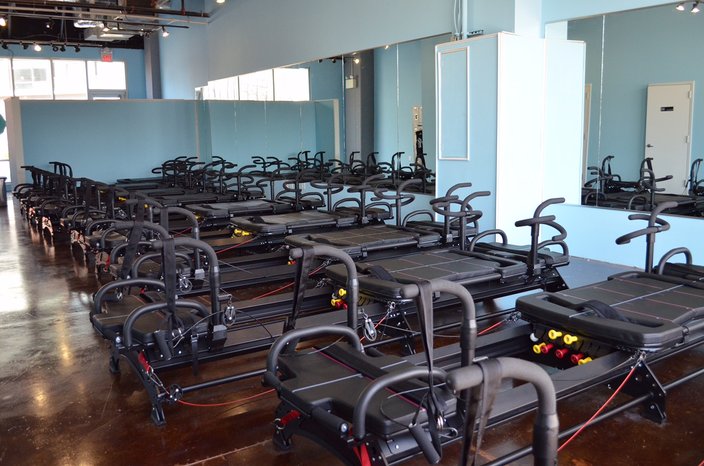 The point being, these same features that make the machine look terrifying from a distance are also what make it so user-friendly in practice. Rest assured these additions aren't meant to be intimidating -- to the contrary, they're comforting additions mid-workout, when you're about to lose your balance and might need, say, that extra pair of front handlebars to avoid a face-plant. They're also handy for toning down the difficulty of an exercise you'd otherwise give up on, akin to dropping to your knees for a push-up.

Whatever you do, don't refer to the Megaformer as a Pilates machine.

"People associate it with Pilates because of the Proformer, which is based off Pilates," explained Tolar. "But we’re at a point where it's five generations later and the method is so different, the machine is so much bigger and there’s so much more to do. We’re really just in a class by ourselves."

In truth, though, the workout does feel like Pilates -- but on steroids. Where it sets itself apart is with the size of the machine -- at 10 feet in length, a gift for anyone who's tall -- and the array of exercises able to be executed as a result. The handlebars-and-carriage combo also come into play, making a plank, for example, easier to execute in a form-perfect fashion while managing to be more of a challenge. Your body, meanwhile, is focused on not just tightening abdominals and keeping steady on the bars, but in working in overdrive with supporting muscles to prevent sliding backward with the on-tracks carriage. At times, it feels like surfing.

It's also a satisfying tool for stretching, allowing for a full, resistance-based leg extension with plenty of room to spare on the machine. 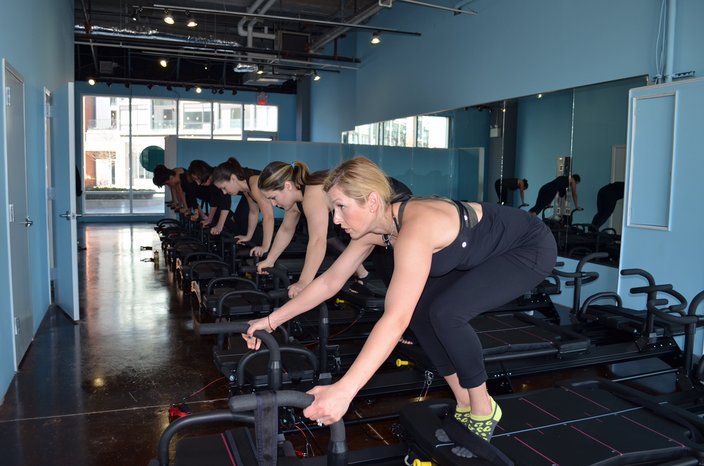 At a glance, the Megaformer could easily be confused for a 2015 version of the Total Gym machine. (Only, of course, you won't be bringing this 250-pound behemoth into your basement anytime soon.)

The reality is the Megaformer is a sort of hybrid of Total Gym and Pilates, taking from the best of both. Like with a standard Pilates machine, you'll find resistance cables that make it ideal for strength-building (let's be honest: Total Gym's incline- and body-weight-based gimmick only gets you so far), and as with Total Gym, you'll experience a fuller range of motion and a genuinely challenging pull-up, courtesy of the handlebars. Think of it as a more intuitive Total Gym, capable of working just about any muscle group and with more seamless transitions between exercises, considering there's no fumbling with attachments.

4) It's like a really, really strenuous game of Twister

Prepare to work muscles that don't often get worked at the gym -- especially your legs, which you'll find criss-crossing each other as they would in a game of Twister -- only extra stressed from the constant balancing act that comes with working out on a moving carriage.

To boot, instructions are easier to follow than in the standard workout class because the carriage is marked with lines and numbers that indicate foot placement. So, anyone who typically steers clear of classes out of the sheer confusion that tends to come with the experience, don't be shy.

5) Not for: Beginners, or anyone too fearful of slip-and-falls

All of the above in mind, the Megaformer is probably not a good option for anyone who still bends at the knee for a squat or can't hold a plank for more than a few seconds.

"We definitely recommend having just a little bit of a fitness background," Tolar admitted. "If you’re new to working out, this is probably not the best place to start."

It's also not going to increase heart rate in the way a treadmill would, so if that's the goal, look elsewhere. The Megaformer, in short, could be aptly described as a marriage of strength training and cardio, with emphasis on the former.

And if you're at a larger weight and not typically comfortable on a Pilates machine, you likely won't be comfortable on a Megaformer, either. While true that its larger size makes it more accommodating and, in some ways, forgiving, it's also not hard to imagine the weak or clumsy among us collapsing off the carriage, particularly during a leg or standing exercise. As with any fitness method, participate at your own risk.

All the same, here's the advice: Try a class to understand it for yourself. Unlike other workout methods, you won't be able to test drive the method in your living room -- it's uniquely experiential.

You can catch a free intro course with Tolar every Wednesday of September at 6 p.m. in her studio.