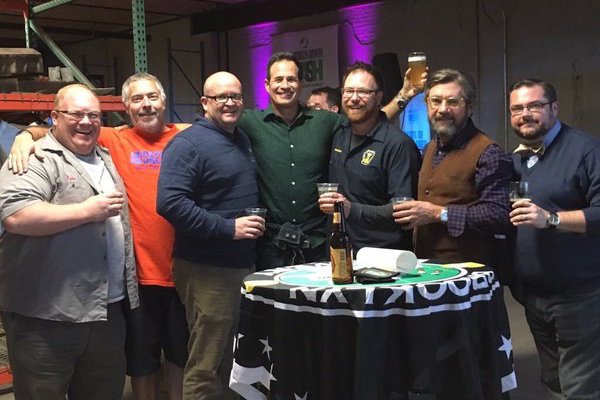 Philadelphia is, irrefutably, a city that loves its beer. It's partly why Brooklyn Brewery has hosted one of its "State of Craft Beer" panels here for the past two years, this year as part of its third annual eight-city Brooklyn Mash Tour.

Below, catch seven takeaways from the night, including whether the beer bubble will burst and how Philadelphia is like "Rome for beer."

1) IPA is the new pilsner

On the heels of Heineken's recent 50 percent stake in popular IPA brewer Lagunitas, a craft brewery that increased barrel production of its beer by 50 percent last year, the question at hand was this: Might IPA be the new pilsner? (That is, the most common of beers.)

"IPA is the dominant style," Covaleski said of craft brews, noting that a diversity of brewers in the industry will keep IPAs from taking over completely.

Hindy, meanwhile, was careful to warn beer drinkers not to choose brews by style alone. One IPA could end up blurring into the next as breweries compete to be the style's go-to brand.

Burris chimed in to say that her company felt obligated to make an IPA because of demand from local bar buyers. She fears the outcome of a culture that lumps beers together by style at a time when so many unique beers -- like her company's Koffee Kolsch, she said -- are just as good, or better.

But, she acknowledged, IPAs are having a moment -- even if she thinks consumers will all "return to a solid pilsner" eventually.

2) It's all about the local tie-in

People care more than ever about where their beer came from.

"I talk to bar buyers and they tell me, ‘Yeah, I’m trying to keep my list more local these days and keep it to the East Coast -- the mid-Atlantic," Patton told PhillyVoice. "That’s really new. Five years ago, if you wanted a great craft beer bar you were getting West Coast beer, Belgian beer and you were trying local one-offs, but you weren’t necessarily emphasizing the local guys."

Covaleski, meanwhile, noted that it will become increasingly important to educate the public that brands like Shock Top and Blue Moon, though selling with a craft beer image, aren't the independently owned companies they think they are. (Shock Top is owned by Anheuser-Busch InBev and Blue Moon is a MillerCoors product.)

Calagione advised craft consumers to take matters into their own hands.

"[Consumers can go to] retail stores and say, 'This is bull****,'" he said. "A zillion of the same company’s beer that’s not a craft brewery but is in the craft brewery section ... You can’t chat with distributors, but you can chat with retailers.”

3) There's uneasiness over big guys gobbling up the little guys

The beer industry has hardly been an exception within the economy's ongoing market consolidation. Last week, Anheuser-Busch InBev acquired SABMiller -- its closest competitor -- for $104 billion. Looking out 10 years from now, said Calagione, one of his biggest concerns is that big-leaguers will continue to buy craft breweries tempted to take a buyout.

“In the big global picture, you have a lot of people cashing in on breweries, and you can see that's true as people are getting older in this industry and are looking -- they don’t’ have an exit strategy, and that’s the only exit strategy they have," Kehoe told PhillyVoice before Thursday's event.

"And that’s great; I don’t blame them for that. But, you know, that's not what we stand for. We stand for the little guy and not selling out to the big guy."

4) Philadelphia is primed for more brewpubs

When Saint Benjamin's Brewing Company opened in May 2014, it was the first microbrewery to open in city limits in years, Patton told PhillyVoice. And with recent Pennsylvania law changes that make the concept of city brewpubs more enticing in general, he foresees more of them opening in city limits, just as brewpubs like Tired Hands Brew Cafe have continued to sprout in the suburbs.

He, too, plans to open a brewpub in the next year, he told PhillyVoice.

"People want their local brewpub -- they want their local craft brewery, and people want all these artisanal things and like them better being made locally," he said. "That's why some breweries will be moving into Philadelphia or have satellite locations around Philadelphia, I expect, in the next two years.”

“And I bet some breweries that are further out in the 'burbs are going to take advantage of the law in a way that will allow them to have a taproom in Philly," he added.

An obvious hurdle for the craft industry is over-saturating the market. Could it happen? Maybe. Is it obvious that it will? Not exactly.

Covaleski added during the panel that preventing a bubble burst will depend on how well brewers cultivate a community that supports new beer drinkers.

Burris, meanwhile, argued that the quality of beer is what will ultimately matter most.

“I think there’s room for plenty more breweries as long as they’re making quality beer and doing the legwork it takes to get it out there," she said. "I think there will be a crunch – I wouldn’t say a 'bubble burst,’ but there may be some places that fall to the wayside, people who don’t nail down quality. And unfortunately ... it takes a lot of money, a lot of capital [to open a brewery today].”

Patton: If you go to Portland or Seattle, it’s hops. Go to Montreal, and it’s interpretations of Belgian styles. But I think the nice thing is, [Philadelphia is] sort of 'Rome for beer.'

For the most part, Calagione agreed, but he was slightly less optimistic about there not being a bubble burst down the line.

"It is entering a more competitive moment, and it’s probably true to say that our country can’t sustain two new commercial breweries opening every day for an infinite amount of time," Calagione told PhillyVoice.

"I do think in two or three years there will be a correction, but the breweries that survive, it won’t have to do with scale but three prongs of what defines a successful brewery regardless of scale: obsessions with quality, consistency and being well-differentiated. Whether small or going bigger like we did, if they do those things, they’ll thrive.”

6) Philadelphia finds strength in not having a go-to beer

Sure, Yuengling immediately comes to mind, but more as Pennsylvania's beer, not necessarily Philadelphia's.

While Calagione cites pilsner as being Philadelphia's staple beer style, and Kehoe (naturally) cites his pale ale as the city's potential signature beer, Patton is happy that Philadelphia doesn't yet have a beer that springs to mind in the national public consciousness.

"If you go to Portland or Seattle, it’s hops. Go to Montreal, and it’s interpretations of Belgian styles. But I think the nice thing is, we’re sort of 'Rome for beer,'" Patton told PhillyVoice. "All beer ends up here -- breweries try everything. That’s why [Saint Benjamin has] 10 different beers, from straightforward English beers to a lavender saison to white barley wine.

"You don’t have to brew a certain thing in Philadelphia or fight that perception of what the city can do. I think that is a huge asset to letting people experiment."

7) The state of craft beer is strong

And not only is craft brewing in general on the up and up, but so is Philadelphia's scene -- one that, in the same vein as many industries in the city, is best known for its sense of community.

“It is becoming increasingly rare to have a local beer scene that is as altruistic and mutually supportive compared to Philly," Calagione told PhillyVoice after high-fiving a fellow brewer. "The hugs we’re all having right now, we grew up in the industry together but all have great respect for the new breweries coming in as well."

"It’s a unique scene," he said, beer in hand, "and, you know, [elsewhere] I heard it’s pretty cutthroat.”