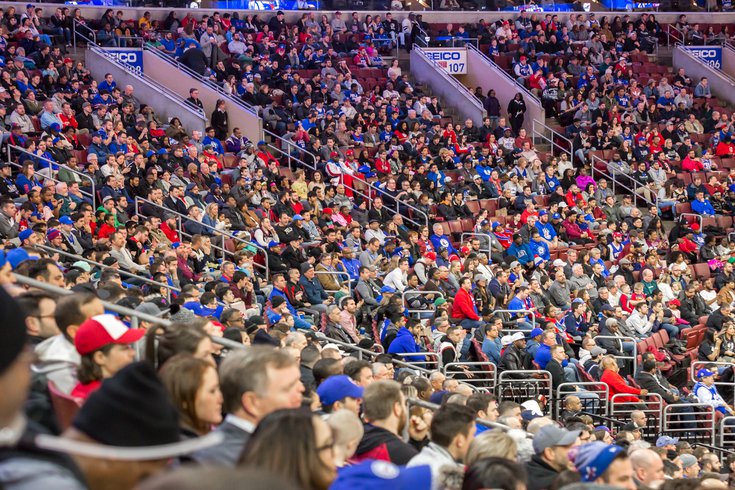 Fans at a Philadelphia 76ers game.

After this weekend’s action, the 76ers boast the best record in the Eastern Conference, three games ahead of the Brooklyn Nets and 3.5 clear of the Milwaukee Bucks. Nobody else is closer than nine games (the New York Knicks currently occupy the fourth seed in the East, nine games south of Philadelphia).

If the 76ers win at least two of their last four games, they will clinch the conference’s No. 1 seed even if Brooklyn or Milwaukee goes undefeated the rest of the way. In other words, things are looking quite spectacular for the Sixers when it comes to securing home-court advantage throughout the Eastern Conference playoffs, which in turn could make them a rather enticing NBA pick.

Although the top seed obviously doesn’t guarantee automatic passage into the NBA Finals, its importance cannot be overstated — especially not this season. Consider the benefits of the 76ers locking it up.

First they would avoid both the Nets and Bucks in the second round of the postseason. While the Sixers would run into either the Knicks, Hawks, Celtics, or Heat, the Nets and Bucks would go head-to-head in a blockbuster early-round battle. It’s true that New York, Atlanta, Boston, or Miami would be no pushover, but the 76ers would be heavily favored in any of those matchups and they would be more than happy to sit back and watch a Brooklyn-Milwaukee series.

Second, Philadelphia would also benefit from home-court advantage in a potential Eastern Conference Finals showdown against either Brooklyn or Milwaukee. How big of a boost would that be? Well, the Sixers have the best home record in the Eastern Conference at 25-7. They are a far more modest 20-14 on the road. Meanwhile, the Nets are 25-8 at home compared to a disappointing 18-16 on the road. The story is similar enough for the Bucks, who are 23-10 at home and 19-14 on the road. It’s pretty obvious that Philly will be best served hosting either one of those two East powerhouses as many times as possible at the Wells Fargo Center while avoiding travel to the Barclays Center (Brooklyn) and the Fiserv Forum (Milwaukee).

Beyond their likelihood for the top seed and home-court advantage, the 76ers are well-equipped for playoff success. Although Joel Embiid may not be the one of the NBA best bets to be MVP — because of Denver Nuggets center Nikola Jokic — Embiid is without question one of the best players in the league. The same can be said of Ben Simmons, albeit with his prowess especially coming on the defensive end of the floor. In the current era of the NBA, outside shooting is paramount and the Embiid-Simmons duo is complimented nicely by an array of sharpshooters on Philly’s roster. Tobias Harris, Danny Green, and Seth Curry are all shooting better than 40 percent from three-point range. Finally, Philadelphia is led by a veteran head coach in Doc Rivers. This will be Rivers’ 17th trip to the playoffs as a head coach and he captured the 2008 NBA title with Boston.

Given that the Nets feature a “Big 3” with Kevin Durant, Kyrie Irving, and James Harden, it may be understandable that they lead the NBA Eastern Conference championship odds at -112. It is clear, however, that these 76ers (+440) cannot be discounted.