A not quite Bonnie and Clyde trio hit West Deptford bank 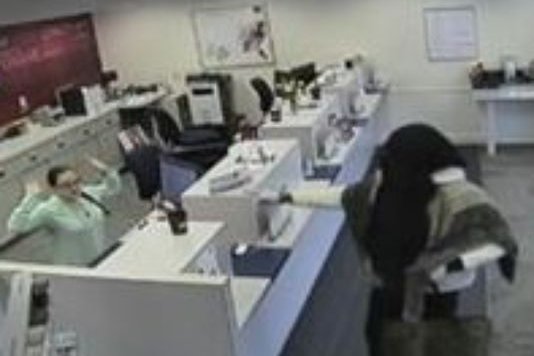 Police are looking for a trio of West Deptford bank robbers. One man wore a black dress. Another nan carried a purse, and the woman carried a long silver-plated revolver.

Apparently we need to rethink that whole Bonnie and Clyde thing when it comes to today's bank robbers.

A West Deptford BB&T bank was stuck up by three people – a woman and two men – shortly after 11 a.m. Wednesday.

One man wore a black dress.

Another man carried a pocketbook.

And the woman toted a long silver-plated revolver.

One man is described as black, muscular, standing between 6 feet 2 inches and six feet four inches. He was wearing a black dress, a black facial cover, and a gray sweatshirt, according to police. He had a gun.

The other man, who carried a purse, was described as black and 6 feet tall with a thin build, in his early 20s. He also wore a black face cover. He also carried a handgun.

The woman is described as black, 5 feet 5 inches tall, and in her late 20s to early 30s. She wore a dark face covering and carried a gold yellow handbag.

Police said her weapon was a long silver revolver, with a wood handle.

The trio entered the bank, located at Kings Highway and Parkville Road, on Wednesday morning.

They ordered the employees into a room where the bank vault was located and took an undisclosed amount of cash.

The robbers fled on Kings Highway in a champagne-colored 2006 Chevy Equinox.

The Deptford police – and maybe even the fashion cops – are on the lookout, and have released a surveillance image in the hopes that the public can identify the suspects. Anyone with any information should contact the West Deptford Police Department at 856-845-2300.