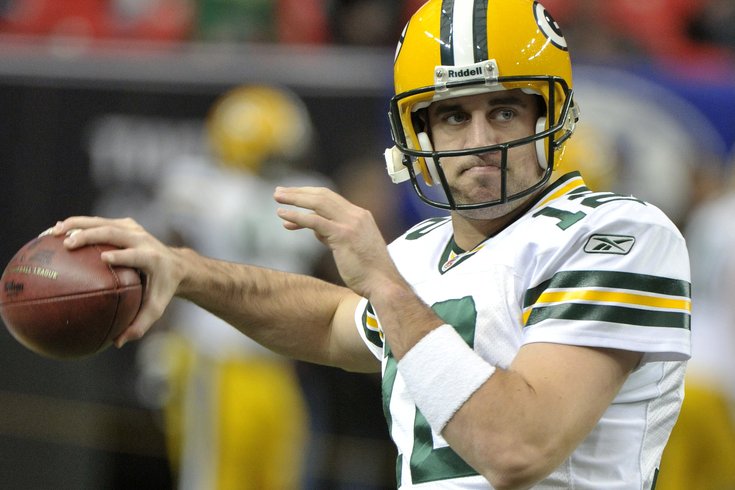 Packers quarterback Aaron Rodgers during warmup prior to a November game against the Falcons in Atlanta.

The perennial shock of alleged UFO sightings, rarely met with much tangible evidence, was substantially dulled in January when the CIA released a trove of so-called "X-Files" in response to years of backlogged FOIA Requests. They and all the paranormalists of the world may want to touch base with Packers quarterback Aaron Rodgers, who swears he saw a UFO fleet across the New Jersey sky in the months leading up to the 2005 NFL Draft.

Appearing earlier this week on Pete Holmes' "You Made it Weird" podcast, the Super Bowl XLV MVP explained that something strange happened one snowy February night while crashing at the rural home of a former Cal teammate.

"Late at night, I was with a good friend," Rodgers said. "Multiple eyewitnesses saw the same thing."

Around midnight, after an 8-course Italian family dinner, Rodgers describes hearing a loud siren outside and running with his friend to check out the commotion. The whole experience was reminiscent of 'Independence Day,' he says.

"It looks like commercial jets kinda flying – or maybe it's a military jet – and they're trying to figure out what's coming through the clouds and you see like a fiery movement of cloud, I guess, coming through the sky. Then the plane eventually runs into the spaceship, which is coming into orbit. It was like ... a large, orange, left-to-right moving object."

Rodgers says the UFO mysteriously vanished from sight and then produced about four loud sounds usually heard from fighter jets.

"In typical fashion," Rodgers says, "there was no mention of it the next day."

The quarterback notes that a nearby nuclear plant and frequent air traffic in the vicinity – common themes in UFO sightings – could be behind the episode. But eleven years later, he'd still like "UFOlogists" to look into it, if possible.

Last July, a Philadelphia man filmed what appeared to be a cloud-like UFO drifting electrically through the summer sky, but nothing ever came of that. No jets. No nuclear reactors. For anyone convinced they've seen a UFO, Aaron Rodgers' experience should comfort you in the belief that there's something out there.