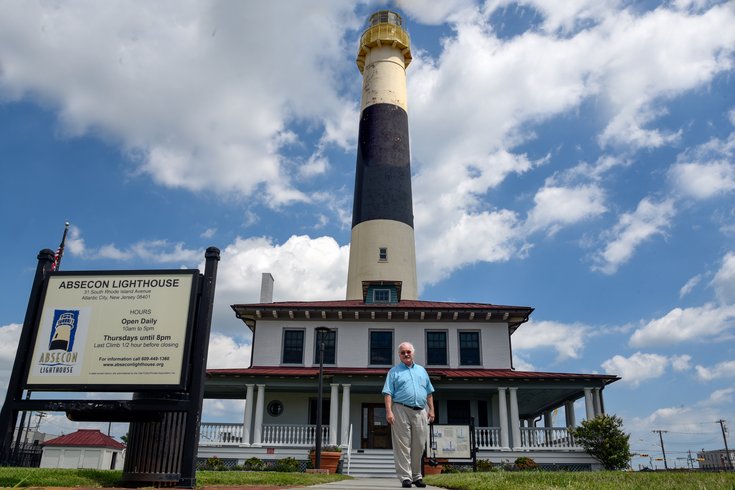 Good publicity for Atlantic City can be an uphill battle, especially on the nearly empty, sad-end-of-the-boardwalk – otherwise known as the Inlet.

For Daniel Heneghan, uphill in this instance means an up the stairs – 228 of them.

On Sept. 15, sometime in the late afternoon, Heneghan will climb Absecon Lighthouse’s steps for the 100th time this year.

What began as a spur-of-the-moment lark in 2013, has become an ongoing endeavor for Heneghan. He first climbed the 171 feet to the top of the Absecon Lighthouse four years ago as part of a birthday celebration for the structure known as Abby. 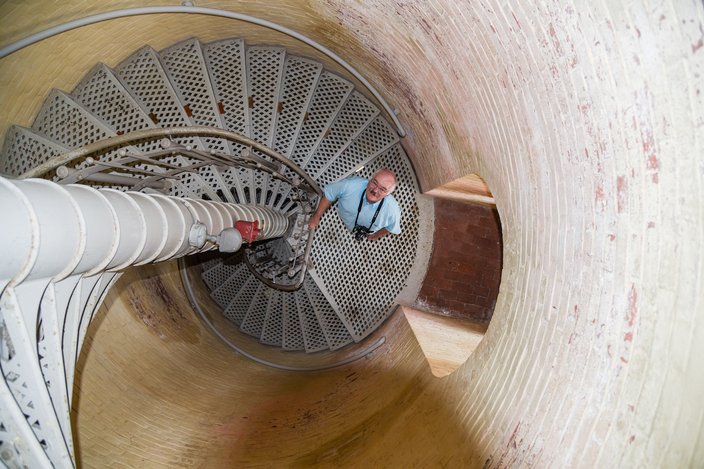 Daniel Heneghan, of Ventnor, climbs the 228 steps to the top of the Absecon Lighthouse located in Atlantic City, New Jersey.

“I had cake,” he explained, and that treat made the former journalist from Ventnor, who now is a spokesman for New Jersey’s Casino Control Commission, feel just guilty enough to walk off the extra calories. The first climb left Heneghan a tad sore.

“Climbing was the furthest from my mind,” he said Friday as he set off on his 93rd climb of the 2016 season.

But that day in 2013 he’d donated $50 to the non-profit that runs and preserves the lighthouse – which bought him an annual membership – and all the free climbs he could manage.

And thus was born his avocation, which also includes traveling to lighthouses elsewhere while on vacations.

Heneghan's climbs have raised awareness, as well as money, for Abby, which has a direct link to Philadelphia via its designer, George Meade. 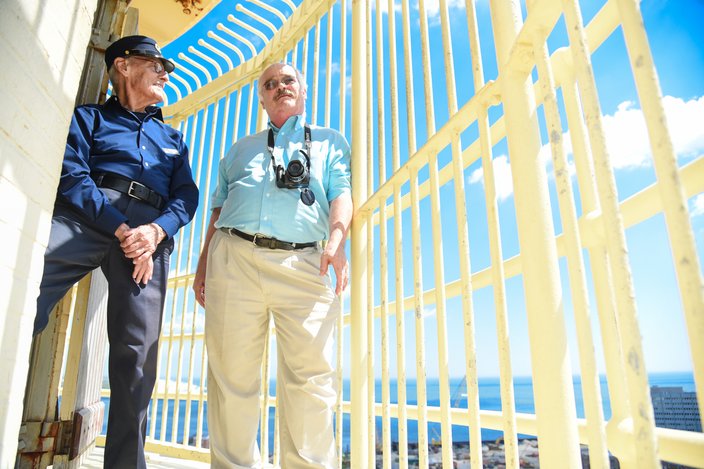 Volunteer lightkeeper Buddy Grover, of Atlantic City, and Daniel Heneghan, of Ventnor, take in the view at the top of the Absecon Lighthouse in Atlantic City, New Jersey.

Heneghan set a personal goal of 50 climbs that first year, with a pledge of $1 for each ascension. His youngest son said he’d double the donation if his dad could make 60 climbs.

That year he instead logged 77 climbs and he raised about $1,600 for Abby.

Like Heneghan, volunteer lightkeeper Buddy Grover showed up one day as part of the Lighthouse Challenge and ended up staying, greeting visitors.

Abby can stand the love and support.

The double cylinder – there are two sets of walls – is built with 598,634 bricks and contains a fantastic spiral staircase.

A set of 12 tiny steps lead to the lens, which is fashioned from heavy leaded-glass made in Paris in 1854.

While it was assembled piece-by-piece on site, hauled up the side by block-and-tackle, the finished beacon weighs in at more than 12,000 pounds. 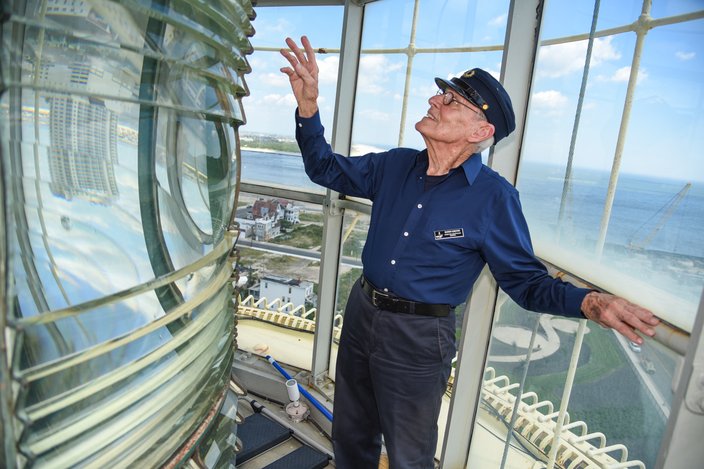 Appropriations for the lighthouse were first made in 1854 and the work was completed by 1857, when the lens fired up for the first time.

The light could be seen 19.5 nautical miles out to sea.

Meade, the lighthouse's designer from Philadelphia, was a civil engineer and Union general who commanded the nation’s forces at the Battle of Gettysburg in 1863, whipping Gen. Robert E. Lee and his troops in the fight that became the turning point in the Civil War.

Meade, a member of what later was the Army Corps of Engineers, oversaw construction of Absecon Lighthouse before going off to fight in the Civil War.

Abby is the third tallest masonry lighthouse in the country. Meade also is responsible for the construction of lighthouses in Cape May Point and on Long Beach Island.

The son of a Philadelphia merchant, Meade returned to his hometown after the war, where he lived at 1836 Delancey Place in Center City. His public service continued, serving as Fairmount Park commissioner until his death in 1866. 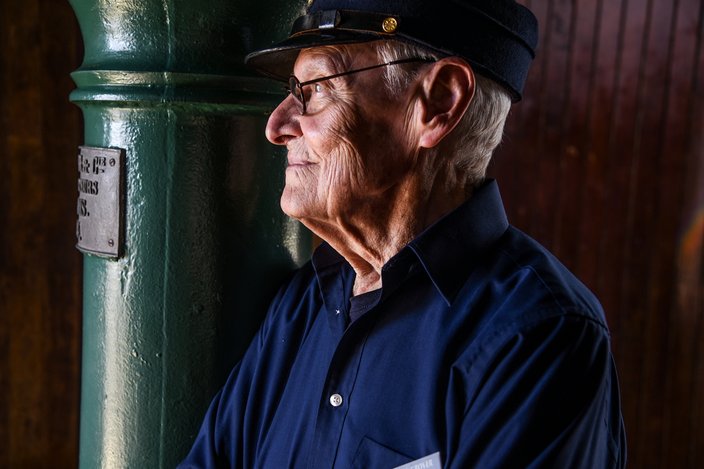 Lightkeeper Buddy Grover, of Atlantic City, waits to greet visitors as they reach the top of the Absecon Lighthouse.

The Absecon Lighthouse was decommissioned in 1933 and then suffered from decades of neglect. For a time, the Atlantic City Police Department’s Vice Squad officers perched in the town with binoculars to watch Atlantic City's adjacent, surveilling drug trafficking once prevalent in the neighborhood.

But the lighthouse has become a major tourist attraction in recent years, pulling in 20,000 visitors a annually, according to Milton Glenn of the lighthouse association.

Glenn’s not certain what the plans are, but he’s certain there will be a celebration on the day Heneghan completes his 100th climb.

But since it burns 160 calories, he’s fairly sure there will be cake.