Accused murderer posed on Twitter with a large-caliber handgun

Police: Not same weapon used in non-fatal shooting or murder of Camden teen 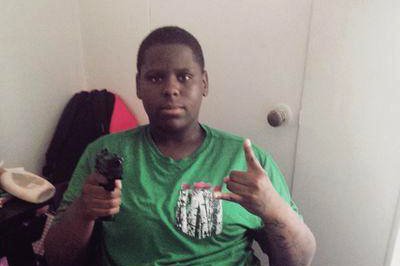 Casche Alford, 17, who has confessed to a non-fatal shooting last October in Camden, was arraigned Friday in adult court, charged with shooting a 13-year-old Camden boy to death in January. In this picture from her Twitter account, she is holding a large-caliber semi-automatic handgun.

The 17-year-old Camden girl charged as an adult Friday in the slaying of a 13-year-old Camden boy used a profile picture of herself holding a large-caliber semi-automatic handgun on her Twitter account.

But the gun Casche Alford held in the Twitter picture is a larger caliber weapon than the .38 caliber weapon she used in a non-fatal shooting last October — she has confessed to that shooting — and then allegedly used again to gun down Nate Plummer Jr. in January.

Authorities have said the same weapon was used in both crimes.

But a police source said the weapon in the picture — the Twitter account appears to have been created in 2015 and has had no recent activity — appears to be a .40 caliber or slightly smaller 9 millimeter handgun – if it is a real weapon.

A spokesman for the Camden County Prosecutor’s Office did not immediately respond when asked if additional handguns were recovered when Alford turned herself in earlier this year.

That means yet another illegal handgun may be on the streets of Camden.

In adult court Friday, Alford was arraigned for allegedly murdering Plummer. She was waived up Thursday from the juvenile court system.

Despite all of that, a not guilty plea was entered by her lawyer. Unable to post bond of $1 million, Alford is held in the Camden County jail.