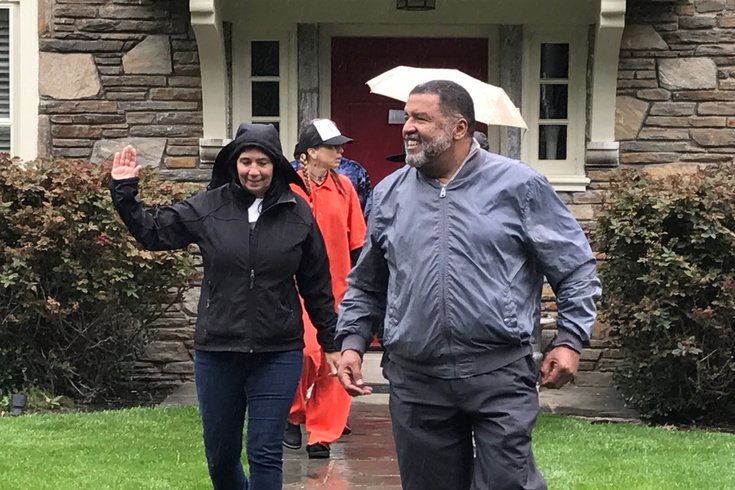 Activists, along with Cheri Honkala, walk away from a house in Bryn Mawr after knocking on the door to request 'community reparations' for poor, homeless and indigenous people.

A group of activists knocked on doors Saturday afternoon on the Main Line, asking residents to consider redistributing large portions of their wealth to poor, homeless and indigenous people.

Their efforts are part of a national tour dubbed "The Stolen Land/Hoarded Resources tour" in which poor people walk through rich neighborhoods and ask residents to redistribute wealth or begin a dialogue on the concept of so-called community reparations.

Organizer Lisa "Tiny" Gray-Garcia, a native Philadelphian who was homeless as a child, led a group of about 20 activists into Bryn Mawr, where they spent more than an hour knocking on doors.

Gray-Garcia, co-founder of POOR Magazine, said their efforts were not intended as an attack against the rich. Rather, she said the group came peacefully and with love, hoping to start conversations about wealth redistribution.

"We're bringing the education and the medicine, if you will, of redistribution," Gray-Garcia said. "We're asking folks if they do have a second or third home, (or) stocks and bonds that they don't need to live, to consider actually redistributing that wealth to poor people."

The concept of community reparations is that all people are connected as humans and therefore should take care of one another, Gray-Garcia said.

They also asked residents to donate to the Sogorea Te Land Trust, an indigenous, women-led organization dedicated to facilitating the return of Chochenyo and Karkin Ohlone lands.

The group stopped at homes located along Winsford, Fisher and Pembroke roads, passing out fliers that explained their cause.

"It was very hard for us," Gray-Garcia said. "This is extremely hard for folks who struggle with oppression, hate and classism to do. This is making us physically sick."

In some cases, residents answered the door and briefly engaged in conversation. One woman pledged to take a closer look at the information the group provided her and consider a contribution.

Other times, no one answered the door. In a few cases, a child or housekeeper accepted the flier.

The group walked calmly throughout the neighborhood, with a couple members recording their actions and interactions on mobile phones.

As Gray-Garcia approached the first few houses, she sang "Give us back our stolen land," into a megaphone. Yet, the device provided little amplification and the group otherwise made little noise as they went from house to house.

The police showed up about 30 minutes into their walk, following up on a resident complaining about a disturbance. The police simply instructed the activists to remain on the sidewalk and only send a few people up to the doors at one time.

"You had liberals, obviously, who smiled in your face and then called the cops on you afterward," Gray-Garcia said. "You had a situation where people actually felt criminalized by having their land be named stolen and took umbrage. ... and felt threatened by our mere presence."

But, overall, Gray-Garcia said she thought the walk was successful, saying she was inspired by the people who came out. At the end, the activists collected $700 among themselves to help a pair of people with housing needs.

Honkala, who recently lost a state House race in North Philly but is fighting the results, addressed the group before it began knocking on doors. A longtime anti-poverty activist, Honkala said she was taught the importance of sharing her resources from a very early age.

"We all have a responsibility to being to take care of ourselves and our brothers and sisters," Honkala said. "That's what I'm dedicated to doing today."

Gray-Garcia said the tour is loosely based on the Bhoodan Movement, in which Vinoba Bhave walked through India asking wealthy landowners to give land to people without it.

The tour previously made stops in Park Avenue in Manhattan and in the Hamptons, as well as neighborhoods in California. Often times, Gray-Garcia said, people chose not to engage the group.

"In Beverly Hills, people pretended to be their own gardener to avoid us," Gray-Garcia said. "It was really weird. ... In Venice Beach, it was their vacation home — they just weren't even there."

The group selected Bryn Mawr for a stop because it is a wealthy neighborhood located only a few miles from poor neighborhoods in North and West Philly, where many people are living homeless or in extreme poverty.

"We tour our neighborhoods all the time and know how dire our straits are," Gray-Garcia said. "The folks who have collected more than they need never get looked at. We're going here with love. This is not an attack. It's not a protest. This is a walk."

The group includes activists from POOR Magazine, the Poor People's Economic Human Rights Campaign, Picture the Homeless, Showing Up for Radical Justice, and the Resource Generation.