Environmentalists project their displeasure with Toomey on side of building 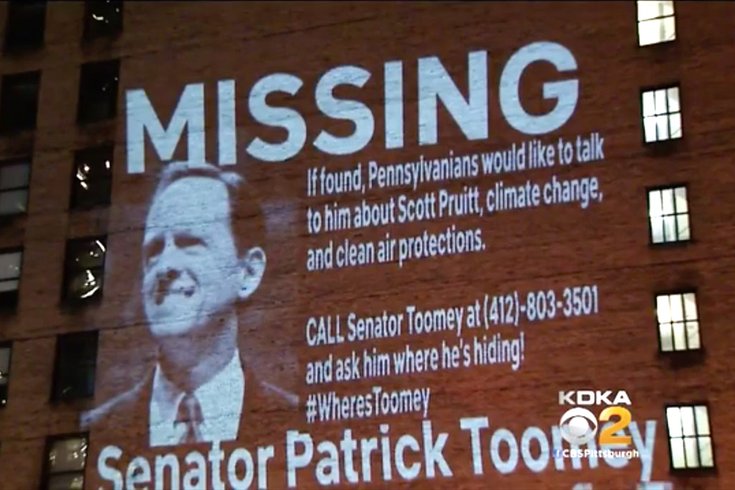 The Sierra Club Pennsylvania projected a missing poster of Sen. Pat Toomey onto a building Thursday night in Pittsburgh in this image from KDKA-TV.

The club, a solid foe of President Donald Trump, lit up the side of a building with a giant "missing person" flyer with Toomey's image. To project their displeasure with the senator.

"If found, Pennsylvanians would like to talk to him about Scott Pruitt, climate change, and clean air projections," the flyer said. "CALL Senator Toomey at (412)-803-3501 and ask him where he's hiding!"

The environmental action group has taken Toomey to task for voting with his fellow Republican senators to confirm Scott Pruit to lead the Environmental Protection Agency.

After Trump indicated he would nominate Pruitt for the DEA, the Sierra Club put out a statement.

“Having Scott Pruitt in charge of the U.S. Environmental Protection Agency is like putting an arsonist in charge of fighting fires," the club said. "He is a climate science denier who, as Attorney General for the state of Oklahoma, regularly conspired with the fossil fuel industry to attack EPA protections."

Much like they have done in Philadelphia, protesters in Pittsburgh have held "Tuesdays With Toomey" rallies at the senator's Station Square office. In recent weeks, they have joined constituents across the state in calling for Toomey to meet them face-to-face in a town hall.

On Thursday, organizers of the Pittsburgh weekly protest were invited to meet with Toomey in private at the Federal Court House, KDKA-TV reported.

After the meeting, Toomey issued the following statement:

“I recently reached out to the leaders of Pittsburgh’s “Tuesdays with Toomey” group for the purposes of a meeting this afternoon. This is the second meeting of this nature I have hosted this week, with the other coming in Harrisburg on Tuesday.

“The conversation, while serious in nature, was civil and provided me with the opportunity to listen to their concerns regarding federal policy and other important issues. Topics of discussion included, but were not limited to, LGBTQ rights, health care, hydraulic fracturing, and nation security.

“While our policy perspectives differ on some of these issues, I found the meeting to be constructive. I thank the leaders of Pittsburgh’s “Tuesdays with Toomey” group for both their time and candor and look forward to additional meetings of this nature across Pennsylvania soon.”