The Lehigh Valley staple is going out of business 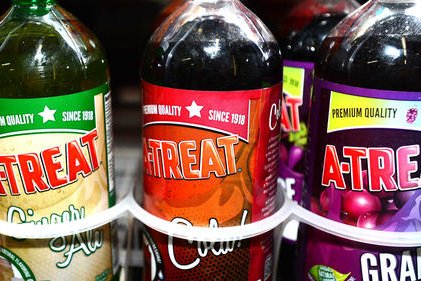 In news that will surely bring a tear to the eyes of anyone from the Lehigh Valley, A-Treat soda will soon be no more.

WFMZ reports that Redner's Warehouse Markets received a notice Friday afternoon that the soda company has ceased operations and will no longer make deliveries.

A-Treat's sodas have been a Lehigh Valley tradition for nearly 100 years. The company has been based in Allentown since its beginning. Per A-Treat's website:

In 1918 A-Treat was started three generations ago in a three-car garage in downtown Allentown (PA) by Joseph and Jack Egizio. The business moved to its present location in east Allentown in 1932 where it has produced delicious A-Treat sodas for near and distant customers for the past 75 years.

The Morning Call reports the closure had been rumored following recent struggles the company experienced such as health and safety fines and the stoppage of deliveries to major retailer Wal-Mart. As the article notes, the company may have been doomed by the changing times:

"They said they were fine," LVEDC CEO and President Don Cunningham recalled.

Even so, Cunningham said he's not entirely surprised to hear A-Treat is closed. Soda sales have been in decline for a decade, he noted. Today, consumers are more apt to drink flavored water, flavored teas and sports drinks. Big soda companies such as Coca-Cola have helped to maintain profits by diversifying into those products.

The news has sparked a variety of reactions, most of which revolve around stocking up on the variety of A-Treat flavors. One woman purchased over 30 bottles of soda after hearing of the closure, while others are either mourning the loss or making similar plans:

already told my dad to run (don't walk) & buy all the birch beers he can find. #PAproblems http://t.co/7rB0h3cjYX

This snow is annoying, but I will not let it deter me from my goal for today which is to locate and purchase a box of A-Treat cream soda.

A-treat soda just announced they were shutting down, hold on while I cry my eyes out💔 there goes my favorite soda

A-treat's closing :( Noooooo where am I supposed to get my cream soda and birch beer???

I don't drink a lot of soda, but I think I'm gonna need to stock up on A-Treat. 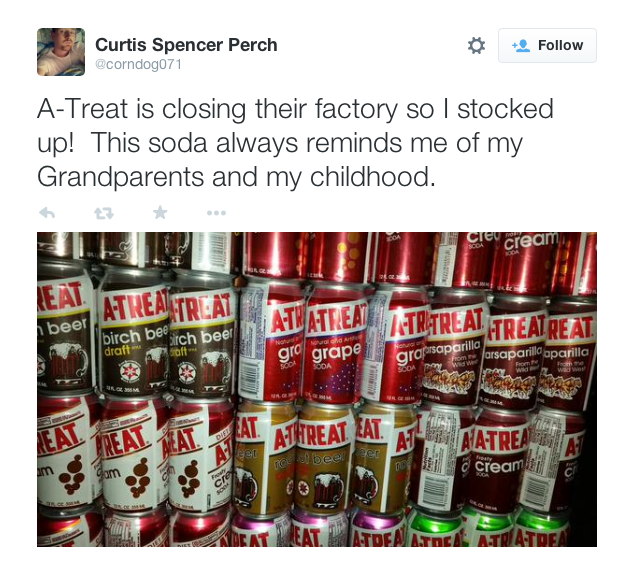