A.J. Brown: 'I get to play with my best friend' in Jalen Hurts 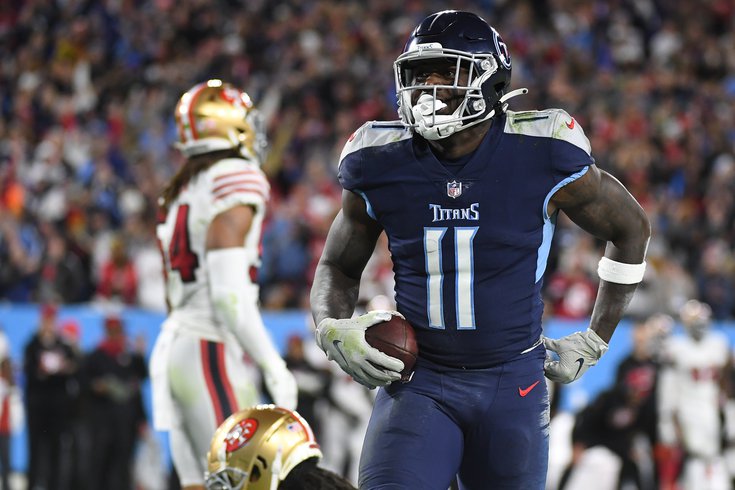 The vibes are great for the Eagles right now. It was as successful of a draft as fans could've hoped for, landing a young Pro Bowl wide receiver in A.J. Brown plus two of the best defenders in college football in Jordan Davis and Nakobe Dean. For a fan base that can dwell in their own self-created agony, it's more than reasonable to be happy about the Birds at the moment.

Know who else is happy about this team? Brown, who know finds himself as the top skill position player on the Eagles following a Thursday night draft trade. Howie Roseman deserves all the credit in the world for orchestrating this move. Roseman is attempting to right the wrongs of past Eagles eras where quarterbacks like Randall Cunningham, Donovan McNabb and Carson Wentz were given subpar weapons to work with. That won't be the case with Jalen Hurts in 2022.

Besides the optimism that comes with hoping the third-year QB blossoms with Brown, DeVonta Smith and Dallas Goedert surrounding him, there's a pre-existing friendship with Brown and Hurts that should help to quickly build their rapport.

"I get to play with my best friend and [it's] just great to be a part of this great organization," Brown said to NBC Sports Philadelphia report John Clark when the two spoke at the Philadelphia International Airport (naturally).

"Man, it’s going to be real special, man." Brown continued. "I’m so excited, playing with someone who thinks like me. I talk to him every day regardless of this football stuff. I’m so excited just to play with him. He’s a quarterback and I’m a receiver so we get on the same page quick."

"Regular" people typically only get to play football with their best friend in the DVYAA rough touch football league or a Turkey Bowl Thanksgiving morning meet-up. It's as special as Brown indicates.

Given the way some players in the past have failed to click with their Eagles teammates (not naming names!), it's refreshing to see Hurts connecting with other Eagles like this. It's obviously all for naught if it doesn't translate to on-the-field production, but the talent around Hurts currently puts him in the best-possible scenario to succeed in 2022.