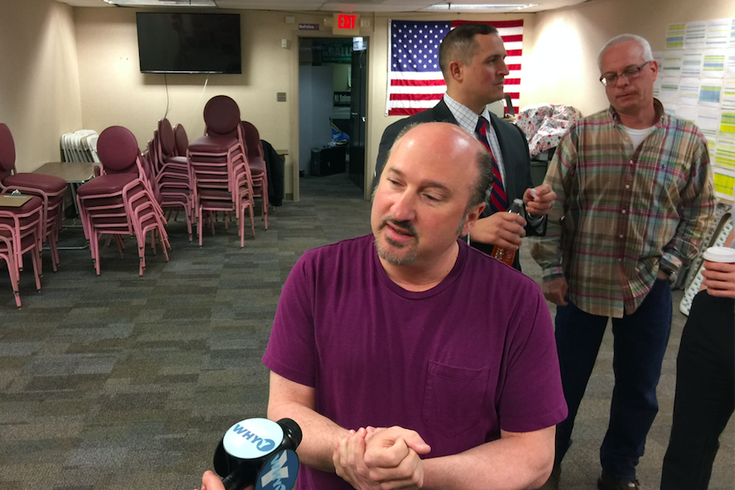 Gary Grisafi, a poll watcher in the 42nd Ward during the 197th District special election, discusses shady dealings he saw at polling places on March 21, 2017.

Standing before a line of news cameras and microphones on Thursday morning, the state Republican Party’s chairman didn’t claim his candidate should have won last week’s 197th District special election.

What Val DiGiorgio and other state and city party officials did say, however, was that they would file a federal lawsuit on Friday or Monday in an effort to overturn the result amid “the rampant fraud” detailed in an onslaught of polling-place corruption complaints.

The complaints of election malfeasance in the statehouse race, handily won by Democratic write-in candidate Emilio Vasquez over Republican Lucinda Little and Cheri Honkala of the Green Party, are “just the latest in a generation-long series of blatant violations of election law,” said DiGiorgio, chairman of the state Republican party.

DiGiorgio cited voter intimidation, ballot tampering and voters being told how to vote – some even had their privacy allegedly violated by election officials who entered voting booths – during a press conference at the city GOP’s headquarters on Cottman Avenue in Northeast Philadelphia.

“Our polling places must be sacred. The right to privacy in those polling booths must also be held sacred, and our election-board workers must be neutral,” he said. “Let me be clear: I’m not arguing that the Republican would have won but for these violations.

“What I am here to do is put law enforcement and the media on notice that what is happening in Philadelphia polling places needs to stop. We need free, fair and honest elections, and the voters in Pennsylvania demand this. This intimidation … has to stop.”

He was “on the ground” in the district with a poll-watcher certificate available only to Republicans since Little was the lone candidate on the ballot.

“In an election like this, they were willing to go to such lengths to cheat? Imagine what happens when it’s a close election.” – Joe DeFelice, city GOP chairman

“A lot of people who were in those polling places should not have been there,” he said, describing one scene where workers outside were telling voters they needed a stamp to vote in the “special election” and walking inside with them to help them vote.

DeFelice said his party has aired complaints about elections throughout the years, but the March 21 special election stood to draw more attention as the lone race in Philadelphia that day.

He’s even testified in Harrisburg about it, but said his claims were brushed off as “partisan.”

“Like Chairman DiGiorgio said, we realize this was an uphill battle in a five-percent Republican district,” he said. “In an election like this, that really shouldn’t have made a difference, they were willing to go to such lengths to cheat? Imagine what happens when it’s a close election.” 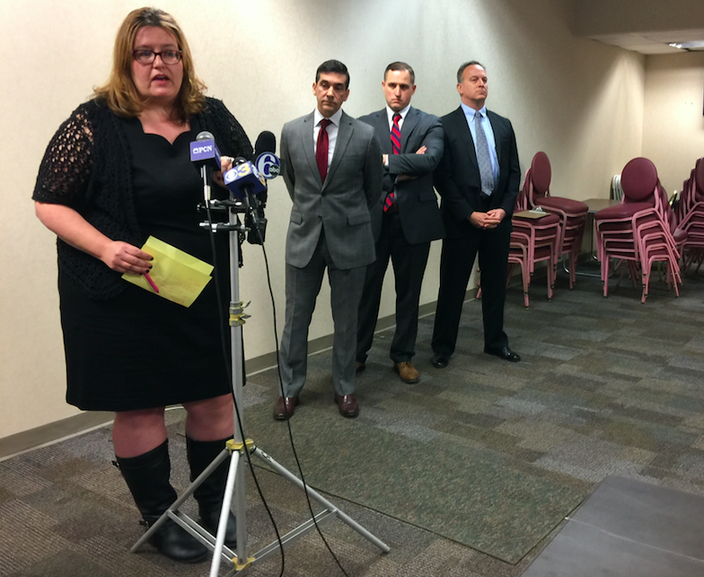 Linda Kerns, attorney for the Republican City Committee, talks about a lawsuit that will be filed shortly regarding election-day violations in the 197th District. Standing behind her is PA GOP Chairman Val DiGiorgio, Philadelphia GOP Chairman Joe DeFelice and PA GOP General Counsel Joel Frank.

In announcing the upcoming lawsuit, Joel Frank and Linda Kerns – attorneys for the state and city GOP committees, respectively – noted that Honkala’s lawyer would join them in the effort.

“We’re hopeful that once the judge in the federal court system hears and evaluates the evidence, we’ll be able to set aside the results of the 197th and have fair, accurate election results,” Frank said.

They also argued that city Democrats should be aghast about the accusations and join them in believing that, in Kerns’ words, “this is the last time it’s going to happen.”

Between photos, video and eyewitness accounts, they believe they have “concrete evidence of wrongdoing” to vacate the election. Their worst-case result is that the accusations “are brought to the attention of everybody” in the city.

Gary Grisafi, a poll watcher in the 42nd Ward, said he witnessed a judge of elections stop a voter to explain “we’re doing a write-in election” before going outside to get a voting stamp for him.

“I said a couple things and the judge was, like, ‘This is our area,'” Grisafi explained.

"They know they didn’t have a shot at (winning) this (election)." – Emilio Vasquez

After the press conference, DeFelice told PhillyVoice that he’s been talking about election violations like this for more than a decade, but “people said I was crazy.” He hopes reforms along the lines of statewide poll watchers result from this case in a traditional Democratic stronghold.

“More people are upset about the soda tax than corruption, but corruption will cost them a lot more money in the long run,” he said. “Philadelphia Republicans are used to having this happen. If we’re going to lose, we just want to lose fairly. They don’t have to cheat to do it.”

Honkala, a longtime city activist who ran a write-in campaign as a Green Party candidate, has also cried foul. The Philadelphia District Attorney’s office has since launched an investigation and asked the public to let them know about election-related wrongdoing.

When contacted Thursday afternoon, Vasquez maintained that his victory was legitimate. He conceded that while there may have been some rules bent by poll workers – he didn’t know because he didn’t see it – his opponents have nobody to blame but themselves for the loss.

“It’s not my fault,” he said. “If Republicans really wanted the seat, they have 2,200 registered in the district. Why didn’t they target them to get their votes out? They know they didn’t have a shot at this.”