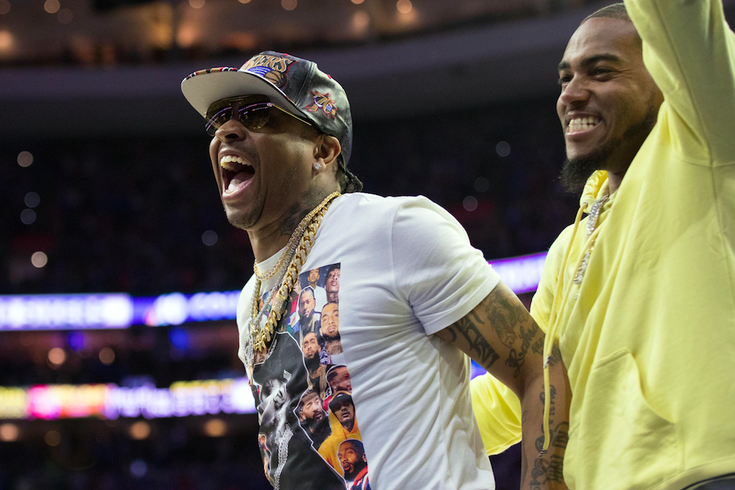 Allen Iverson and Philadelphia Eagles wide receiver DeSean Jackson cheered on the Sixers during the NBA Playoffs. While Raptors went on to win a championship, Iverson said he was pulling for the Golden State Warriors to continue their dynasty.

The Toronto Raptors celebrated Canada's first NBA championship with a well-deserved parade on Monday, but former Philadelphia 76ers legend Allen Iverson has his mind on the hobbled Golden State Warriors.

In the wake of last week's clinching Game 6 — the last game to be played at Oakland's Oracle Arena — Iverson took to Instagram to show appreciation for the juggernaut the Warriors have been.

True Warriors! I would have LOVED to have y’all in the foxhole with me any day! I’m a proud fan... God Bless & can’t wait to see y’all on the dance floor again! #Courage #HonorAndLoyalty @klaythompson @easymoneysniper

Golden State's key free agents, Kevin Durant and Klay Thompson, are slated to miss all or most of next season with a ruptured Achilles and a torn ACL, respectively. Those injuries are expected to have ramifications that trickle down through the rest of the NBA as free agency gets underway in July.

Iverson has been an admirer of the Warriors for a while, telling star guard Stephen Curry that he ranks in Iverson's "top 5" greatest players in NBA history.

In Philadelphia, Iverson has been a mainstay in the Sixers organization and a big supporter of young stars Joel Embiid and Ben Simmons, as well as pending free agent Jimmy Butler.

As much as it's a breath of fresh air not to automatically pencil the Warriors into the Finals from the Western Conference, Iverson is right to point out that they've been a team worth honoring. Their brand of dominance, if it disappears, will be missed.