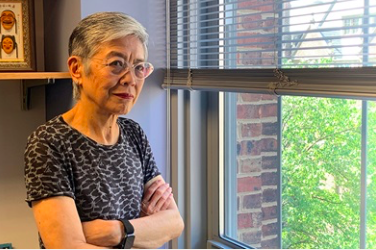 Virginia M.Y. Lee, a professor at the University of Pennsylvania, was selected as a $3 million Breakthrough Prize winner in the life sciences for discovery of disease proteins that appear in Alzheimer's and other neurodegenerative disorders.

A pioneering researcher at the University of Pennsylvania will receive a $3 million Breakthrough Prize in Life Sciences for her groundbreaking work on neurodegenerative diseases.

Virginia M.Y. Lee, a professor in Penn's Department of Pathology and Laboratory Medicine and director of the Center for Neurodegenerative Disease Research, was specifically selected for her discovery of various proteins that transmit between cells in Alzheimer's disease.

Lee's research revealed the pathological inclusions of disease proteins such as tau, alpha-synuclein and TDP-43 that accumulate in the brain in neurodegenerative conditions such as Alzheimer's, Parkinson’s disease, frontotemporal lobar degeneration, amyotrophic lateral sclerosis and related disorders.

The "tau hypothesis" Lee proposed in 1991 offered an explanation of the "misfolded" proteins in the brain that tangle and inhibit the proper firing of neurons.

"By working to replicate the pathological evolution of tau proteins, Lee invented a protein roadmap to neurodegenerative disorders and an elucidation of common mechanisms of degeneration," the Breakthrough Prize selection committee wrote. "Her research has opened up new avenues for identifying targets for drug discovery."

Now in its eighth year, the Breakthrough Prize offers $3 million to the world's top scientists in the areas of life sciences, fundamental physics and mathematics. Lee is one of four researchers to receive the prize in the life sciences category.

The prizes, considered the most generous in science, are sponsored by Sergey Brin, Priscilla Chan and Mark Zuckerberg, Ma Huateng, Yuri and Julia Milner, and Anne Wojcicki. Selections are made by previous laureates in each respective category.