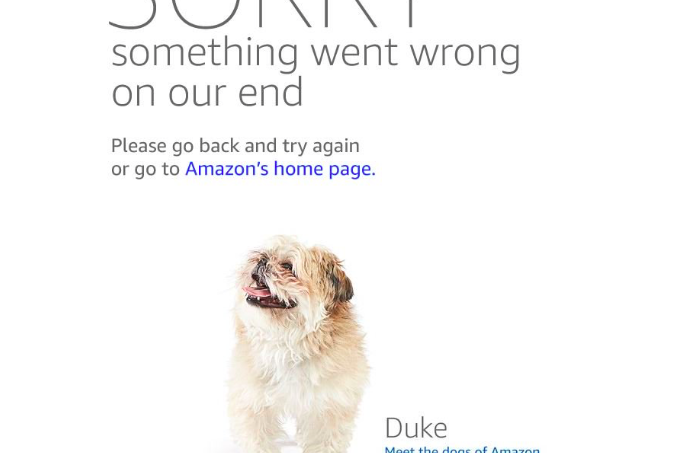 At 3 p.m. eastern time on Monday, Amazon Prime members had their devices at the ready to snag the best deals the online retailer had to offer. Instead of deals, they got dogs.

That's because Amazon's website crashed shortly after 3 p.m, when reports of issues with the site skyrocketed on DownDetector.com. Users on the desktop and mobile sites received error messages displaying various dog breeds.

So @amazon this is what has happened for the past 20 minutes when I try to browse your #PrimeDay2018 deals... pic.twitter.com/KxgeXPGAOc

amazon is crashing on prime day but at least there are dogs pic.twitter.com/jEwVlwPyLG

Why are "down" and "dogs" some of the top words in social conversation about #PrimeDay? @Amazon's site crashed and the error page has cute dogs pic.twitter.com/uje8qRs1ap

Ha!! 4 mins in and Amazon has crashed... but they have pretty cute dogs #PrimeDay pic.twitter.com/8eUMcZDiGN

Some discount shoppers decided to make light of the situation by building on the whole dog theme.

Amazon’s website crashed, but at least the error page has a different dog each time it loads! 🐶 #PrimeDay pic.twitter.com/fOmUu6w0Gi

@amazon #PrimeDay. Going to the dogs? I have a sweet one that would like to be featured. @jenmomof_4 @kwilson95 @brosef_hayden @abigalewilsonn pic.twitter.com/mMlEjnRG8N

#Amazon This is Woodstock - he was a foster dog we decided we couldn’t live without. #primedayfail #utahrocks pic.twitter.com/k1zlG9LRDb

@amazon I would like to submit my dog to be featured on your website during #primeday #primedayfail #AmazonPrimeDay pic.twitter.com/0lksuCjgqa

Hey @amazon here is a picture of my #ChocolateLab so you can at least shuffle new dog pics while you fix your website and app 😉 #AmazonPrimeDay pic.twitter.com/ftbYO5QCFJ

So @amazon doesn’t own cute dogs. (Also, Americans are so easily distracted. Our website crashed. But look, a cute dog!) pic.twitter.com/8mEfrM1136

Have you met the "pissed off that Amazon isn't working" dog? pic.twitter.com/wVfeHrRihW

Am I the only one that had a dog doing this show up on while trying to buy from Amazon?#PrimeDay pic.twitter.com/oeeIh83UVz

Others weren't so willing to let Amazon off the hook with the distraction of dogs pictures, taking the opportunity to point out that some of the company's European employees are in the midst of a labor struggle.

Don't buy anything from Amazon for #AmazonPrimeDay.

Respect the picket line. Don't be a scab. https://t.co/2bQUKs9VVA

#amazonprimeday has official started. Remember to boycott in #solidarity of the #AmazonStrike

Waiting patiently for #Amazon's website to be fixed. #AmazonPrimeDay pic.twitter.com/dQYvhXGFHU

Amazon decided to structure this year's Prime Day with a series of "lightning deals," or limited time offers that alternate throughout the course of the day. Given the way things started on Monday afternoon, shoppers may be in better position to strike when the issues are fully resolved. Until then, paying Prime members probably have Amazon in their dog house.