Anton Probst, above, used a hammer and axe to kill Christopher Deering, his wife and four children, as well as a family friend and employee, in 1866, in what is now South Philadelphia. A new book looks for links between the murderer and Frankenstein.

An upcoming book seeks to find the links between the fable of Frankenstein and a brutal Philadelphia mass murder that occurred nearly 50 years after the release of the famous novel.

In "The Face of a Monster: America’s Frankenstein," Delaware author Patricia Earnest Suter revisits the gruesome killings of eight people at the hands of Anton Probst in 1866.

A German immigrant, Probst came to the United States in 1863 and became a "bounty jumper" during the Civil War, joining up with Union regiments and collecting his check before deserting and doing the same with another troop.

After squandering away his money, he took a job for the Deering family as a farm hand in rural Philadelphia. To enrich himself, he killed Christopher Deering, his wife, four of their children, a family friend and another employee, slicing their throats and crushing their skulls before ransacking the house and hiding the bodies in hay.

Probst had the unmoved demeanor of a cold-hearted killer, but not the intelligence of one. A New York Times report about his execution details how detectives found him not far away in what's now considered Old City, drinking and selling away the family's possessions.

His trial was quick, and after initially only admitting to one killing, he opted to confess entirely when he was found guilty by a jury. Probst detailed how he slaughtered each person with a hammer and axe, and was reportedly "quiet, undemonstrative, cool and unembarrassed" at his hanging. 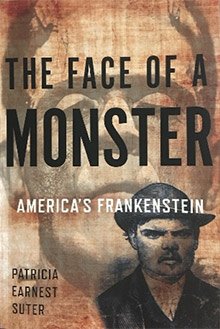 The cover for 'The Face of a Monster: America’s Frankenstein,' an upcoming book that revisits Anton Probst's brutal Philadelphia murders.

In her coming examination of Probst's murders, Suter hopes to have created an "imaginative blend of fiction and reality" by showing the parallels between Probst's ruthless crime and the monster in Mary Shelley's 1818 novel, "Frankenstein," just in time for the legendary book's 200th anniversary.

"(Shelley's) monster personified abandonment and loneliness, feelings Shelley shared. In despair, the creature resorts to violence and the novel darkens into tragedy," a preview for the book reads.

For "The Face of a Monster," Suter, who's written previously about notorious true crime in the area, sourced "Frankenstein" and accounts from Shelley's inner circle as well as modern accounts of Probst from journalists and lawyers.

"This is a story of life imitating art," the preview reads. "Over the course of researching and writing 'The Face of a Monster: America’s Frankenstein' Suter discovered that monsters exist and that her childhood belief was right: they almost always adopt human form."