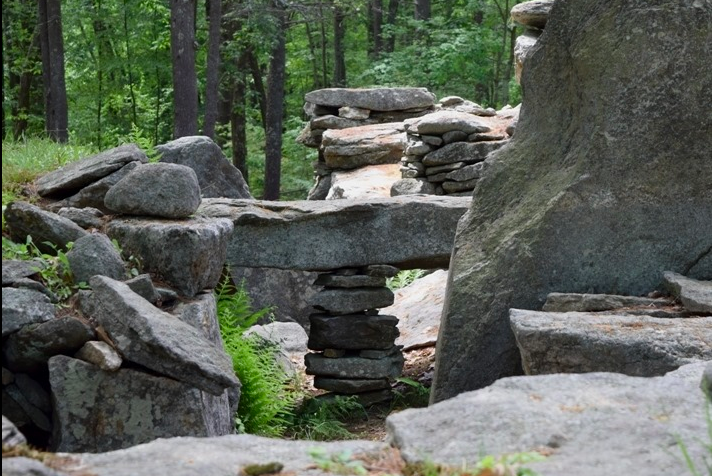 'American Stonehenge' is a mysterious archeological site in New Hampshire. Some believe its is more than 4,000 years old. Others believe it is the home of a 19th century shoemaker.

Mark Russo, 50, of Swedesboro, was charged with a felony count of criminal mischief following a 15-month investigation.

Russo allegedly snuck into the wooded area where the tourist attraction is located on Sept. 29, 2019 and defaced a rock tablet with a power tool, according to the Salem Police Department. Investigators found the stone had been knocked over, with the phrases 'WWG1WGA' and 'IAMMARK' carved into it.

The first is a common QAnon slogan that means "Where We Go One, We Go All." The second was a reference to Russo's name and social media handle, police said.

Police also recovered an 18-inch wooden cross that had been suspended between two trees. It featured photographs of three men and a boy. It also had hand-drawn images tacked to it. One of them appeared to depict the crucifixion of Jesus, according to police and court documents reviewed by Patch.

Owners of the archaeological site posted pictures of the damages to Facebook after the incident occurred. The property damage was estimated at more than $1,500.

During the night on Saturday, September 28th, a major feature of our site was defaced. A power tool was used to carve...

Investigators linked his profile picture to video surveillance from an incident in which Russo allegedly attempted to enter the site during business hours without paying.

Russo's lawyer entered a not guilty plea on his behalf Tuesday, the Associated Press reported. He was released on $3,000 bail. A dispositional hearing at Rockingham County Superior Court has been scheduled for April 21.

"America's Stonehenge" is thought to be more than 4,000 years old, according to the site's owners. No one knows who constructed it, but some believe it may have been built by Native Americans or European settlers that predated Christopher Columbus.

Still, some archeologists say it's more likely the home of shoemaker Jonathan Pattee, built in the 1800s.

Plymouth State University archeologist David Starbuck called the site "unquestionably provocative, puzzling and, above all, controversial." Yet, he doesn't believe it was built 4,000 years ago.

"There is probably no serious, trained archaeologist who believes that it was created thousands of years ago," Starbuck said.

After Russo was arrested, the owners of "America's Stonehenge" issued a statement thanking investigators for pursing the case. The FBI and Woolrich, New Jersey Police assisted with the investigation and arrest.

"We are pleased to announce that an arrest has been made as a result of the defacement of one of our historic structures," the statement said. "We would like to thank the Salem Police Department, in particular Detective Mike Geha who worked tirelessly on our case for over 15 months, the FBI, and all other resources that were involved. We would also like to thank our friends and neighbors for their support and for respecting our privacy."