Anaphylactic shock in the skies: Docs react quickly to save Bucks County woman 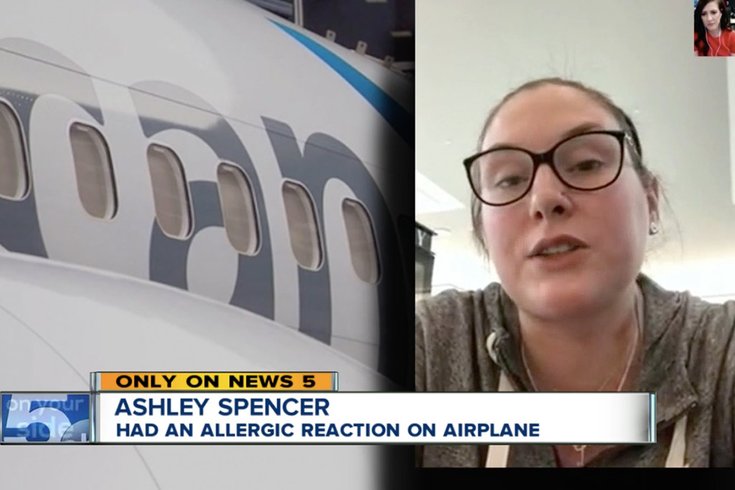 In this image from News5 ABC in Cleveland, Ashley Spencer is seen after her medical ordeal this weekend on a flight from Philadelphia to Cleveland.

Ashley Spencer had a guardian angel looking out for her in the skies over Pennsylvania.

Two of them, actually.

Spencer, 28, of Bristol Borough, Bucks County, was en route to Cleveland on Saturday for an appointment at the world-famous clinic in that city. She suffers from a rare auto-immune disease.

Not long after her American Airlines flight rose from the tarmac at Philadelphia International Airport she was hit by a wave of seasickness. She headed for the restroom to get sick. Then she noticed the hives and became unable to catch her breath.

Spencer quickly realized she was going into anaphylactic shock due to her peanut and tree nut allergy. She needed to get the Epi-pen from her purse up in first class, where her mother was sitting unaware of her daughter's medical emergency at the back of the plane.

Spencer rushed out of the restroom.

"I took about five steps and face-planted in the aisle," she recalled. "I had a pulse, but I stopped breathing for about 45 seconds."

She lost consciousness for a time.

A flight attendant immediately asked if there was a doctor on the plane. Two men stood up and rushed to where Spencer lay belly down in the aisle.

Dr. Erich Kiehl, a young doctor at the Cleveland Clinic, the academic medical center where Spencer was headed, sprung into action, assisted by Dr. Blake Cameron, a nephrologist from the Duke University School of Medicine.

To combat the shock, Kiehl jabbed her with the Epi-pen – four times in total, while Cameron helped monitor her vitals.

With her autoimmune disease and anemia, that much epinephrine can lead to heart problems, even cardiac arrest, Spencer said. Moreover, her heart isn't in the best shape due to her disease.

But Spencer had her guardian angel.

Kiehl, after all, was a cardiologist. If her heart seized with all that drug being injected into her, the doctor was ready to react.

"It's beyond scary," Spencer said. "I owe him my life. The doctors did a phenomenal job."

Eventually, the physicians stabilized Spencer as the plane headed for an emergency landing in Pittsburgh, where EMTs were waiting.

She spent Saturday night in intensive care at a Pittsburgh hospital.

'IT OVERTAKES YOUR BODY'

In addition to her allergy to peanuts and tree nuts, Ashley Spencer has Eosinophilic granulomatosis with polyangiitis (EGPA), or Churg-Strauss syndrome (CSS). It causes inflammation of small and medium-sized blood vessels in people with a history of airway allergic hypersensitivity.

Churg–Strauss, which can affect the lungs, heart, skin, gastrointestinal system, kidneys, muscles and joints – can be fatal without treatment. It is also incurable. 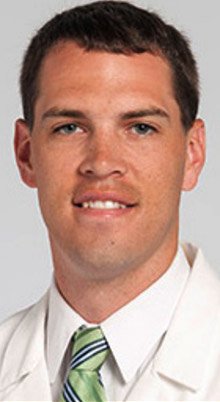 Dr. Erich Kiehl is a cardiologist at Cleveland Clinic.

"It overtakes your body and starts to shut down all your organs – slowly but surely," Spencer said. "But I believe in a positive attitude, and that is what keeps me going."

Spencer has had round after round of chemotherapy and steroid therapy in recent years in an effort to keep the syndrome at bay. She's had five sinus surgeries and suffers from nerve inflammation.

Twice, she has lost the ability to walk, but managed to walk again after physical therapy at St. Mary's Rehab in Langhorne.

Spencer attended Widener University to study to become a physical therapist, and worked for NovaCare for a time, before the disease interrupted her career plans.

On Sunday afternoon, Spencer was released from the hospital and left for Cleveland to keep her Monday morning appointment. Cleveland Clinic has specialists in her disease, and she is hoping to get a second opinion about treatment and perhaps get into a clinical trial.

But after Saturday's scare, her visit to the clinic now has a dual purpose.

On Wednesday, she will present a plaque to Kiehl, a small token of her appreciation for saving her life. Another plaque will be delivered to the Cameron. 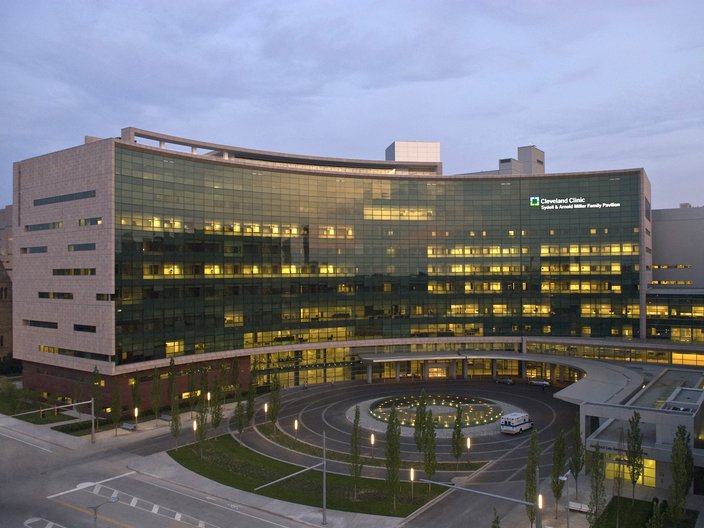 Ashley Spencer was on her way to the Cleveland Clinic for a consultation about her rare autoimmune disease. When she suffered anaphylactic shock on the airplane, a doctor from the same medical center helped save her life.

It was the kettle chips she purchased at the airport shop and ate just before her flight that triggered her allergic reaction. They were cooked in peanut oil. But that information wasn't on the label, Spencer said. 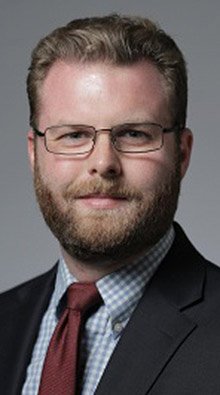 Dr. Blake Cameron is a nephrologist from Duke University School of Medicine.

"The chips were delicious," she said.

They almost killed her.

With the nature of her autoimmune disease, it's no surprise that Spencer is quite cognizant of the dangers of her nut allergy. "I know that I need to be extra careful," she said.

She doesn't remember the brand of the chips, she said, but on her return to Philadelphia later this week she will be going back to the same store to figure out who manufactured them.

And whoever that is will be hearing from Spencer. She intends to make clear that failure to include peanut allergy-related information can be a life-and-death problem.

And she's hoping to reach out to her elected officials, as well, for help in legislating a requirement for such information on food labels.

"We have a problem in Congress and they are not taking this seriously," Spencer said. "If it's going to take somebody to die – whether an adult or child – before they take action, that's ridiculous.

"I almost died on that plane."