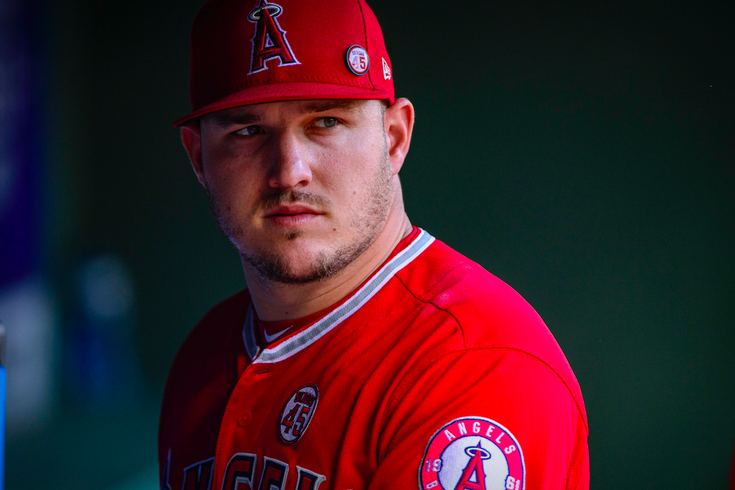 Los Angeles Angels center fielder Mike Trout wears a commemorative patch and pin honoring the memory of Angels pitcher Tyler Skaggs who passed away on June 1, 2019 before the game against the Texas Rangers at Globe Life Park in Arlington.

The tragic death of Los Angeles Angels pitcher Tyler Skaggs has left the sports world reeling over the loss of a talented young man who had his whole life ahead of him.

Skaggs, 27, was found dead Monday afternoon in a Southlake hotel room ahead of the Angels' scheduled game against the Texas Rangers. Officials found no signs of foul play involved and could not immediately determine the cause of his death.

Angels teammate Mike Trout was devastated by Skaggs' death, opening up to reporters after the team's first game without him.

"We lost a teammate, we lost a friend, a brother," Trout said. "We just gotta get through it. Skaggs was an unbelievable person. It was tough playing out there today, like (manager Brad Ausmus) said earlier, Skaggs wouldn't have wanted us to take another day off. All these guys in here, I see these guys as more than my family."

The depth of Trout's friendship with Skaggs involved trips back home to the Delaware Valley, where Trout grew up in Millville, New Jersey.

Mike Trout & Tyler Skaggs were such good friends, Mike brought Tyler (who was a Vikings fan) to Eagles NFC title win over Vikings. Tyler was with Mike here

Mike said:
“He started cheering for the Eagles. They turned him into a fan.” 🙏🏼 pic.twitter.com/g4VhSFEBUJ

Skaggs also was apparently friends with former Eagles running back Jay Ajayi, who expressed grief in an Instagram story this week, Heavy.com reported. Ajayi and Skaggs had rehabbed together after an ACL tear and Tommy John surgery, respectively.

The findings of Skaggs' autopsy are not expected to be released until the fall.

Words cannot express the deep sadness we feel right now. Our thoughts and prayers are with Carli and their families. Remembering him as a great teammate, friend, and person who will forever remain in our hearts... we love you, 45. pic.twitter.com/zCO8Ne01Gy