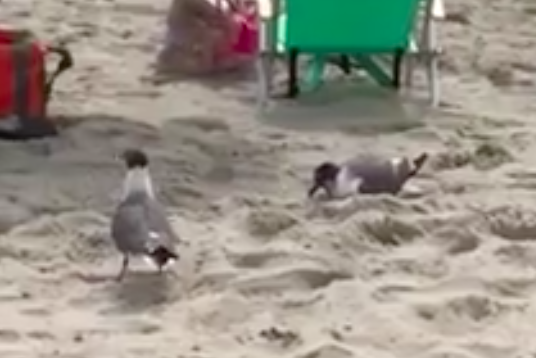 Seagull appears motionless on Ocean City beach witnesses say man "speared" the bird with the tip of a child-sized umbrella.

On an overcast Monday morning in Ocean City, beachgoers described a disturbing attack on a seagull as it grazed the sand for scraps of a sandwich.

Around 11:30, sisters-in-law Brittany and Michele DePasquale said they saw an unidentified man use the tip of an umbrella to spear the bird at close range, prompting outrage among those at the 12th Street beach.

"The seagulls are the way they are," said Brittany DePasquale. "They always go around people with food. They had a sandwich or something they got from somewhere else on the beach."

DePasquale said the man who threw the umbrella was at the beach with a woman who appeared to be his wife and his two grandchildren.

"He threw it once and missed the first time," she said. "The second time, he hit in the neck. It was like he was spearfishing. That's what it looked like."

Michele's brother had notified police and the lifeguard on duty about what happened, but the man was not arrested.

"He told police it was an accident," Michelle said. "He told them he threw it in (the gulls') direction and said he was protecting his family. It was clearly premeditated."

Michele was among several people who confronted the man after he threw the umbrella.

"At first, it kind of looked like he wanted praise," she said. "It was like he was in the Olympics and throwing a javelin, but in the wrong direction. He was about five, six feet away. I said, 'You just killed a bird. Are you going to do anything about that?'"

The man told her he was trying to find a bag, presumably to dispose of the gull.

As it turns out, the bird was not dead. The lifeguard was able to remove it from the beach, but its ultimate fate wasn't immediately known.

"It was still alive," Brittany said. "I think its neck was just broken. It was suffering. All the other seagulls were coming around it."

Michele and Brittany said several people at the beach approached the man and asked him why he would have done such a thing. His grandchildren appeared to be upset by what had happened, they said.

"'How could you do that?'" Brittany said she asked him. '"You should be ashamed.' I thought I was going to throw up."

Eventually, the man left with his family under pressure from other beachgoers. Police later returned to interview witnesses, but the man was long gone by that point, Brittany said.

"Literally everyone at the beach was in shock and awe. I'm so glad my 5-year-old niece wasn't there at the time."

"They're gulls. They take food. That's what they do. That's their life," Michele said.

Brittany said it was especially disturbing because the man was willing to act that way in a public place with children and tourists around.

"I'm a huge animal advocate," she added. "People might think I'm crazy, because it's bird. But it's still a living creature. I didn't want to have to see that."