Could be a hint at screen specs for future iPhones 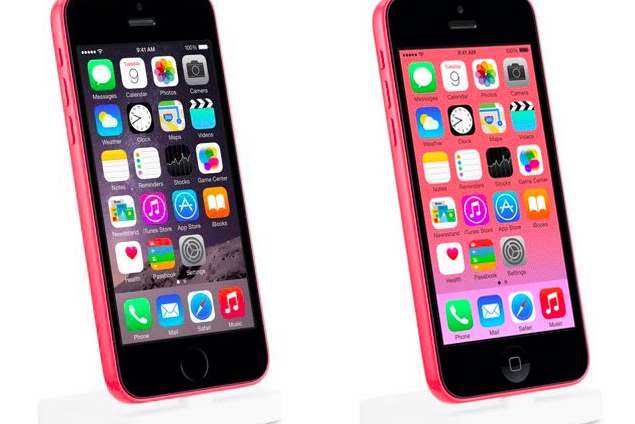 An image that appeared briefly on the Apple Store website looks to be the rumored iPhone 6C. On the left is the iPhone 5C/6C with Touch ID. On the right, the current iPhone 5C.

Apple accidentally gave the world a peek at an upgrade to one of its iPhones on Friday when it posted images on the Apple Store website promoting the launch of its new Lightning Dock.

The blunder, caught by Forbes, shows what appears to be an iPhone 5C, except that it has a Touch ID fingerprint sensor that would strongly suggest it's a successor phone.

Forbes says that there's good and bad news about the leak, which looks to be the rumored iPhone 6C.

On the positive side, an iPhone 6C suggests that Apple will continue the C line as a budget phone, maintaining a range of 4-inch phones for fans who aren't interested in the larger displays. The upgrade would also have improved specifications likely based on the iPhone 5S (since iPhone 5C is based on iPhone 5). This would nearly double the performance, with an improved camera and a 64-bit chipset.

The bad news is that an iPhone 6C potentially means there won't be a premium-level, 4-inch iPhone 6S with corresponding feature and spec improvements. If there isn't, the 6C could mark the end of 4-inch iPhones at the top end of the range.

With iOS 9 expected to be on the horizon at the Worldwide Developers Conference beginning June 8, there may be new information to come about the iPhone seen in the leaked image.