Commission to receive $675,000 in funding from Percent for Art Program 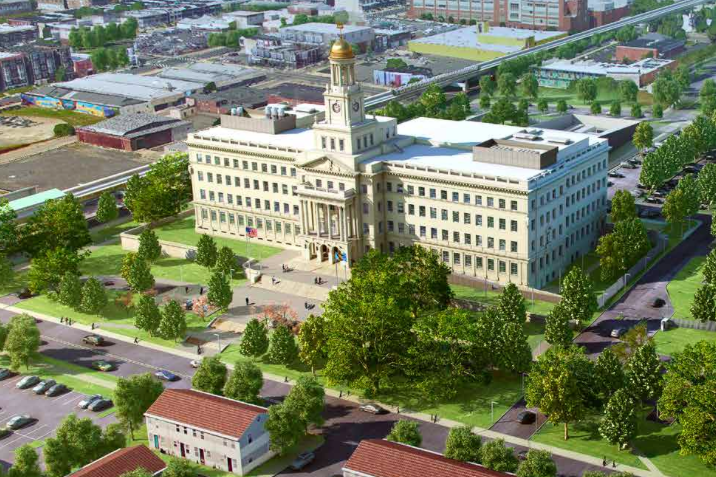 Rendering of the planned Philadelphia Public Safety Services campus at 46th and Market streets, which will house the Philadelphia Police Department and Department of Public. The renovation is expected to be complete in 2018.

Several artists will make public presentations later this month for an eventual installation at the new headquarters of the Philadelphia Police Department and the Department of Public Health.

Both departments plan to take up residence at 46th and Market streets, where the 13-acre site of the historic Provident Mutual Life Insurance building will undergo a conversion, PlanPhilly reports.

The public art installation, to be located at the Public Safety Services Campus, will be selected based on its interpretation of how the PPD and DPH relate to the community, according to Dennis Cormier of Ballinger Architects, which is planning the new campus.

Funding for the $675,000 project will come through the Philadelphia Redevelopment Authority's Percent for Art Program, which was established in 1959 as the nation's first initiative requiring developers to commission public art along with their projects.

The $250 million renovation of the Provident Mutual Life Insurance Building, constructed in 1929, will also house the Philadelphia Medical Examiner's Office and city morgue. A public plaza will be built at the corner of 46th and Market streets and will serve as the location for the public art installation.

Artist presentations will be made to Percent for Art on Tuesday, November 17, at a location still to be determined.

Work on the Provident site, which has been unoccupied for the past seven years, began at a groundbreaking ceremony in October 2014. The Public Safety Services Campus is expected to open in 2018, leaving vacancies at the current sites of the Philadelphia Police Department (8th and Race streets) and Department of Public Health (Broad and Lombard streets).