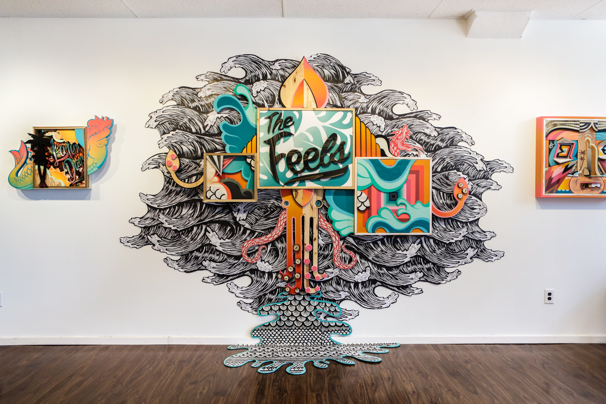 Good vibes are the theme to Paradigm Gallery’s new exhibition, "Good Medicine." A collaborative effort between artists Dennis McNett and Alex Yanes, the show pairs new pieces by the artists and pieces they cultivated together. The installations radiate bright and bold graphics as it blends with traditional folk art.

The images create an immersive experience as both artists create with wood, resin, and acrylic. It’s a contrast between Yates pop-esque and lively imagery, inspired by his hometown of Miami, Fla., while McNett’s more traditional wood sculptures stay rooted within mythology and spirituality.

Their paths intertwine with a deep interest in wood carvings and heritage, and a background in skateboarding subculture. In their collaboration, they worked on developing the concept of positivity and playing with the fluidity of culture.

Paradigm Gallery states: “The show considers the concept of positive energy and how moods, situations, or experiences can be shaped by the presence of a strong force for good, while focusing broadly on the many ways that spirituality is practiced and explored in contemporary culture.”

McNett is based out of his studio, Wolfbat, in Brooklyn, N.Y. He has 15 pieces featured, including an Owl Spirit sculpture series and "Big Mary’s Resurrection." He was a resident of the Philadelphia Mural Arts program and his mural can be seen on 1016 ButtonWood St., in the Callowhill neighborhood. He was also a lecturer at the Pennsylvania Academy of Fine Art in 2017. Yanes, based in Miami, Fla., is featuring seven pieces of his work in the event. He has been featured in multiple galleries throughout the country, including Philadelphia.