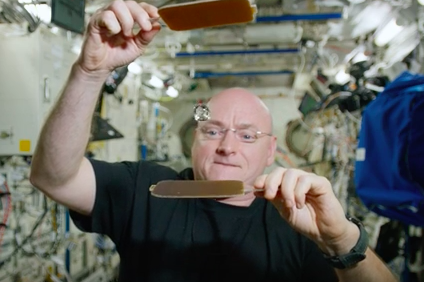 The general expectation of astronauts on the International Space Station is that they are constantly at work on cutting-edge research, but over the course of the past year, Scott Kelly has become a bit of a space celebrity for his quirky videos from above.

On the 300th day of his record-breaking 340-day stretch on the ISS, Kelly posted a video of himself playing ping pong with an orb of liquid between two hydrophobic paddles that were laser-etched and sprayed with Teflon, according to The Verge.

The video stands out not only because Kelly appears to feign boredom, calling the experiment "neat stuff," but also because it marks the latest in a series of 4K clips sent to Earth using a RED Epic camera.

Kelly is joined on the mission by Russian astronauts Mikhail Kornienko and Gennady Padalka as they seek to gain insight into the longterm effects of weightlessness on the human body, which can be used to assess the feasibility of future manned missions to Mars.

Keep up with Kelly's space activities on Twitter and Instagram, where he frequently posts updates. The team will return to Earth in the Spring.