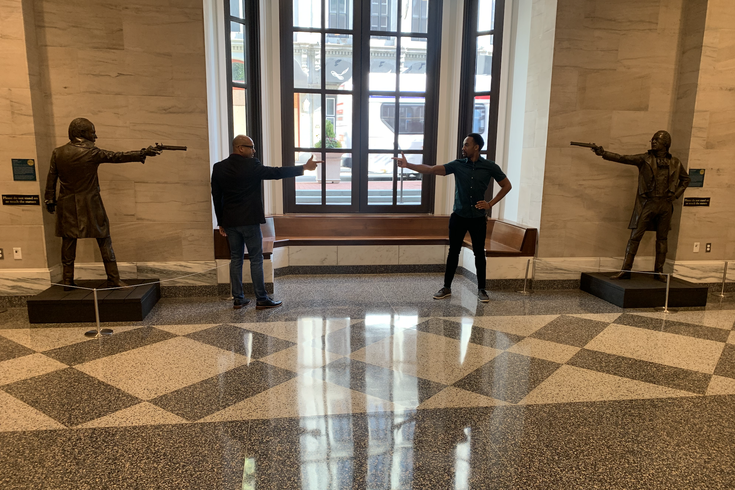 'Hamilton' stars Edred Utomi and Josh Tower re-enact the duel between Alexander Hamilton and Aaron Burr near statues of Hamilton and Burr at the Museum of the American Revolution.

"Hamilton," currently about a third of the way through its long-awaited Philadelphia run at the Forrest Theatre, is set during the American Revolution and the early days of the nation.

And while our city isn't mentioned by name in Lin-Manuel Miranda's musical, the current production is the first-ever staged on a street — Walnut Street — where Alexander Hamilton once lived.

On Wednesday morning, PhillyVoice joined in as a trio of actors from the Angelica tour of "Hamilton" saw some Alexander Hamilton-related artifacts at the Museum of the American Revolution in Old City and toured the important spots in Hamilton history throughout the neighborhood.

As Benjamin Franklin, famously, is not in Hamilton, it may have been the first Old City walking tour in history to skip the Franklin sites. The outdoor tour did include the location where Alexander Hamilton's house stood in the 1790s, which is now the Nelson Building, next to the Ritz Five movie theater.

Taking part were Edred Utomi, who plays Hamilton in the production; Olivia Puckett, who has the dual role of Peggy Schuyler and Maria Reynolds; and Josh Tower, the Ambler native and Upper Dublin High School and Temple alum who plays Aaron Burr. In addition to viewing the various Hamilton-related antiquities and sites, Utoni and Tower posed in front of statues of Hamilton and Burr's famous 1804 duel.

Utomi grew up in Las Vegas and started acting in high school. He joined the tour as a standby, covering several roles, and has been the primary Hamilton since the early part of this year. 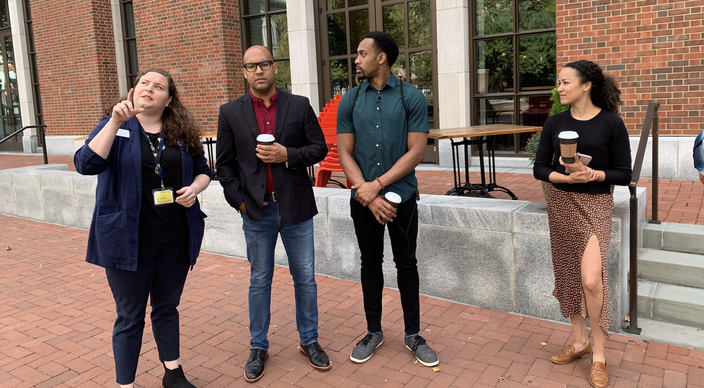 Meg Bowersox leads actors Josh Tower, Edred Utomi and Olivia Puckett – all members of the cast of 'Hamilton' performing at the Forrest Theatre – on an Old City tour, highlighting locations significant to Alexander Hamilton's history in the Philadelphia.

"It's a real experience, it's a dream come true," Utomi said performing as the show's star. "I never thought it would come so soon, so when I got the opportunity to play it, it was such an honor."

Utomi, who says "Hamilton" creator Miranda's "In The Heights" is his favorite musical, had no professional experience with rapping prior to joining Hamilton, although he grew up listening to hip-hop music and spends a lot of time watching battle rap videos on YouTube.

Tower, was present for the creation of "Hamilton," as he was part of an early workshop of the show, playing George Washington, when Miranda was putting it together. The original  Aaron Burr, Philadelphia native Leslie Odom, Jr., was part of that workshop, as well.

"When I came back and when they interviewed me for this role, they kind of felt like they were bringing back a family member, who knows it and kind of knows the maturation of the whole piece," Tower said. The show has changed a lot since that early workshop, he added, most notably with the addition of elaborate choreography and staging. 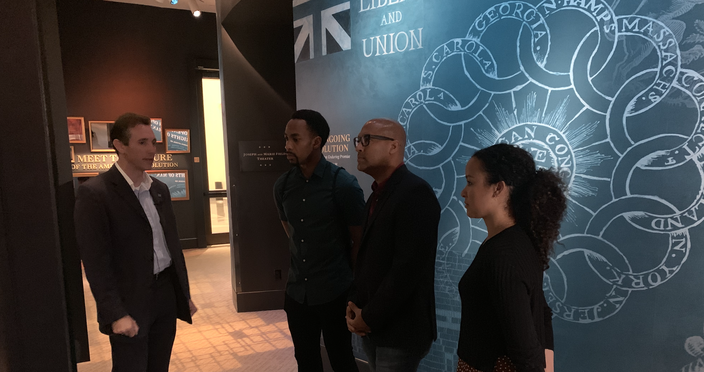 Curator Mark Turdo of the Museum of the American Revolution, 101 S. Third St., in Old City,Philadelphia, gives the 'Hamilton' actors on a tour.

Tower studied acting at Temple, before getting an acting MFA at the University of North Carolina and then heading to New York to pursue acting professionally.

As the local person in the cast, Tower said he's tried to encourage his castmates to see the sites of Philadelphia, everything from the Philadelphia Museum of Art to getting a cheesesteak at Jim's.

The actor said in a recent interview that his dream is to sing the national anthem at an Eagles game, and that dream will soon come true: He's set to sing the "Star-Spangled Banner" on Nov. 3, prior to the Eagles game against the Chicago Bears.

Tower has been practicing, and while some of the songs in Hamilton are uncommonly complex, The Star-Spangled Banner is "a tough song" as well.

"You can either completely mess it up, or just put it right where it needs to be," Tower said of the anthem. "So that's what i'm going for – simplicity will be the key."

Olivia Puckett is a San Diego native, who moved to New York for college and "started hustling and working" after that. Part of the tour since February, Puckett plays two different roles in the show: Young Schuyler sister Peggy in the first act, and Maria Reynolds, with whom Hamilton conducted a "torrid affair" in the second.

"I think it's an actor's dream," Puckett said of playing two different roles each night. "You really get to put on two different hats. You get to be young, and effervescent, and try to learn, and then I get to be kind of sultry, and look for my independence, and learn to make my way in the world."

The place where Hamilton and Maria Reynolds had their affair, which led to a blackmail plot and ultimately the United States' first political sex scandal, was on the walking tour.

Puckett said she's been getting to know the city by walking to work each day. 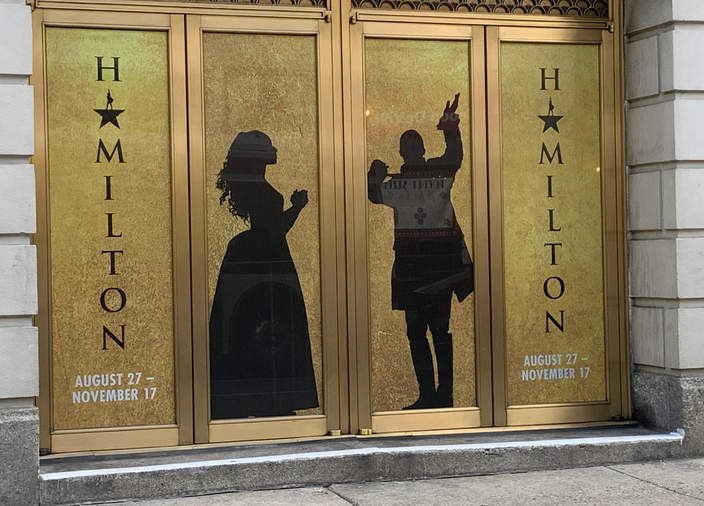 'Hamilton' runs at the Forrest Theatre through Nov. 17.

"I'm not a huge U.S. history buff," she said, "and this show has sort of forced me to spark an interest, which it has, and it's never too late to learn about the creation of your country. I'm kind of mad at myself for not listening in seventh grade."

"It's the history of the entire country," Tower said of Hamilton. "There's not many shows that offer that – and offer it with a familiar face. It's a reflection of what is the current look of the United States."

"Hamilton" runs at the Forrest Theatre through Nov. 17. Tickets are available through Telecharge.