Bad For You - Cheetos’ Sweetos

If you’re a regular reader of this column, you might be an angry commenter or my mom. (And she’s actually both.) Either way, you may know that I have a long, strange history with Cheetos that goes back to childhood. I have never liked them because they smell weird and they remind me of eating Styrofoam, which freaks me out. And yes, I realize this is not normal.

I have avoided Cheetos my whole life, except for two Bad For You reviews. The first was Burger King’s Mac ‘n’ Cheetos, which made me throw up in the parking lot of a Phish concert. The second time was also at BK, when I had their Cheetos Chicken Fries, which were not as terrible.

When I was searching the snack aisle looking for new foods to review, I spotted something called Sweetos. They are—surprise!—a sweeter, non-cheese spin-off of Cheetos. Once I saw them, I knew I had to review them to complete this disgusting trilogy. 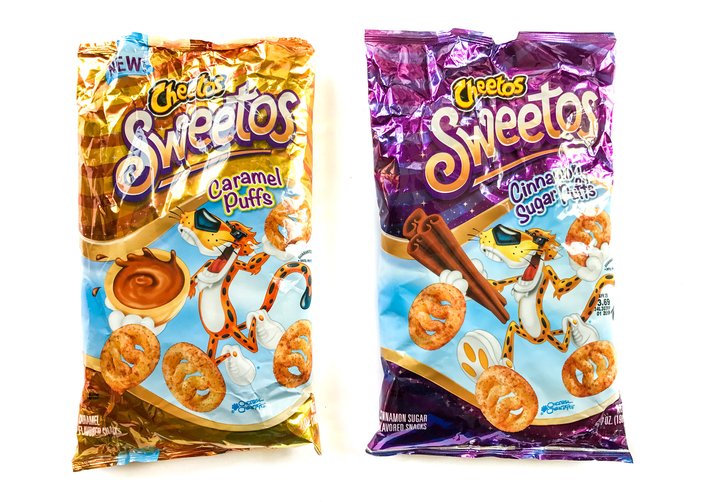 Sweetos actually debuted in 2015 with the original flavor of Cinnamon Sugar Puffs for a limited time. They have been occasionally brought back both around Easter and in the wintertime. This year, they have released them again as a Spring-exclusive but with another new flavor option called Caramel Puffs. Interestingly enough, while previous bags featured Cheetos’ mascot Chester The Cheetah dressed as the Easter Bunny (or sledding during the winter-version), this one features a regular, non-clothed Chester.

This is strange as Cheetos is heavily pushing their products for the holiday, including holding Easter-themed contests. The Sweetos are even oval-shaped, which are supposed to be reminiscent of eggs. This is most certainly true, because when the winter-version was released, they did not have an egg shape. Instead, they were just circles. All in all, this is a moot point, as the actual puffs in the bag don’t really resemble anything. 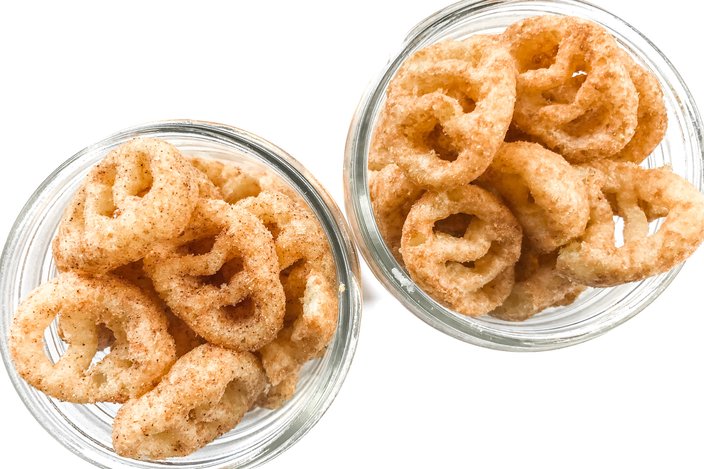 Cheetos and Sweetos are so onboard the Easter train that they are releasing their own "clothes" that feature Cheetos and Sweetos-themed pockets or even pants with built-in napkins. It’s called the Cheetos Spring Snack Line. They announced this in a press release that states, “Cheetos Spring Fashion Collection Helps Fans Get Family Photos on Fleek .”

In preparation for these reviews, I often read a bunch of press releases full of corporate buzzwords and “hip” marketing slogans and I die a little inside each time. But “on fleek”? I’m not cool in any respect, but even I know that people don’t say that anymore.

So how are these sweeter Cheetos? Not very good. 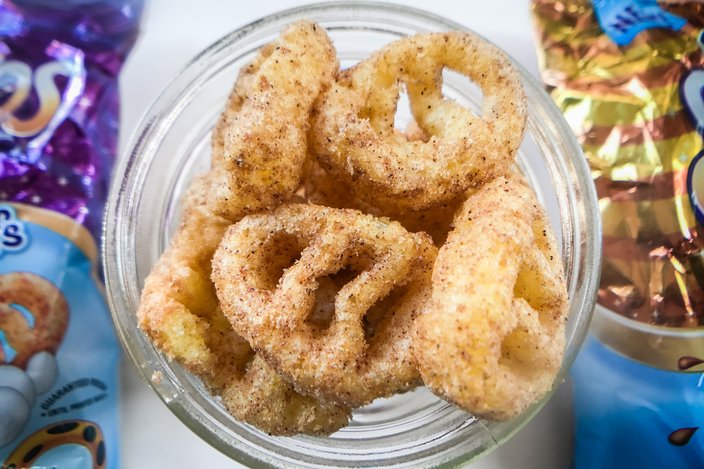 We’ll start with the original Cinnamon Sugar Puffs flavor. Upon opening the bag, it smells like a delicious churro or Taco Bell’s excellent Cinnamon Twists. Unfortunately, upon tasting, you quickly learn they are simply not on that same level as those two. Just like Cheetos, Sweetos have a similar puffed-corn base, though then they sprinkle it with cinnamon and brown sugar. However, because of this light and airy nature, the puffs dissolve in your mouth very quickly, which is a bizarre feeling. And just like the dissolving puff, the flash of delicious cinnamon is quickly washed away too soon. Then you are left with a subpar corn puff. If there’s was a way to add even more “oomph” with the cinnamon, these might have been very good. As they stand now, it’s all just a tease that leaves you unsatisfied.

Regardless, the Cinnamon Sugar Puffs were the better of the two when compared with the new Caramel Puffs. The smell reminded me of Bimbo’s Rebanadas, which I previously reviewed, and were way better than this. Although there is a moment of sweet caramel taste, just like the other flavor, it’s too fleeting to really savor it. They end up being a bland, slightly sweet snack that doesn’t ever fix your craving of caramel or fulfill its promise of deliciousness.

Verdict: An interesting spin, though ultimately disappointing. I would say to stick with the original Cheetos, but they are my sworn enemy.