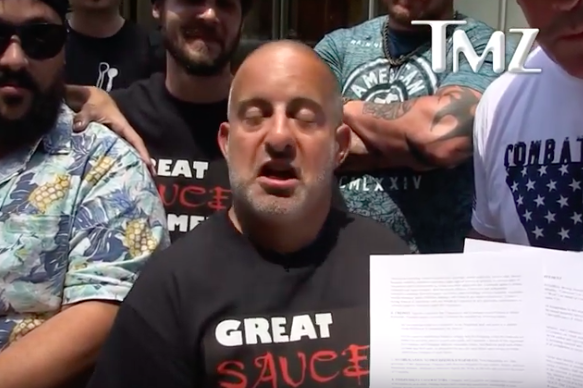 Chris Morgan, aka Bagel Boss, will reportedly participate in a fight at Atlantic City's Showboat Casino on Sept. 7, 2019. Morgan drew notoriety after a viral video showed him lashing out about height discrimination at a Bagel Boss location in Long Island, New York.

The Long Island man who went viral last week for having a meltdown at a Bagel Boss will reportedly parlay his humiliation into a fight in Atlantic City, earning five or six figures in the process, according to TMZ.

Chris Morgan's explosive tirade drew millions of views last week as the diminutive customer was captured ranting about the injustices of online dating. His treatment of the shop's female staff, who didn't appear to provoke him, eventually resulted in him getting leveled by a larger man in the store. No charges were filed in the incident.

so in bagel boss this morning, the misogynistic douchebag seen in the video was degrading almost all of the female staff as well as other patrons. fuck this guy. pic.twitter.com/LZh1Uk4UXZ

If you guys wanted to know what happen next, here ya go pic.twitter.com/jOHzispksW

Subsequent investigation of Morgan's background revealed that he has a history of instigating conflicts with strangers, often using his height (he's about 5 feet tall) as a launch point to escalate perceived slights.

RELATED: Pink fires back at critics of photo with kids running through Holocaust memorial

The pair of videos at the bagel shop unleashed a flood of ridicule belittling Morgan, whose misplaced anger and belligerent misogyny made a caricature of the legitimate gripe some men of short stature have about double standards in the world of dating. (Tinder's own April Fools joke was a bogus height verification feature, so it's a subject that warrants more thoughtful examination than Morgan's negative publicity and exploitation, frankly, are giving it).

As would happen only in America, it appears that Morgan is going to cash in on his 15 minutes of infamy. Or as he puts it, his rise to become the "Martin Luther King Jr." of scorned short guys.

Fight promoter Damon Feldman has reportedly signed the 45-year-old Morgan up for a September fight at Atlantic City's Showboat Casino. On Sept. 7, Morgan will fight another viral celebrity who has not yet been identified.

Feldman famously once promoted a fight between George Zimmerman and rapper DMX — a fight that never happened. It wouldn't be a shock if this bout were to eventually fall through.

As for Morgan's chances in a fight, there's already a pretty clear blueprint for how to bring him down: Let him exhaust his energy yapping, and then swipe left.