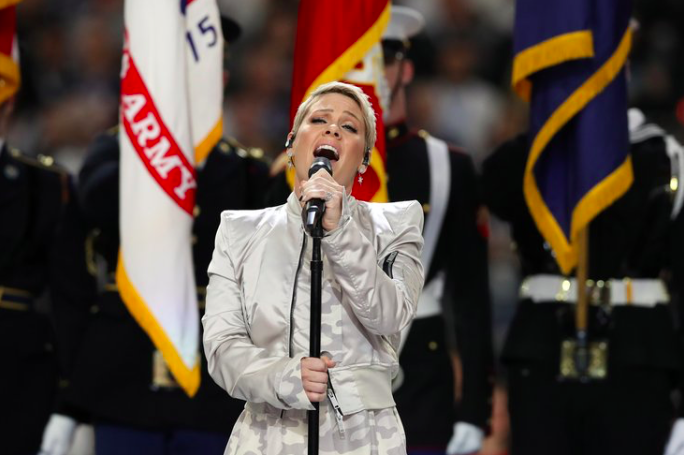 Pink shared a picture of her two children running through a Holocaust memorial in Berlin, Germany. Critics on Instagram questioned the pop singer's parenting skills — one of many times that has happened online — but others stepped up in her defense.

Pop singer and Doylestown native Pink is standing up for herself after critics chided her for sharing a photo of her two children running through Berlin's famous Holocaust Memorial.

During a recent trip to Germany, Pink, born Alecia Moore, visited Peter Eisenman's "Memorial to the Murdered Jews of Europe," an architectural phenomenon that starkly illustrates the human toll of the Holocaust.

The memorial consists of 2,711 concrete slabs of varying heights arrayed across a vast, sloping field at the former site of the Berlin Wall.

Pink visited the memorial with her young son and daughter and took a photograph of them running between the concrete slabs. The photo she shared garnered an avalanche of comments and a debate about whether it was appropriate for the kids to be running through such a solemn setting. Pink, who is Jewish, responded and was backed up by many of her fans.

Berlin, I love you. #holocaustmemorial #panamarestaurant #cocktailclasses #history #herstory #worldtour and for all of the comments; these two children are in actuality Jewish, as am I and the entirety of my mothers family. The very person who constructed this believed in children being children, and to me this is a celebration of life after death. Please keep your hatred and judgment to yourselves.

"No respect for the loss," one commenter wrote.

"A memorial is NOT the place to have kids running around NO MATTTER who they are," said another. "Using celebrity status to garner support for your poor parenting decision is ridiculous."

"There will be those that give you crap for allowing your children to run around at the Holocaust memorial," one supportive fan wrote. "I think it's wonderful to bring life and joy to a place that held so much sorrow and death. While we remember we also live on."

Eisenman has previously stated he does not object to people making routine use of the space. He and others have differentiated it from the sites of concentration camps.

“People have been jumping around on those pillars forever. They’ve been sunbathing, they’ve been having lunch there and I think that’s fine,” Eisenman told the BBC in 2017. “It’s like a Catholic church, it’s a meeting place, children run around, they sell trinkets. A memorial is an everyday occurrence, it is not sacred ground.”

Pink, 39, has been criticized in the past for sharing pictures of her kids online. Speaking to Ellen DeGeneres earlier this year, she said she planned to cut back on how much she made her family life public to avoid unwarranted judgment of her parenting.

"I don't like how brave people are anonymously," Pink said. "And rude. Just mean. Mean-spirited."