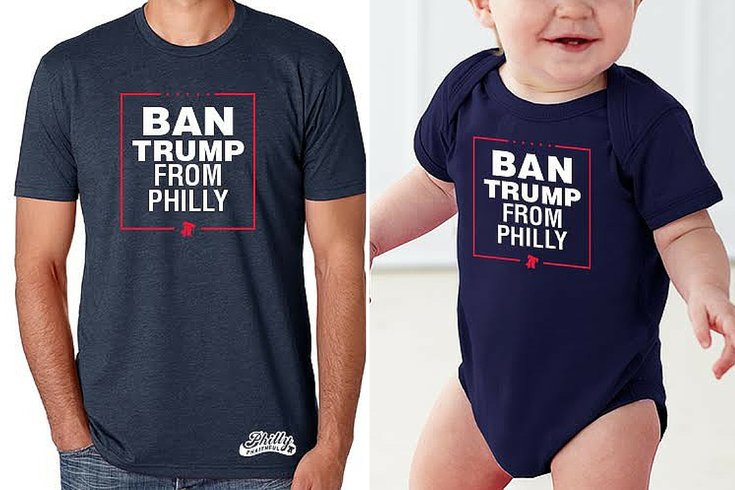 Northern Liberties-based clothing brand Philly Phaithful, known for its quirky, city-loving T-shirts (one of which was featured in our local gift guide), has added a new item to its winter lineup. The "Ban Trump From Philly" shirt, sporting a slogan with a red-white-and-blue theme, comes days after Donald Trump and Mayor Michael Nutter exchanged words following Trump's call for banning all Muslims from entering the United States.

The statement, of course, has caused a huge controversy for the politician. Mayor Nutter quickly said he'd like to ban Trump from Philadelphia if he could ("He's an a**hole," said Nutter) causing Trump to mistakenly fire insults back at a faux Nutter Twitter account. Philly Phaithful's new design supports the Mayor's side of the argument.

"I'm generally against designing anything that could be construed as controversial, polarizing or outwardly hostile," said Philly Phaithful owner Daniel Hershberg in a statement announcing the shirt's release. "However, in this particular case, as an American -- moreover, a human being -- I view Trump's rhetoric to be simultaneously shocking, inflammatory and irresponsible. I felt like making an exception to the rule."

"I'm not looking to make a political statement with this shirt, rather, I simply feel that Philadelphians don't tolerate BS and we wouldn't benefit from his presence in the City of Brotherly Love," Hershberg said.

Both women's and men's versions of the shirts can be purchased online for $24.99 and a baby's onesie can even be purchased for $21.99. The design is part of the brand's Philadelphia Collection for the holidays.

Also part of that holiday release? A "Game of Cones" design which mashes together popular TV show "Game of Thrones" and its catchphrase "winter is coming" with the Philadelphia tradition of saving snow-shoveled parking spots with orange cones.