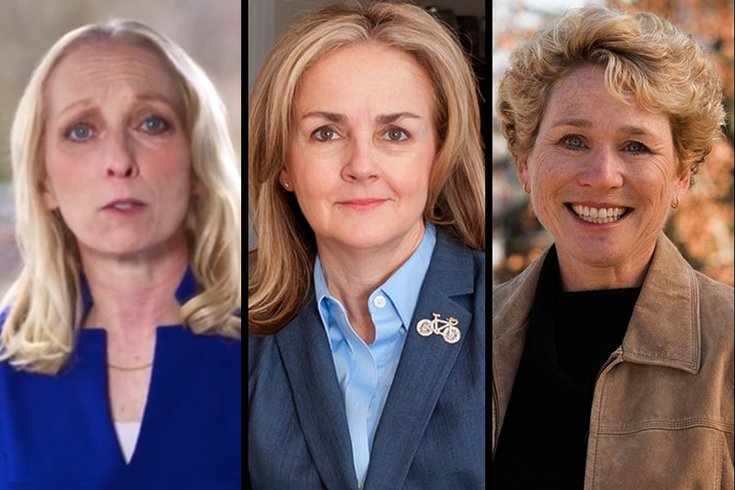 Three suburban Philadelphia women were elected to the U.S. House of Representatives on Tuesday in a year that saw a record number of women running for political office, according to the Associated Press and other media outlets.

Susan Wild, a Democrat from Lehigh Valley, will be the state's fourth woman in the U.S. House – the most ever to represent the state.

Their victories came as Democrats were projected to win control of the U.S. House. Democrats needed a net gain of 23 seats and Pennsylvania – which was voting under newly-drawn districts – had been deemed essential to their cause. That was particularly true in the Philadelphia suburbs, where Democrats had the opportunity to net four seats.

With two women running for the open seat in District 5, which encompasses Delaware County and part of Philadelphia, Pennsylvania's congressional delegation had been guaranteed to include at least one woman. But suburban voters agreed 2018 would be a big year for women candidates.

Elsewhere in the Philly region, Democrats Brendan Boyle and Dwight Evans were re-elected to the U.S. House, according to the Associated Press.

As the Philadelphia-area congressional races are decided, individual capsules will be updated below:

Incumbent Republican Brian K. Fitzpatrick narrowly defeated Democrat Scott Wallace in District 1, which now includes all of Bucks County and a small sliver of Montgomery County. Steve Scheetz, a Libertarian, is also on the ballot.

Wallace conceded around 11:40 pm. Tuesday. At that point, Fitzpatrick had garnered 51.5 percent of the vote, according to unofficial vote tallies. Wallace held 48.5 percent.

Fitzpatrick, 44, a Middletown Township resident, was elected in 2016 to the Eighth Congressional District, the precursor to the newly drawn district, succeeding his brother Mike, who had held the seat from 2011-2016.

Wallace, 66, an attorney and Buckingham resident who was endorsed by the Bucks County Democratic Party, recently stepped down as co-chair of the Wallace Global Fund. He previously was counsel to the U.S. Senate’s Judiciary Committee and Committee on Veteran Affairs.

Scheetz, a Langhorne resident, is a coating-applications specialist and market researcher. He chaired the Pennsylvania Libertarian Party from 2013 to 2015.

With 98 percent of precincts reporting, Boyle had received 79 percent of the vote. Torres had gained 21 percent. All vote tallies are considered unofficial.

Boyle, 41, of Somerton, won his third term, having first been elected to Congress in 2015. Previously, he represented the 170th District in Northeast Philadelphia from 2009 through 2014, and before that served on Ed Rendell’s 1995 mayoral campaign and Bob Casey’s 2002 gubernatorial bid.

Torres, 59, a New York City native who lives in West Kensington, lost his son to opioids and has run programs for people with substance-abuse problems as well as the homeless. A graduate of Thomas A. Edison High School, he also was an HMO sales manager.

With 98 percent of precincts reporting, Evans had received 93 percent of the vote to Leib's 7 percent.

Evans, 63, sought his second full term in the Congress after serving in the state House for 35 years and as the longtime chair of the House Appropriations Committee.

Leib, 32, a resident of Center City, is treasurer of the Philadelphia Young Republicans. An automotive wholesaler, he is a member of the Young Friends Board of the National Museum of American Jewish History and has served on the board of the United Way of Greater Philadelphia and Southern New Jersey.

Democrat Madeleine Dean defeated Republican Dan David in an open seat race in District 4, which encompasses most of Montgomery County and a small part of Berks County, including Boyertown.

With 86 percent of precincts reporting, Dean had gained 63 percent of the vote. David had received 37 percent.

David, 49, of Towamencin Township, is a businessman with an equities-market research firm in Skippack.

Dean, a Jenkintown resident, is a former state representative who also has practiced law and taught at La Salle University, where she completed her undergraduate degree.

With 88 percent of precincts reporting, Scanlon received 64 percent of the vote to Kim's 36 percent.

The two candidates also squared off in a special election for the former Seventh Congressional District, which opened when Republican Pat Meehan resigned amid accusations of sexual harassment. Scanlon also won that race for the balance of Meehan's term that runs until January. As a result, she will have more seniority than Dean, Houlahan and Wild.

Kim, an attorney and Radnor resident, is a former senior deputy state attorney general. From 2007 to 2017, she was an assistant district attorney in Delaware County, heading the office’s Human Trafficking Unit. She served on the Delaware County Women’s Commission and the Governor’s Advisory Commission on Asian American Affairs.

Scanlon, an attorney who lives in Swarthmore, was a longtime member of the Wallingford-Swarthmore School Board. She was national pro bono counsel at Ballard Spahr, a Philadelphia law firm, where she worked with former Gov. Ed Rendell. She also was an attorney or board member for many years with Support Center for Child Advocates.

With 74 percent of precincts reporting, Houlahan had received 60 percent of the vote compared to McCauley's 40 percent.

Houlahan, of Devon, is a former executive of a footwear company and nonprofit who has served in the U.S. Air Force Reserve and as a chemistry teacher in a North Philadelphia charter school.

McCauley, 61, lives in Chadds Ford. An independent tax attorney and investor, he has owned and operated fast-food franchises with family members.