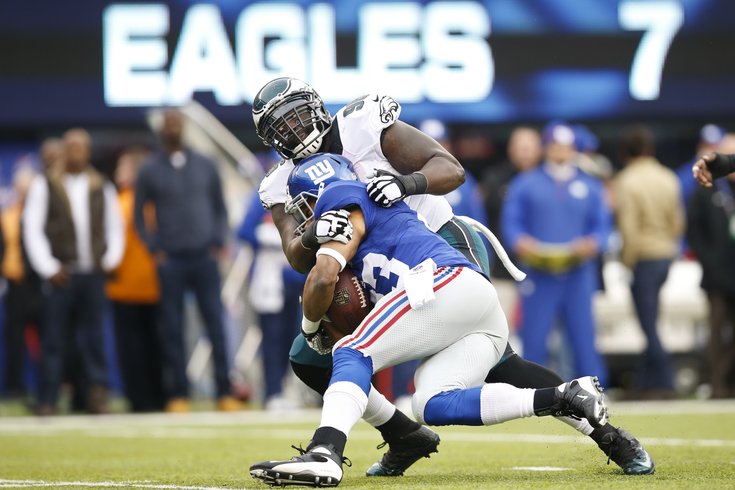 Bennie Logan engulfing running backs could be a common sight this season.

Sunday, we showed all 10 of Sam Bradford's passes in the Eagles' third preseason game, in which he was perfect. Today, we'll show 10 gifs of Eagles NT Bennie Logan (#96 below), who appears like he may be making a huge a jump in his third year in the league. Logan has only played 40 snaps this preseason, but he has been downright dominant controlling the line of scrimmage so far. Look at the number of plays he has made in limited action:

• Play #1: Watch how quickly Logan is out of his stance at the snap. He gains instant leverage on the center, easily sheds his block, and gets to the ball carrier.

• Play #2: Again, watch how quickly Logan gets off the ball. The Colts are asking too much of old friend Todd Herremans (#79) here, who has no chance of getting over to his left to block a player as quick off the snap as Logan, who destroys this play in the Colts backfield.

• Play #3: Here, Logan sheds the block, jumps into the hole to his left, and throws the ball carrier to the ground. Bennie is a man.

Here's another view of this play:

• Play #4: Nothing crazy here, but you can see Logan's quickness getting down the line to make a tackle.

• Play #5: Logan doesn't make the play here, but once he gets free of his blocker, look at how quickly he accelerates through the line. I watched this gif continuously for a minute or two. His short area quickness is really impressive.

• Play #6: Logan wins at the point of attack, flows down the line and is in on the tackle.

• Play #8: Logan doesn't make the play here, but watch him dominate the Packers center and get deep into the backfield.

• Play #10: Logan pushes the center into the backfield again, gets in on the tackle.

• Play #11: And hey, if you let him, Bennie has the skills to create pressure in the passing game too. Here he is blowing past the center and causing some disruption.

Again, Logan has only played 40 snaps this preseason. The havoc that he created above is very impressive considering the limited amount of playing time he has had, and to be honest, I really could have included more.

Remember when the Saints converted some 3rd and shorts in the playoffs against the Eagles and a lot of people blamed Bennie Logan? Yeah, I think he's going to be OK.