Investigators used DNA analysis and genome sequencing to identify Lisa Todd, who was 17 when she died 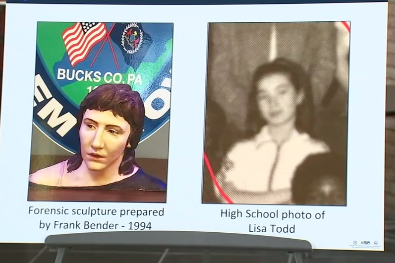 Lisa Todd, of Philadelphia, went missing in 1985 when she was 17 years old. Investigators now say the skeletal remains of a pregnant woman found in a Bensalem well have been linked to Todd by extensive DNA testing.

Human remains found in a Bensalem well more than 30 years ago have been identified as Lisa Todd, a Philadelphia teenager who was pregnant at the time she went missing in October 1985, investigators revealed Tuesday night.

In 1988, skeletal remains were found inside a well at the former Publicker Distillery on State Road in Bensalem, now a trucking depot. Authorities were unable to identify the victim, who was believed to be between 17-23 years old. Investigators determined the Todd was about six months pregnant when she died.

On Tuesday night, Bucks County prosecutors presented the genome sequencing and DNA test results that they used to positively identify the victim as Todd, who was 17 when she died, 6ABC reported.

An investigation that began with a forensic sculpture in 1988 took leaps forward with the aid of DNA analysis, enabling authorities to raise new questions about the circumstances that led to Todd's death.

The DNA testing took place over the course of several years. DNA was first extracted from the skeletal remains in 2007 and later from fetal bones in 2017 and 2020. When Bensalem detectives reached out to Todd's living relatives in Philadelphia, genealogists were able to construct a family tree.

Investigators believe Todd had a 2-year-old child at the time of her death. She is thought to have briefly attended Frankford High School and dropped out in her freshman year.

With Todd's identity confirmed, investigators are hoping that anyone who may have known her at the time can come forward with information that may explain how she died.

Anyone with information is asked to call Bensalem Township Police Department Detective Chris McMullin at (215) 633-3719 or contact the Bucks County District Attorney's Office.