Bernie Sanders made his presence felt at the inauguration of President Joe Biden on Wednesday in a way only he could. In the freezing air outside the U.S. Capitol, there sat Sanders in his large mittens and familiar coat, projecting an aloof approval of the proceedings that struck a chord with his supporters.

Within hours, the Vermont senator's pose had risen to bobblehead-worthy status, with a pre-order form released by the National Bobblehead Hall of Fame and Museum. For the price of $25, you can own Sanders in his now internet-famous, cross-legged repose. 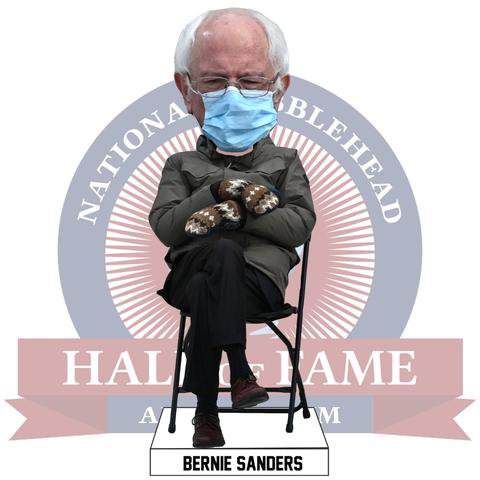 You can pre-order this Bernie Sanders bobble head for $25.

"As soon as one of our employees alerted us to the viral pictures of Bernie, we checked out Twitter and knew we had to get to work,” said National Bobblehead Hall of Fame and Museum co-founder Phil Sklar. “We think this will be another fun bobblehead to put a smile on people’s faces!”

Along with his unwavering demand that regular Americans be at the top of the agenda in Washington, D.C., Sanders took some time to address his Inauguration Day attire.

.@BernieSanders talks about his mittens and coat "You know in Vermont, we dress warm, we know something about the cold, and we're not so concerned about good fashion, we want to keep warm. And that's what I did today." pic.twitter.com/FiTCLpn95m

Reactions to Sanders' viral pose lit up social media on Wednesday as Biden took the White House and America said goodbye to the Trump administration. Here's a look at some of the best from Inauguration Day.

Our son Dave @drscll worked with @burtonsnowboard founder Jake Burton on a limited edition jacket with @BernieSanders face on the back. Bernie really liked it, so Dave got him one - without his image - for Christmas. Vermont jacket, Vermont gloves, Vermont common sense! https://t.co/P9NLMVPMgh

stop reporting that bernie wore the same coat from his once again video! it is a DIFFERENT version of the same coat that his son gave him for christmas! he liked it so much he got another one! THIS is the dad energy

Is @BernieSanders wrong though? pic.twitter.com/d2BzzYnpYf

If I’m too old for this shit was a person...🥶🤣🤣🤣#BernieSanders pic.twitter.com/tONhV1mqSi

Leaked photo of the season 14 Hot Ones premiere with @BernieSanders pic.twitter.com/Uj34AYVaOA